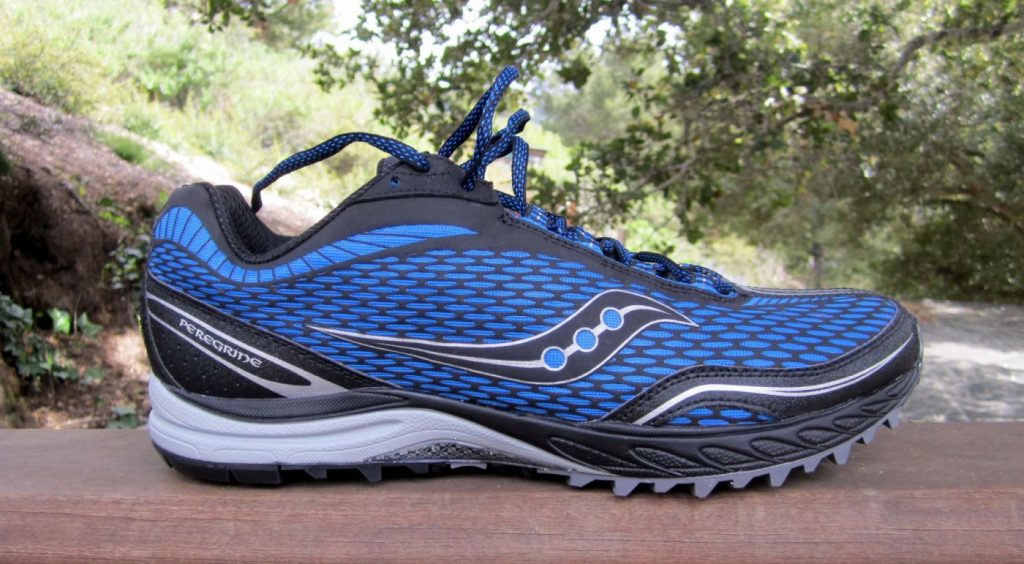 Minimal, low profile, natural … it’s all the rage in the trail running world nowadays.  But to many runners, there’s still a lot to be said for traditional trainers.  Saucony’s ProGrid Peregrine seeks a middle ground that makes both groups happy.

Last year, Saucony introduced the ProGrid Kinvara, a lightweight, low-profile transitional shoe for road runners who wanted to incorporate some of the aspects of minimalist running without giving up the features they loved in standard shoes.  (See my review here at Running and Rambling if you’re interested.) Then a funny thing happened: trail runners started using them for off-road use as well.

With the Peregrine, Saucony targets this crowd directly: it’s built on the Kinvara platform and provides the same biomechanics as that shoe, but includes some features specifically designed for rugged trail use.   It’s a transitional shoe for runners looking to make baby steps away from heavy SUV-style trainers towards the minimal and lightweight end of the shoe spectrum.

The most noticeable difference from the Kinvara is the closed mesh upper, which is a denser material than the super-thin version used on the road version.  This closed mesh is very effective at keeping out dust and debris, but you sacrifice a bit of ventilation and water drainage as well.  The whole upper fits very securely against the foot, especially through the midfoot and arch areas, with a secure heel that sits relatively low around the ankle for freedom of movement.  The toe box isn’t quite as wide as the new breed of barefoot shoes can be, but they’re wider than traditional Saucony offerings and should leave plenty of room for your toes to move freely.

In the midfoot area, the Peregrine has a mere 4mm drop from heel to forefoot, providing a nearly flat platform that improves agility and allows for midfoot or forefoot strike like pure minimalist runners practice.  There are two types of proprietary EVA used here, combining for a ride that is relatively firm; this may be a direct response to customer feedback about the Kinvara, which has been criticized as being too cushiony.  The midsole is also rather stiff, with very little flexion from heel to toe during the stance phase; this is where Saucony misses the mark on allowing natural foot motion.

One clear strength of this shoe is its outsole, with thick multi-directional lugs and sticky rubber that will get you through the sloppiest trail conditions.  Testing of this shoe coincided with the rainy season here in California, and the Peregrine handled muddy trails with ease, even on steep hills or technical terrain.

The Saucony Peregrine has some nice features that make it a legitimate first step towards minimalism, but the midsole is far too dense and stiff to truly be categorized as a natural running shoe.   It’s a good option for transitioning gradually while maintaining the protective features of standard trainers.