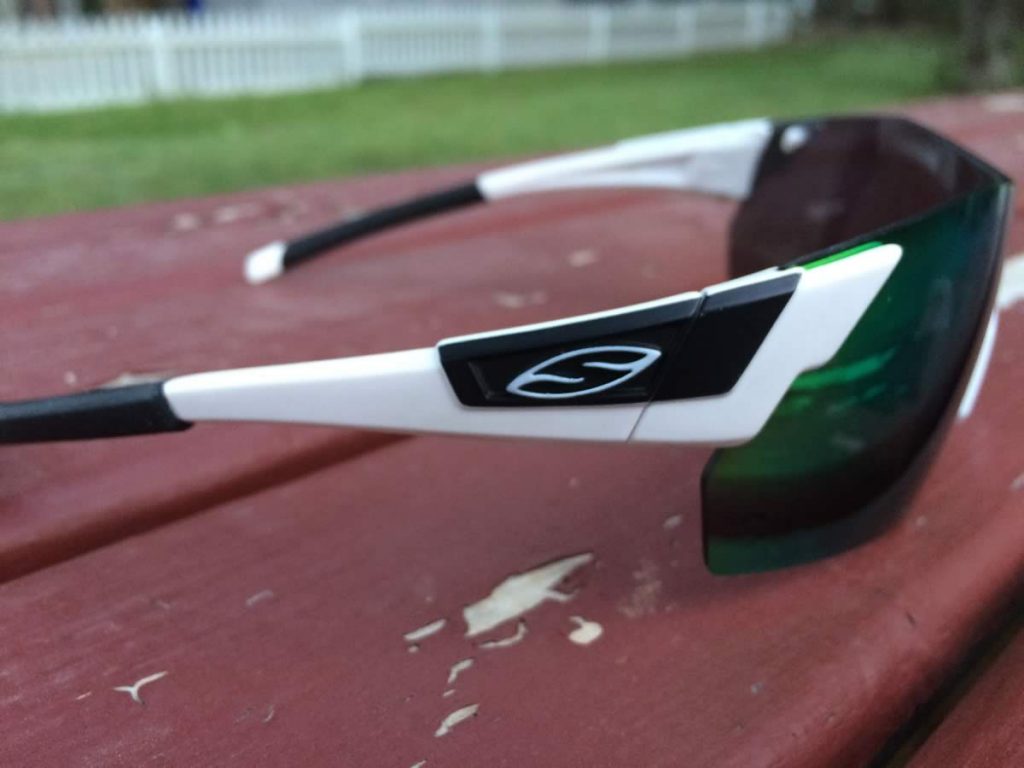 The search for the perfect cycling glasses continues. There are worthy offerings springing up all the time, varying in price, shape and intended use. Smith has put forth their PivLock Arena Max glasses to vie for supremacy within the realm of aggressive, shield-style cycling glasses and I’ve been testing them out on road and trail. 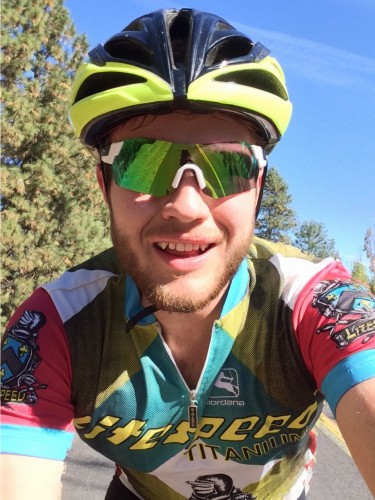 Cycling glasses are amongst the simplest piece of gear that a cyclist puts on before a ride, but in many ways it’s amongst the most essential. Glasses shield your eyes from road debris, UV rays and spraying champagne at the podium. While they do that, of course, we expect that they make themselves entirely unobtrusive so that we almost forget about them while we ride. When it comes right down to the wire, those are the important traits in cycling glasses: protection and forgetability.

It’s with this framework that I approached the Smith Optics PivLock Arena Max sunglasses. On both road and mountain bikes, these sunglasses have seen everything from miles on the tarmac to being used as a windshield on rainy days to protecting my eyes from the rooster tail thrown up by my mountain bike’s front wheel.

Smith included three different lenses with my test kit, basically varying gradations of visual light transmission (VLT) from almost nothing up to a fairly dark lens for mid-day riding. Smith makes a clear lens, which was included in the kit, which was ideal for darker, rainy afternoons that can dominate Spokane’s fall weather. Stepping up the VLT scale, I have two more mirrored lenses (the Green Sol-X and the Purple Sol-X) that each offer a step up in the light that they block. The specific lenses are not all that important — the crucial insight here is that Smith’s lineup of lenses is consistent from top to bottom in terms of how much light protection they offer. 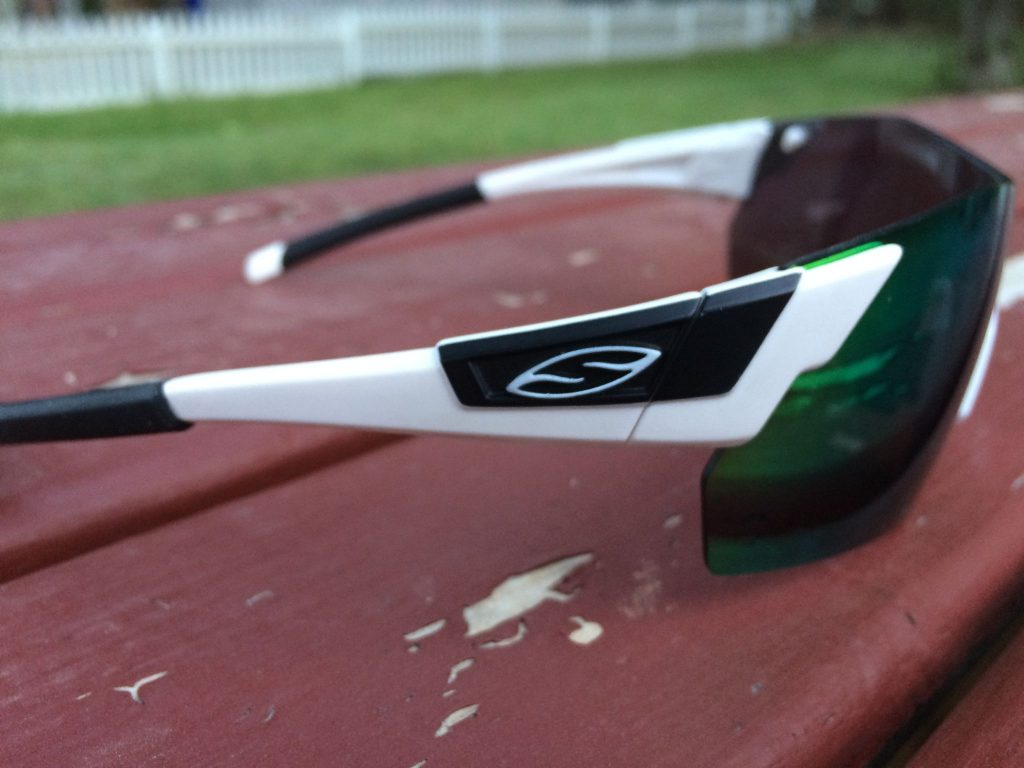 What precisely are those consistent traits that we’re looking for? Well, two key ones I look for are fog resistance and overall visual clarity. The Smith lenses have been very impressive – every lens is treated with a water and oil-resistant coating that helps to keep the lens clean and free from fog. I generate quite a microclimate when I’m active, so on colder, humid mornings I can fog up most lenses in a hurry. These lenses, however, fared better than most so if you are like me, you’ll find these more than satisfactory.

Additionally, I noticed that, perhaps since these glasses lack a top frame, it’s easier for drops of sweat to land right in the middle of the lens. Frames can help carry those droplets away from the center of vision, but you don’t get that with this frameless design.

The second category, overall visual clarity, is tougher to quantify but nonetheless is obvious when done well. Cheaper lenses tend to have distortion near the edge of the lens, or, in very bad circumstances, even in the middle of it. The Smith lenses are all distortion-free, which helps the rider to forget about the glasses when they are on.

Equally important to the lenses are the frame components which, after all, are what’s anchoring the glasses to your head. Smith’s components are creative and address many of the common problems that cyclists have. For one, the nose and temple pads attract water (from your sweat) and, when they do that, become ‘stickier’ relative to your skin. So, they stay in place and won’t slide down your nose. It’s a well-known trick and it works well with the Arena Max glasses.

Further, the temple tips are removable, which is great since that’s a part of the glasses that often tends to wear out quickly. Finally, a creative little touch is the reversible nose piece, which can be inverted to provide either a slightly wider or narrow grip on your snout. Simply pull the nose piece away from its holder, flip, and replace. 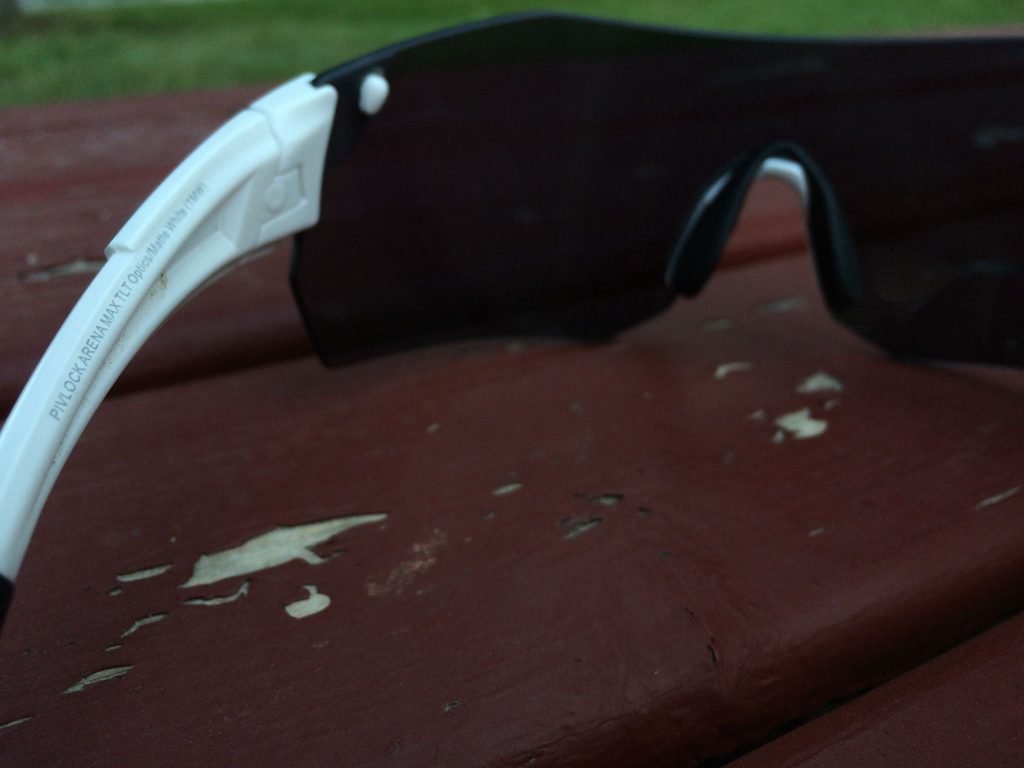 A crucial part of the PivLock series’ success is, well, the PivLock mechanism. Basically, there are holes in each lens along with indents that corresponds to a pin and catchments on the temple pieces. The goal of this system is to make switching between lenses a breeze. Without mincing words, Smith has nailed the system. Other similar products I’ve used developed slop within a few weeks of the first use, but the Smith system remains just as crisp when engaging and disengaging the temples as when they were brand new.

One last word — quality. Smith cares about presentation, and my particular unit arrived in a burly carrying case that includes tidy slots for each lens. Another carefully selected feature is the ‘snap to’ temple hinges, which have a bit of a snap to them once they lock into place. Little things like these two combine to set the PivLock Arena Max above their peers.

The Smith PivLock Arena Max sunglasses were never destined to become one of your favorite pieces of cycling kit. Rather, they were destined to be forgotten about the moment you put them on and start pedaling. They’re made for protection and not to get in your way. Frankly, they do a very fine job — no one wants to worry about their sunglasses, and these are just too busy performing to distract you from the ride.