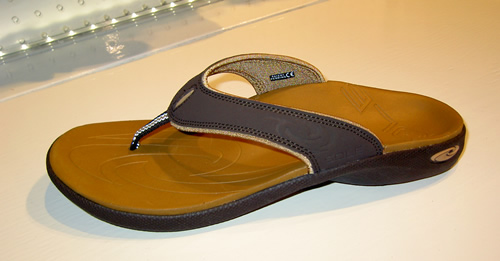 If a podiatrist was looking for a great example of a flat foot, he’d look right at mine and say, “See that guy over there? Yeah, the one with those pancake-flat feet. He needs orthotics!” And there I’ve been for several years with everything from Dr. Scholls arch supports to $350 custom orthotics.

However, no matter how much I spent on the orthotics, I couldn’t get them to work in all my shoes, so over time, they ended up in a single pair, then ultimately tucked away in the corner somewhere only to be used on occasion. I’d almost always go back to the Dr. Scholls arch supports because they were cheap and easily swapped between shoes. That was until I discovered SOLE orthotic footbeds and sandals.

Earlier this year, I posted about the SOLE Dean Karnazes signature line of footbeds. Those remain my all-around favorites and provide me with all-day comfort out-of-the-box.  With my flat feet, I get the most support by wearing the footbeds as-is without heat molding them. 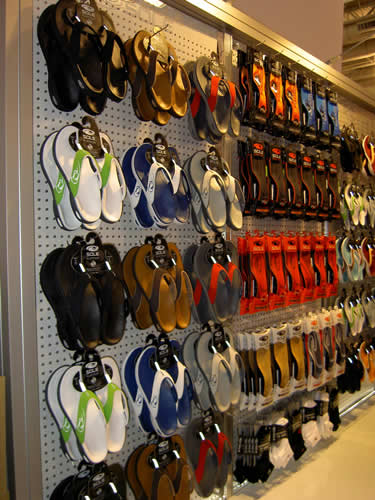 I had a chance to chat with SOLE’s Marketing Manager, Claire Thompson, while at Outdoor Retailer. She filled me in on a few cool things SOLE has been doing lately. For starters, they introduced the new SOLE Platinum Sandals just a few months ago. These are a revolutionary step forward in comfort and design. I’ve got a pair that I’ve been flogging for a few weeks now and they are the most comfortable flip-flops I’ve owned (more on that in the coming weeks).

She also mentioned a few cool things that happened recently. The first was that SOLE crashed the annual American Podiatric Medicine’s conference in Hawaii last month. One of the topics of discussion was what the podiatrists call “Flip-flop Itis”. No, it wasn’t a discussion on Hillary Clinton, but rather a discussion on the negative effects of wearing flip-flops.

Knowing this, Claire walked right into the conference, showed off the new SOLE Platinum Sandals and immediately won over the podiatrists in attendance. They are now in the process of receiving the association’s seal of approval as the only sandals they recommend. 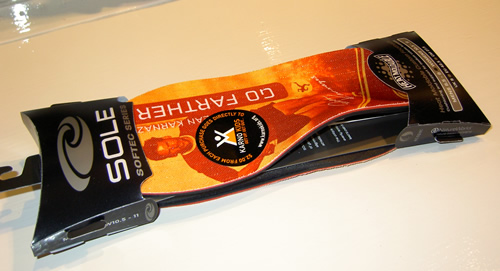 Another tidbit she shared was a study that was done by Charmichael Training Systems comparing the wattage output of a cyclist wearing standard insoles, Specialized Body Geometry shoes and insoles, Superfeet insoles and SOLE orthotic footbeds. The results were that SOLE insoles transferred much more energy (wattage) to the pedals because of the virtual elimination of any air gaps between the foot and the shoe.

So, if you want to gain an edge on the road or on the singletrack, get some SOLE footbeds. Available in a variety of styles that vary in thickness to accommodate nearly any shoe.

As mentioned earlier, even grumpy podiatrists were standing in line to buy the 250 pair of SOLE Platinum Sanals that were brought to their annual conference. The support provided by the Platinum sandals is unsurpassed in the world of flip-flops.

The foot is cradled from heel to toe with the perfect support, thus providing continuous contact and the elimination of aches and pains commonly associated with wearing sandals all day. In the two weeks I’ve had them, I’m sold and I know you will be too. Learn more about what makes these sandals tick.

The SOLE Platinum Orthotic Sandals are available in a variety of colors and sizes for $79.95. Read my SOLE Platinum Sandals review.