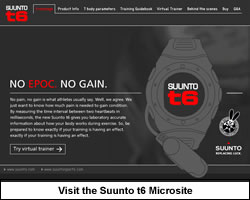 I don’t want to be too over the top at this point after only having this little wonder in our hands for a little over a month, but I can’t help myself. The Suunto t6 is hands down the best training watch I’ve ever used. First, it’s a Suunto, so you know it’s packed with all the latest and greatest features known this side of Finland, plus, it’s finally given me the insight into my workout that I’ve been missing with standard heart rate monitor watches. 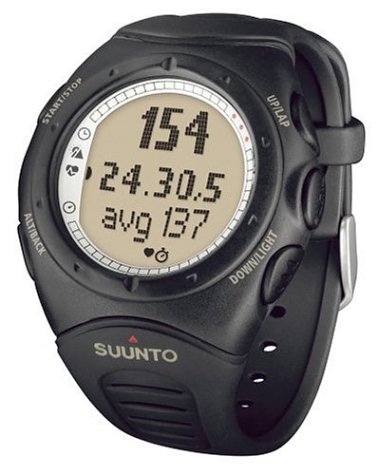 About the Suunto t6

We’ve been testing Suunto wristtop computers for years. Since the introduction of the Vector, we’ve tested the x6HR, s6, Observer, x9 and now the Suunto t6. Every one of these watches has provided that extra bit of joy from knowing your altitude, heart rate, ascent rate and total vert–to name a few. We are just like every other red-blooded outdoor techie nerd–we love data. And, we love seeing just how we’re performing on our bikes, skis or feet.

Suunto has come a long way since the Vector and the t6 is a great example of that. The smaller design introduced with the x6 in 2001 continues in many variants–all aimed at different sports and target users.

The first time I remember hearing about the t6 was from Suunto Sports Development Manager, Diana Tung while at Outdoor Retailer Winter Market in 2003. She didn’t even have a t6, but she couldn’t stop talking about how awesome it was… “It uses a mathematical calculation… measures the time between your heartbeats… measures your VO2 max… I don’t know alot about it, but it will change the way you work out.”

That conversation is now a blur, but now that the watch is in my hands, I can understand Diana’s excitement about this watch.

Here’s a little more from SuuntoUSA.com:

With the included training software, I’ve gotten more insight into my workouts than ever before.

The Suunto t6 in Action

Getting the t6 ready to go was a familiar process of putting on the heart rate belt, establishing a connection with the watch, starting the stopwatch and hitting the trails, streets or treadmill. The heart rate connection establishes quickly and accurately. I’m told that in late 2004, speed pods will be available for running and biking. The running pod will be worn on the shoe and the biking pod on the bike frame. Adding speed and distance functionality would be absolute gravy for this watch!

Usability and design are standard Suunto, so it took very little getting used to. Even if you’re not Suunto-savvy, the menu system is simple and usable. If you’ve used a cell phone much, the t6’s interface will seem intuitive.

One of the best features of the new t6 is the screen. Mine came with a bright, almost mirrored background, so the black numbers stand out better than any other Suunto face design to date. Even at extreme angles, the numbers are still visible–something other Suunto’s struggled with. Kudos to Suunto for a great face design!

For those who haven’t used a heart rate monitor before, the chest transmitter goes unnoticed. Once you’re set, you don’t even think about it. Just remember to wet the belt prior to placement–this speeds up the transmission and increases initial accuracy.

I would like to see Suunto work on their heart rate belt technology to make it even more wearable. Polar just introduced a new Wear Link strap which is soft and flexible. I’m guessing that Suunto will introduce similar designs as this technology is refined.

Suunto has had a PC interface for years and the connection has previously been with an outdated serial port connection. Well, with the T6, Suunto has introduced a USB cable to accommodate newer computers and speed up the transmission process–both good things!

For years, you hear about world-class athletes, like Lance Armstrong, having a crazy-high VO2 max. This measurement is a great benchmark for your overall fitness level. The VO2 max measures the amount of oxygen carried in your blood–the more the better, and the more, the higher your fitness level. VO2 max is something that can be increased over time and effort, but some people’s chemical make-up’s lend themselves to higher VO2 max readings. Knowing your VO2 max is key to extending your fitness level and maintaining a high level of fitness for endurance activities.

Energy Post-Exercise Consumption measures your overall training effect. This measurement, like VO2 max, has previously only been available in laboratory settings, but is now available in the Suunto t6. The EPOC readings are key to measuring the overall training effect of your exercise. EPOC increases quickly with intense interval training, but may not increase quickly with long, non-strenuous activity. The key to this is the higher your EPOC, the more you will train your body over time and the higher your fitness level will be.

If you want more details on all the parameters measured by the t6, download the Suunto t6 Training Guidebook (PDF).

Without a degree in exercise physiology, I can still immediately benefit from the analytics provided by the new Suunto t6. This training tool, combined with the Suunto Training Manager software instantly provided me with graphs and charts to show me how effective my training was or wasn’t. That alone is worth the purchase!

Many of us have used heart rate monitors for years, but haven’t been able to grasp just how effective our exercise was over time. Now, you can view exactly how your training is going. You can better understand the physical makeup of your body and how it reacts to different training routines. You can finally understand what you need to do to increase your overall fitness level.

The Suunto t6 is a modern wonder and a trusty workout companion that any serious athlete wouldn’t want to do without!