By Kevin Glover on August 31, 2018 1 Comment
Setting routes in The North Cascades.

I like reviewing packs and, I really like reviewing really good packs. The Phantom 50L, part of The North Face’s Summit Series, is a really good pack. It’s been my go-to option for anything extended in the alpine recently, whether that’s skiing in the spring or climbing volcanos in the summer. Here’s our review after a summer of fun. 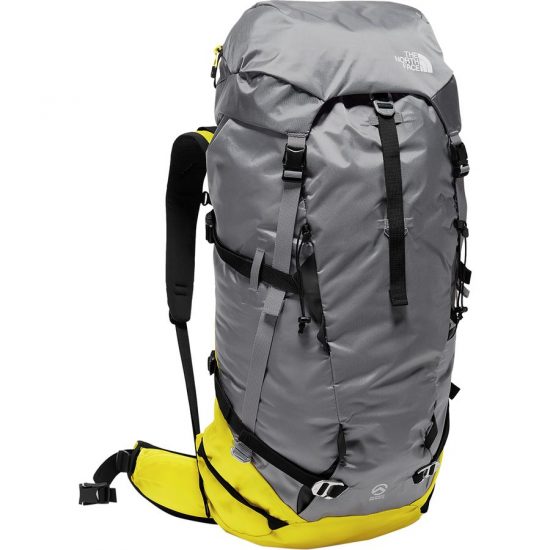 A good alpine pack should be a few things. It should be light; mostly because that is the definitive trait that all modern gear strives for. It won’t compete if it’s not. It should also be versatile; single-use features feel obsolete in comparison with attachment points and fasteners that know how to multitask. It should also be fairly comfortable; gone are the days when mountaineers are willing to shoulder hemp-and-cotton contractions with thick webbing straps. We like durability, too, but in the current climate of emphasizing ultralight gear, durability often goes by the wayside. Anywho, these are the qualities by which I’ll be judging the Phantom 50L.

In terms of sheer feather-weight street cred, the Phantom 50L is remarkable. I remember not too many years ago when mainstream ultralight packs were considered top-shelf if they were sub-4lbs. The Phantom 50L, in the S-M frame size that I tested, runs 2lbs 6oz. By comparison, the much-lauded and rather niche CiloGear Dyneema WorkSack 45L runs 3lbs 8oz. This is not an entirely fair comparisons since the WorkSack definitely edges out the Phantom in terms of some things like versatility and durability. However, CiloGear is known as being a standard in ultralight backpacks. On the other hand, the Featherlight Freedom 50-55L runs just 1.9 pounds in its heaviest configuration; so, clearly, there are more strictly ultralight options out there.

What impresses me about the Phantom 50L, though, is that it’s a mainstream mid-2lb pack coming at consumers from a huge name like The North Face for a (basically unbeatable) price – $189. That’s remarkable. 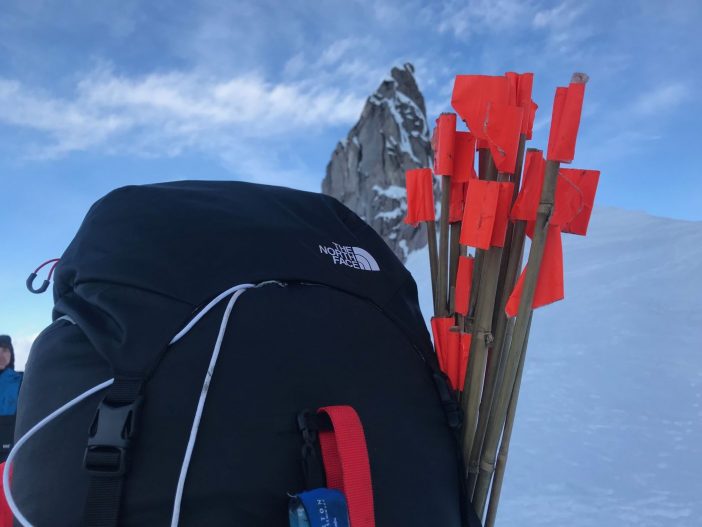 The floating lid is versatile and functional

The Phantom also has some very versatile traits. I particularly like the lid design. The lid is removable, it floats, so you can adjust its height on both the front and the back to accommodate bulky things like helmets on top of the pack. If you choose to remove it, there’s still a fabric tab and clip to pull over to secure your rope. Crucially, the straps are removable when not in use and, equally crucially, they do not easily fall through their little webbing attachment loops when you do need them. I once left a belay with a similarly ‘versatile’ pack and looked down to find that one of the removable straps had removed itself.

Other parts of the pack that are non-essential are removable. This includes the frame sheet, but also the hip belt. That’s a nice feature. They’ve done a better job on this than other packs I’ve tested, with one memorable big-name pack requiring the user to cut fabric before removing the hip belt. The Phantom’s solution is quick and easy. The pack’s compression straps do a great job, with two on each side angled to pull the load up and in. The top strap has a buckle, so you can stash snowshoes or what have you underneath them. 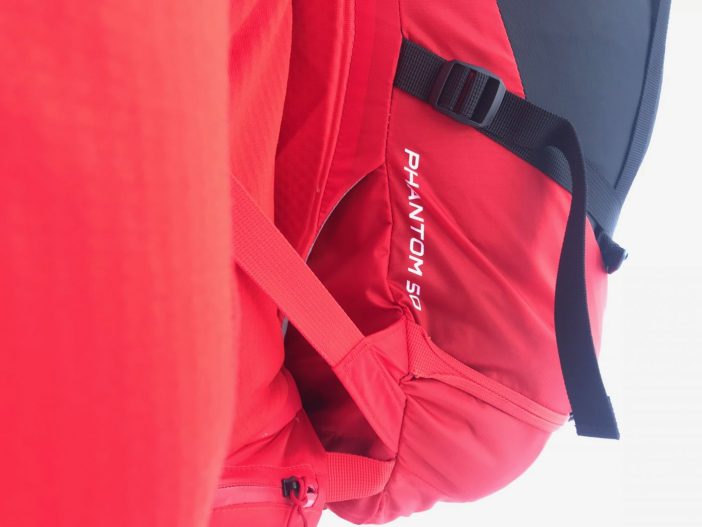 A look at the ski loop and lower compression strap

The pack’s suspension is effective, although the ultralight aspect does bring some sacrifices. For example, the padding on the straps is definitely minimalist, meaning that you can certainly find a more comfortable haul on other packs. This is a reality of going ultralight; however, The North Face chose a mid-density foam that is highly functional in that it won’t pack down into your shoulder but it’s still soft enough for comfort. There are load lifters but, due to the pack’s minimal frame construction, these aren’t attached to anything structural and they’re a bit ineffective. I have a big chest, and I found that the sternum strap spent a lot of time maxed out; however, the straps also have a gentle S-curve which helps out on men with muscular chests or women.

The only feature that confused me was the tool attachment points. The North Face built this out of two webbing straps with hook-style attachment points. This is great because it can accommodate any number of weird sizes of tool heads. However, I had a heck of a time keeping the hook from slipping out of the webbing look that it attaches into. This wasn’t so much a problem on approach, and the tools are out for actual climbing, but on the descent as I either glissade or jolt along like an 80’s Dodge pickup on a dirt road the tools kept bouncing out. They would then dangle freely by the elasticized upper attachment points (which, by the way, work quite well). I would either be alerted to this by a partner or by a sharp stab in my flank, at which time I’d drop the pack and fix it. Was I doing something wrong with how I attached my tools? Maybe, but I tried a few different configurations on the trips I took. I like to think I’m at least as smart as the next climber — but, admittedly, this is not a very high bar. 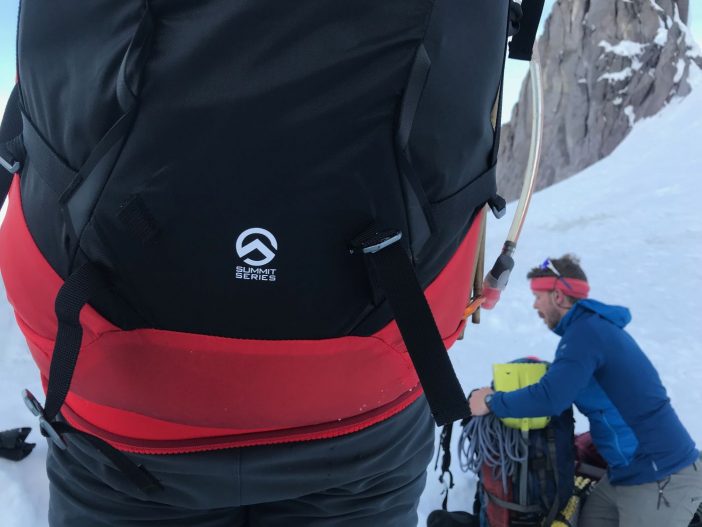 The bottom of the pack is reinforced, and it’s sleek so it doesn’t catch on anything

I particularly like how this pack loads. Some alpine packs, notably the very popular Gregory Alpinisto, have a really weird shape that results in some odd empty pockets. The Phantom, in comparison, is basically just a long slim tube. This keeps it feeling trim so that it doesn’t catch on stuff if you’re in a tight spot, although the sheer height can throw you off if you haven’t balanced it carefully. You do have to pack it carefully since it’s so deep and long, but it definitely swallows a lot of gear pretty gracefully. There is also a tiny little pocket on the left hip-belt which can hold that gel packet you’ve been trying to avoid slurping down too early. 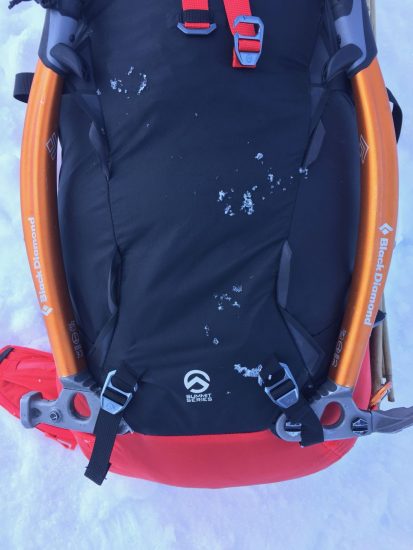 The hook-and-loop design of the tool attachments didn’t work too well for me. Even when I run the straps through the holes in the tool heads, the hook still wiggled out of the loop.

In terms of durability, the pack gets surprisingly good marks for being so light. The materials are pretty strong, with the pack featuring 210D nylon reinforced with 840D nylon in critical spots. That’s great. The tool holders feature a pocket for picks, which is a great way to keep from snagging holes around the bottom of your pack over time. The A-frame carry straps are strongly built and I expect them to last.

Want an ultralight pack? Don’t want to shell out the big bucks for a boutique brand? It’s hard to beat the Phantom 50 for sheer light weight and availability. It’s also quite durable and comfortable, and while the feature set is trim it’s very versatile. It’s a true climber’s pack, and it will continue to be a go-to for me as the winter season of touring and ice climbing starts to roll in.