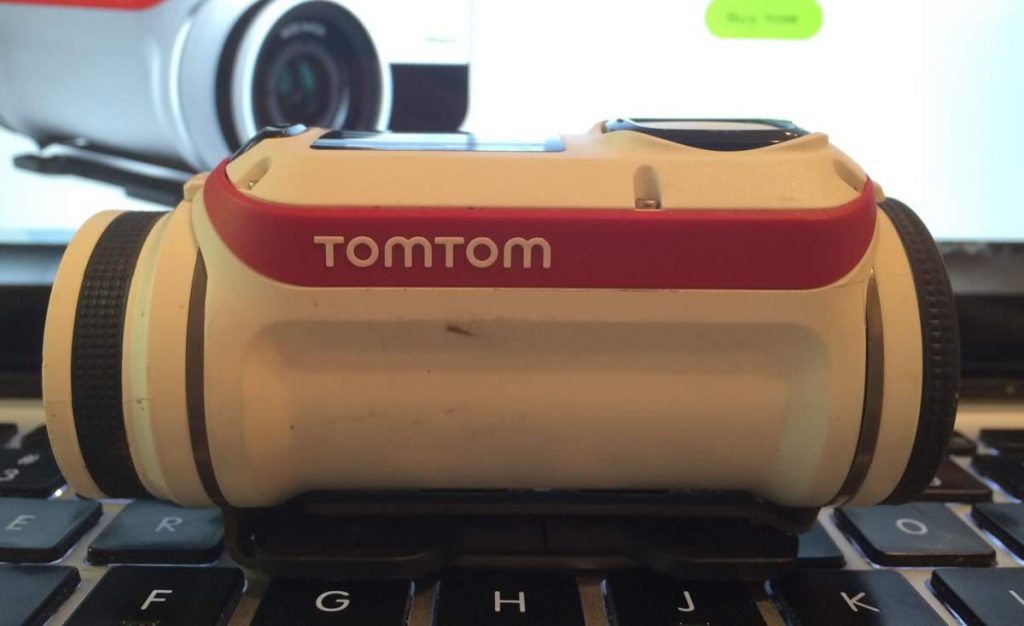 TomTom is better known for their GPS devices than anything else. Earlier this summer, though, the well-established brand waded into a completely new field for them – action cameras. Why would they venture out of their niche and into the big, competitive field dominated by, well, people trying to go pro off of user-shot footage? The answer is simple, and delightful for cyclists, climbers and adventurers everywhere – TomTom has something unique to offer, and it’s their Bandit Action Camera. 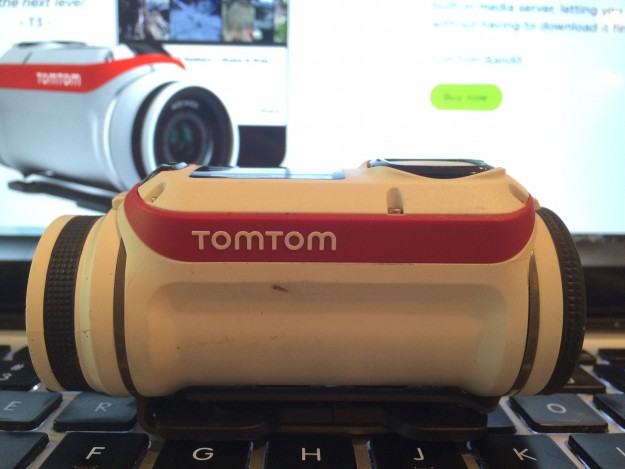 The Bandit steals the show

I think it’s fair to say that the TomTom Bandit is aiming at one of the biggest needs of action camera users. There are lots of cameras out there that capture epic footage, and lots of athletes that are sponsored to produce epic content. What about the average joe user or weekend warrior that wants to ride (or ski or climb or skate), shoot and then head home without having to do hours of editing work? Editing software can be a pain to manipulate and more often than not takes some solid computing power. Enter the Bandit: a camera with the technical chops to stack up with the big boys, but features an ease-of-use that hasn’t yet been matched by other cameras.

That ease-of-use is manifested in TomTom’s app, called simply ‘Bandit,’ and is available for iOS and Android devices. It’s fairly intuitive, but does take a little work to get the hang of. The Bandit app syncs with the camera wirelessly over a Wifi connection and displays the camera’s input in real time. It’s amazingly fast – there is very little delay between pointing the camera at something and seeing the image or video appear in real time on the screen. It’s an excellent way to frame shots or to verify the quality of a take instantly. For people looking to go pro using footage from their action camera, this is a feature that’ll speed up the process considerably, enabling more time for the actual activity. 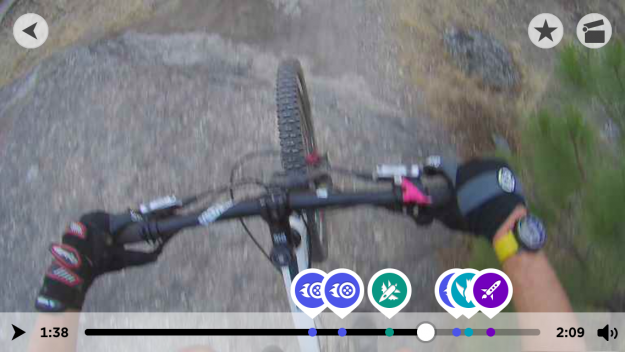 The app’s menu features several sections: Viewfinder, My Library, Create a Story, Camera Status and Preferences. The My Library one is especially significant. All of the camera’s stored content appears here, arranged chronologically. From here or from the Create a Story panel, the Bandit starts to show just how unique it is. Using just a shake of your wrist, you can have the Bandit software to create a ready-to-share video that pulls footage from your best moments.

The camera has a number of sensors including a GPS and an accelerometer, so your ‘best moments’ are actually quantifiable – the camera automatically ‘tags’ important moments in your ride based on things like speed and impact. So, if you wipe out hard the camera will know; if you accelerate like crazy, the camera will know; if you reach your max speed, the camera will know and tag that section of film for later. Then, once you get into the Create a Story panel of the app, it’ll pull from these ‘tagged’ sections to create a video based off of your adventure’s most exciting moments. You can also watch the film and manually tag highlights.

Editing the clips is simple and intuitive, though I wouldn’t call it ‘powerful.’ The options are somewhat limited for what you can do, but that’s something TomTom could theoretically improve upon. Things like clip transitions or a more powerful editing engine for selecting the timing and length of clips are all things that could be added, but on the whole the app does an excellent job at quickly producing content that can then be uploaded live from you device. So yes, it’s powerful in a sense, but not in the same way that a desktop computer is. The app is a major highlight of the whole Bandit package. 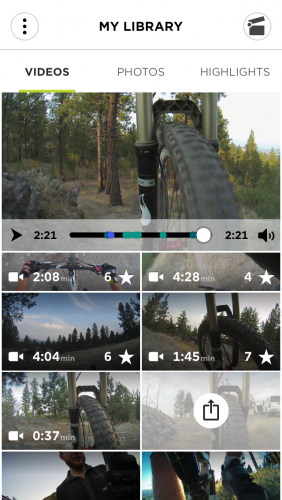 TomTom went for a different profile from the norm when they designed their Bandit. It’s the opposite of blocky, with a longish cylindrical profile. It’s a fairly sleek outer profile, with a display on top surrounded by four directional buttons, and then two start/stop buttons on the back and top of the camera respectively. The display has options for Photo, Video, Slow Motion, Time-Lapse and Cinematic as well as some basic settings and information for wifi connectivity. All of this is more easily accessed by the phone app, but it’s also great to have on hand here in case, for some reason, you can’t pair with your phone. Also, the mount swivels around the circumference of the camera, which is an excellent feature for position-and-go mounting. The camera is *almost* waterproof – it just needs an additional IPX-8 lens cover. Otherwise, the body is sealed and ready to go.

Inside of the camera is what’s affectionately referred to as the ‘batt-stick.’ It’s an integrated unit that also houses the memory card. When the battery is dead after its roughly 3 hours of juice (at 1080p/30fps) just pop it into any USB slot. It’s an easy solution and doesn’t require keeping track of any extra cables.

In terms of filming, the default 1080p is excellent for average users on average days. Putting the camera on Slow Motion drops the revolution to 720 but enables a frame rate of 120fps, though this can be fiddled around with in settings. Cinematic mode yields 2.7k and 4k shooting options, but the 4K ability is limited to 15 fps so except footage with great resolution but choppy playback at that setting. There’s also the option to shoot 2.7K at 30fps, which will look great on 4K displays and still plays back smoothly. 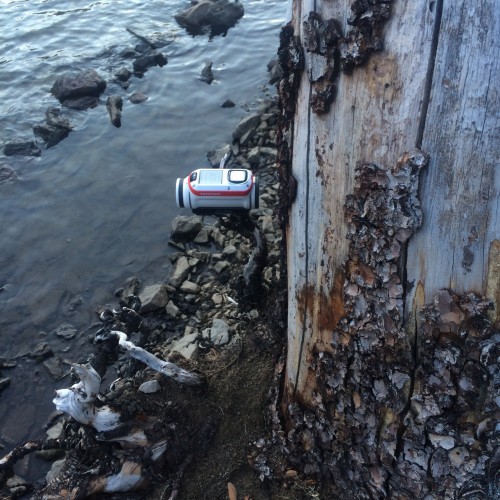 The camera is capable of attaching to TomTom’s proprietary mounts, but they also sell a more complete kit that inclues a GoPro adapter, opening up an enormous range of mounting options. I ran a mount on my bike frame and on my helmet; I did notice that the added weight on my helmet was pretty significant. In fact, this camera is noticeably heavier than, say, a GoPro, and that is something for climbers and cyclists to think about if they’re going to stick the camera on their head.

Using the camera is intuitive. The large button on the back turns the camera on and starts filming, which is announced by a happy sounding series of beeps. You can also control filming from the app, but I found this to be pretty fickle. The camera needed to have pretty direct contact with my phone in order for the wifi to work, so if I started filming from the app and then tossed the phone in my Camelbak for the ride, the wifi would disconnect. The frustrating thing here is that the camera stops filming when the wifi disconnects; I suppose that could be a nice feature, but I found it to be a hassle. My advice is to initiate filming from the camera controls whenever possible.

This one’s simple: it’s a great camera, and it’s perfect for those people who love to ride and shoot but don’t like to edit. I would never spend time editing my own footage, so this is an ideal camera for people like me. I used it while alpine climbing and mountain biking and it excelled at both activities – definitely a faithful companion, and one that has already made big waves in a competitive field.