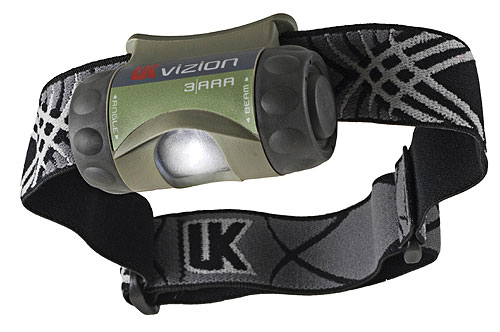 The UK Vizion 3AAA Headlamp is new to the outdoor market which is stacked with headlamps. Seems like everyone wants in on the LED market and slapping your logo on something mass produced out of China is the method most use. Seriously, just looking at my gear closet I came up with 7 different models of headlamps from 3 different manufacturers. So when I first set eyes on the UK Vizion at the Winter Outdoor Retailers show in Salt Lake City I was skeptical that a new entry to the market could give me anything more innovative and useful that I hadn’t already seen. Not only was I wrong in my assumption about the quality, I’m happy to say that I have been pleasantly surprised with the performance.

UK, which stands for Underwater Kinetics, has been around for over 30 years making underwater performance lighting, injection molded protection cases and numerous innovative accessories for both underwater and above water use. Their innovations and products have withstood the depths of the seas from California where they are based to the North Sea where conditions demand equipment that is bomber and will last. As rare as it is these days their products are made in the USA and are built with function in mind, not from the need of yet another product sku to round out their catalog.

One of the interesting features of this headlamp over other brands is the technology surrounding the battery location, namely the built in heat sinks which transfers heat way from the LED and the circuitry which monitors the temperature of the LED and cuts back power when it does get too hot. The batteries surround the light, the heat sinks and the circuit. (seen in the image below) This accomplishes two things. 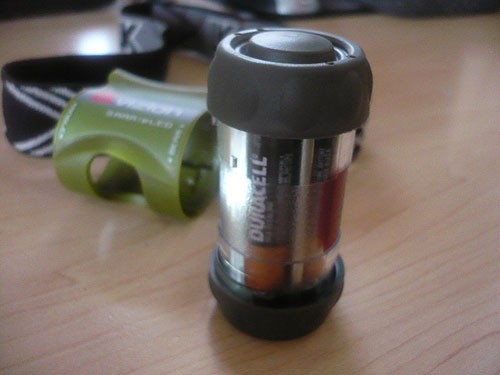 I tested this headlamp in three very different uses; Backcountry skiing early one morning, winter camping in a snow cave and while snow blowing my driveway late one night. The reality is that a headlamp has many purposed aside from just hiking. I wanted to see if this thing would hold up and perform.

Perhaps like me you’re thinking that with the batteries up front and all the technology that it would add up to a heavy headlamp. With 3 double A batteries it weighs just 3.9oz and on my head it didn’t feel heavy. I thought it may also “bob” as other headlamps do with 3 batteries up front but the generous width of the strap did help to keep it feeling snug and in place. Even while digging out our snow cave it was comfortable and in place the entire time.

One of the features I liked most about this headlamp when using it in these winter conditions was the size and location of the on/off button.(seen in the image below) Most of the other headlamps, heck all of my other headlamps are near impossible to turn on/off with my gloves on. Worse yet with mittens. While snow blowing late one night wearing mittens I turned the UK Vizion on without a hitch. No fumbling trying to find the button nor once I found it no trouble to push it. It’s generous in size and located on the left side of the lamp. The ENTIRE left side is the button.

The other side of the lamp is flat which is nice in case you need a camp light. The entire middle tube comes out and then seals back together thanks to an o-ring, thus making a fully functional camp light if you need one. While in the snow cave I put this on a “shelf” that I carved in the wall of the cave and it made for some nice no hands light for the entire cave (we had 3 people in the snow cave). 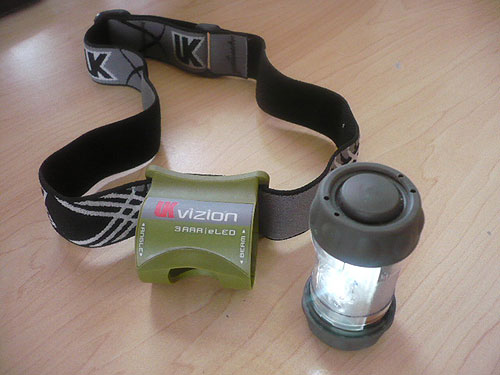 The housing doesn’t hinge like most headlamps. Rather the right side of the headlamp is actually a rotating knob that lets you rotate it to focus the beam up or down. The left side where the on/off button is rotates to let you choose the type of beam you project. Focused, dispersed or red night light. It does take a bit of getting used to if like me you’ve never had a head lamp that functions like this but it’s simple and easy to figure out.

The UK Vizion headlamp not only suprised me with a couple of useful features it uses technology that makes sense and works rather than making for nice marketing fluff. The other thing that makes sense is the $29.95 price point. My wallet likes that. I’ve reached for the UK Vizion more than any of my other headlamps for outdoor AND indoor uses this past month. It’s a keeper.

Read about the UK eLED technology