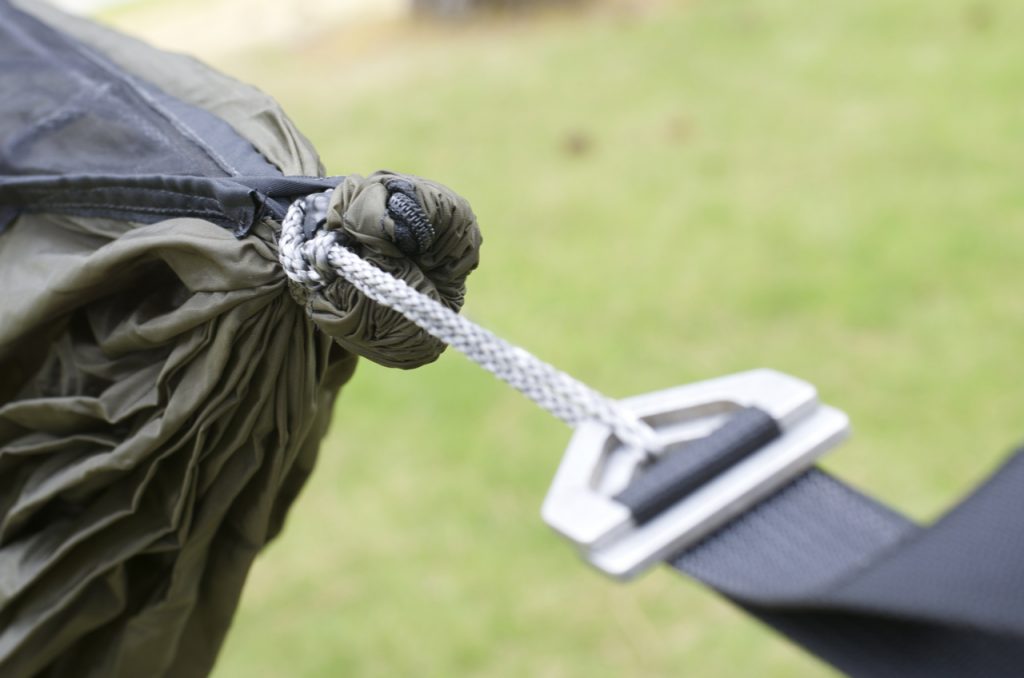 Have you ever slept in a hammock?  To me, they’re a bit of an enigma – when I was younger I never quite managed to master the physics of the comfortable yet unexpectedly aggressive contraptions; I fondly remember getting bucked off into the rock garden that our hammock sat above.  Now that I’m older and stronger I needed to confront the beast again – enter the WarBonnet Blackbird Hammock. 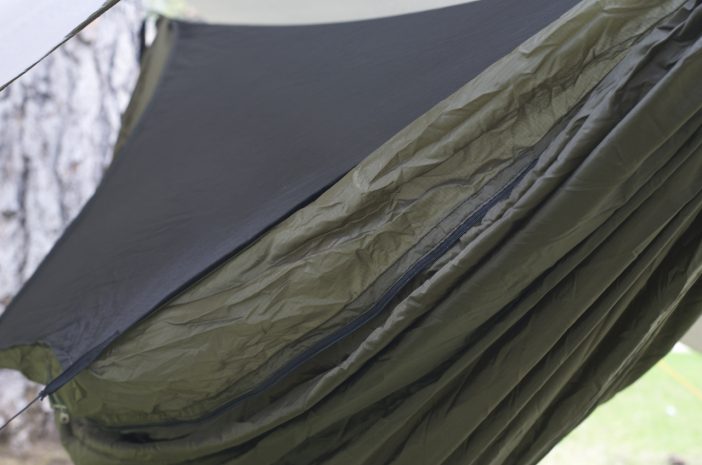 There’s a solid chance that you’ve never heard of WarBonnet Outdoors – that’s going to change right away.  WarBonnet is a perfect example of the awesome, US-based companies that are producing their gear right here in the United States.  The Evergreen, CO based company is a classic garage start-up that’s been run by the family (with a few employees) since 2008.  When you email the company with inquiries, there’s a good chance you’ll talk to the person who sewed your hammock. As is true with the best of small companies, they know their products inside and out and can offer excellent advice and insight into hammocks and hammocking in general.

Hammock camping is simple and beautiful – find two trees and string yourself up in between them.  The hammock being tested in this review, one of WarBonnet’s lightest models, weighs just over two pounds including webbing and buckles, making it lighter than all but the most expensive tents.  Another boon is that hammocks don’t leave any impact on the ground like tents do, but you still need to be careful to choose trees with a durable bark that won’t be damaged by the load put on by the straps.  For example, hammocking can be very harmful to a tree like aspen which has a living bark that’s easily damaged by loaded straps moving across the bark.   Mitigate your impact on the trees by placing small sticks between the strap and the bark to distribute the load.

These are all important things to keep in mind, but let’s dig into the hammock itself.  The Blackbird Double Layer 1.1 is about as technical as a hammock can get; it’s equipped with full-coverage mosquito netting and features a storage shelf and innovative footbox.  With WarBonnet’s optional extras, (namely the top and bottom quilt) you can even extend the hammock’s useful season into the winter.  It’s wise to purchase one of their silnylon tarps (I’m using their Cloudburst) since, otherwise, the hammock becomes a big tub when it rains.

Lastly, WarBonnet makes a variety of hammocks and even the Blackbird has quite a few different models.  WarBonnet differentiates their products by the denier of nylon weave in the fabric body (mine’s the lightest weave with 30D nylon) and whether or not the hammock is built with one layer of nylon or two.  For example, their heaviest model is the Double Layer 1.7 which can support up to 400 pounds – in contrast, my Double Layer 1.1 can support 275 pounds.  The price is the same for both, but by going up to the Double Layer 1.7 you add 7oz.  For further customization, you can choose from three different suspension types (ie, the strap and catch combination that hangs your hammock from the tree) but really they all work quite well; I’m using the simple strap-and-buckles system. 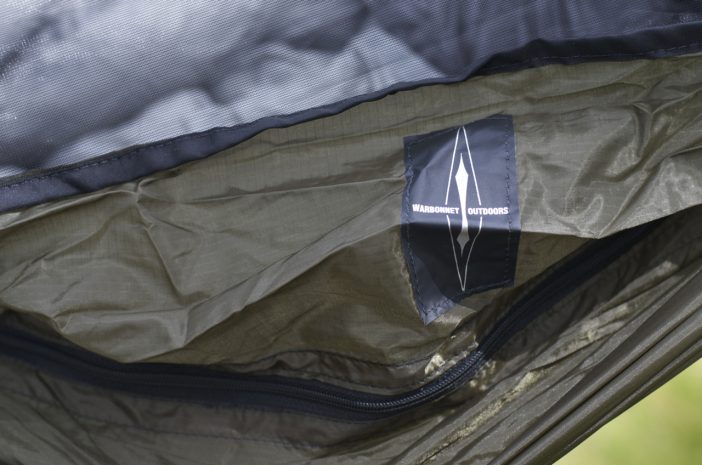 Alright, we’re finally here – it’s time to look at the hammock itself.  I’ve been able to use this hammock in a wide, wide variety of shoulder-season conditions as well as on a few lovely spring evenings.  From the skeeter-infested Whitebark Pine stands at 8,000 feet near Lamoille Lake to rainy, murky nights near Priest Lake this hammock has really been through the ringer and come out shining.

As I mentioned above, the hammock features a two-way main zipper that runs the entire length of the hammock and encloses the user in mosquito netting.  At times, this has really felt like a lifesaver – imagine the feeling of laying in a hammock looking up at the star and knowing that all of the gnats buzzing around outside can’t bother you.  If you live in heavy bug country, mosquito netting like this is essential and bigger-name companies like Eagle’s Nest Outfitters simply don’t offer an integrated bug net with their hammocks.  So far, the mesh is doing just fine with no substantial holes or runs – it’s a given that these will occur eventually so be prepared to fix them when they do. 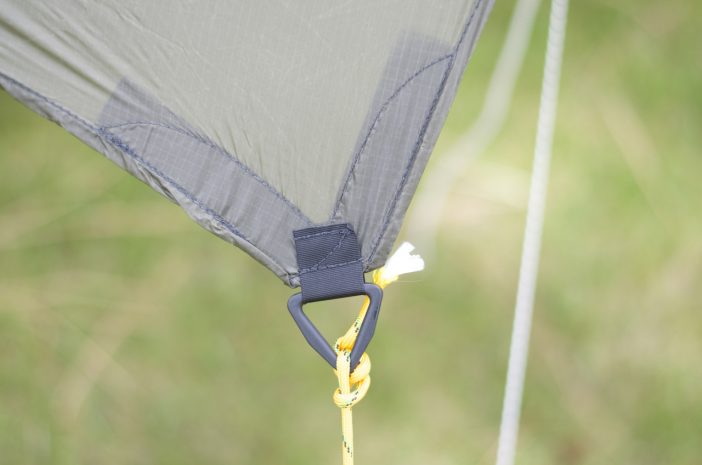 WarBonnet Outdoors took pains to create a hammock that was as functional as it is enjoyable – the two square foot gear shelf is a perfect example of this philosophy.  On either side of the hammock there’s a length of cord and a bungee that you can guy out to a stake or a tree to give shape to the hammock.  One the side opposite the zipper (really the right side as you’re laying in it – there is a proper way which I’ll talk about) there’s an extra panel of fabric that the guy pulls out in order to create a handy little storage space.  When guyed out firmly and with weight in the hammock it’s sturdy enough to support a pair of boots and a headlamp and keep it pulled out and away from you while you sleep.  It does need to be strung out rather firmly, but it becomes a very handy feature that goes a distance towards alleviating the storage headaches that hammock camping entails. 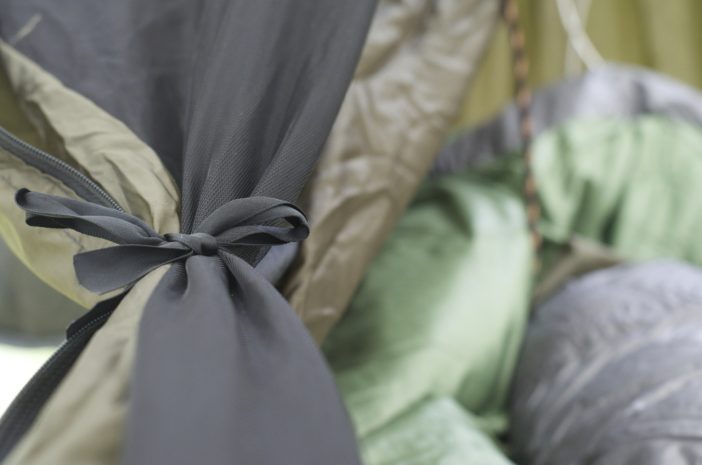 Perhaps the single coolest feature of the hammock is WarBonnet’s unique footbox.  When you lay in a normal hammock your body falls naturally into the curve of the hammock.  That’s usually a fairly comfortable position, but it can become trying when you’re not used to it or if you’re using an uncooperative sleeping pad.  WarBonnet’s solution goes something like this: if you shift your body to lay at an angle to the fall line of the hammock, a special area of extra fabric at the foot of the hammock expands and your body naturally flattens out in the hammock.  It’s tough to describe, but the key point is that WarBonnet’s creative thinkers have come up with a solution that really contributes to a great night’s sleep in a hammock.  By the way, this is what I meant when I said there’s a ‘right way’ to sleep in the hammock – the footbox fabric is sewn in opposite of the zipper, so the zipper needs to be on your left in order to use it properly.

By the way, it’s worth noting that this ‘flatness’ is actually something of a holy grail amongst the connoisseurs of hammock camping – the fact that the Blackbird achieves it so well shouldn’t be taken lightly amongst us folks who have mostly used tents or simply slept on the ground in the past.  Additionally, this is really quite a roomy hammock – I could easily move my arms up under my head without fighting the fabric.  There’s plenty of room in the shoulders and down throughout.  I personally slept like a baby in the Blackbird – far better than I normally do on the ground. 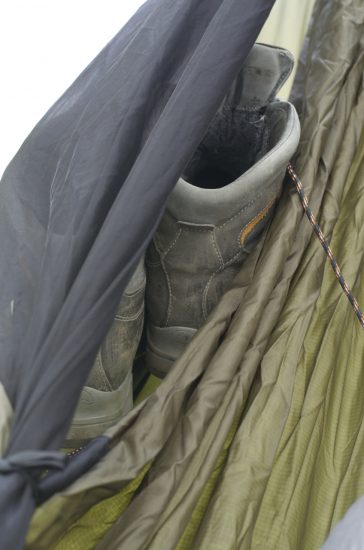 The last feature of the Blackbird is what puts the ‘double’ in the Double Layer monicker.  My hammock features an additional breathable nylon sheet so that you can slide a sleeping pad between the layers for the night.  This feature was, to me, a must-have; one of the few problems with hammock camping is that the sleeping bag tries its very best to end up on top of you rather than the other way around.  The fabric sleeve curtails much of this problem but I’d recommend using light, flexible pads rather than high-volume inflating ones.

I’m not an expert in the arcane world of hammock camping and I know that the bulk of our readers are traditional tent-users or ultralight minimalists.  While testing this hammock I’ve looked at other models that other friends have known and compared notes with folks about the broader hammock scene. After all of this, I’m convinced that WarBonnet is making some of the best hammocks available right now and I would particularly recommend the Blackbird – it’s got such a great set of features and there are plenty of options for weights and fabrics.  For solo outings or with appropriately-kitted friends, the WarBonnet Blackbird is my new go-to sleeping solution.