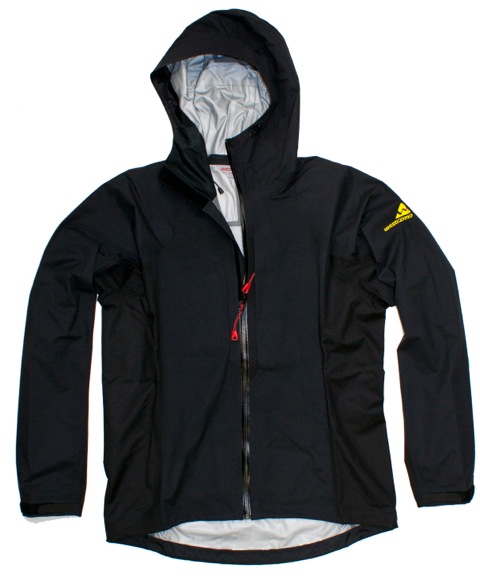 An unreal feat in the outdoor industry, Westcomb has gone from concept to launch of an entirely-new and innovative shell in 90 days. The new Shift Hoody features the world’s lightest incarnation of Polartec NeoShell on the market (a mere 11 oz) and shows the world that locally-designed and produced garments can flourish and compete in an offshore world.

Granted, this jacket is made to be as svelte as a runway model, but no question this remains a huge feat to have delivered a field tested, well-designed, functional and durable jacket in less than 90 days. I think it’s remarkable and should serve as an example of what can be done elsewhere in North America with other outerwear manufacturers.

Read the official release from Westcomb on the Shift NeoShell Hoody:

Not as a name, not as a prototype, not as an idea.

Yet this month, the Shift will debut as the newest, most innovative Westcomb Outerwear creation to date, arriving on the shelves at more than a dozen retailers nationwide.

At 11 ounces, the Shift is Westcomb’s – and the world’s – lightest Polartec® Neoshell® jacket, easily besting the previous record holder: the 14-ounce Westcomb Switch. In addition to setting a staggering new standard for lightweight performance, the Shift also upends the conventional timeline for manufacturing: deftly condensing the “traditional” timeline of inspiration, creation, design, manufacturing, sales and delivery from as much as two years to less than three months

“The breakthrough of the Shift is about more than just an evolution in high performance lightweight gear. It’s a fresh approach to how outdoor equipment can be crafted and distributed,” said Alan Yiu, president and lead designer at Westcomb. “This is a big shift in the manufacturing timeline, but it’s also a significant shift in attitudes and perceptions about how the outdoor industry is expected to work.”

The Shift idea was directly fueled by Westcomb’s longstanding commitment to domestic manufacturing. Owning and operating its own state-of-the-art manufacturing facility in Vancouver, British Columbia, Westcomb’s local staff of designers, tailors and seamstresses have always operated in a nimble, effective manner.

With the Shift, however, Westcomb is pairing its most innovative lightweight design with its most aggressive manufacturing strategy, ever.

“This is really just a step forward in doing things the Westcomb way,” added Yiu. “In addition to creating the ultimate backcountry shell, the benefit of the Shift process is that we’ve created something that’s not just responding to market trends. It is the market trend.”

Soft for extreme comfort, waterproof for Pacific Northwest winters, and lighter than a small bottle of water, the Westcomb Shift is made primarily of Polartec NeoShell® – a technical fabric whose current buzz and demand is so strong, its the equivalent of the cool kid from California who shows up just in time for senior year.

Showcasing Westcomb’s signature creativity and detail, the Shift maximizes weight savings in numerous micro-adjustments including a strategic refinement of seam usage. By using narrower, 2-ply seam tape (as opposed to 3-ply), the Shift smartly saves more than 60% of the weight from this specific category.

To ensure strength and durability without adding weight, the Switch features 20 stitches per inch (SPI) top-stitchless construction – a measurement which exceeds industry standards by at least double, and enables a lifetime of rugged use.

The full list of features on the Switch include a Napoleon Dry Pocket that protects and provides easy access to crucial gear and essential items; single-hand adjustable hood and waist; Velcro cuff closures and an internal media pocket.

Blending a perfect Westcomb fit, the year’s hottest fabric, and an ideal list of features, the Shift seems like it was made-to-order for the needs of spring 2012.

“When we came back from Outdoor Retailer in February, we were exhausted from the trade show but saw a clear opportunity. Instead of taking all that beautiful feedback about what retailers really wanted right now and applying it to 2013 or 2014 – which is what ‘normally’ happens in the outdoor industry – we decided to make a deliberate manufacturing shift and create a new product for this season. Because we can,” said Gabriel Cote, Westcomb brand director.

For the average consumer, the thought of designing a market-perfect performance jacket in February and delivering it to store shelves by May is probably no big deal. But for retailers in the outdoor industry, the idea is as foreign as accepting Chinese currency.

The pace of “creation” in the outdoor industry can be exhaustingly lengthy. Even the best ideas can take years to trickle through the production process: starting as a concept, working upward through design and sourcing, materializing as prototypes and sales samples at a trade shows, being scheduled for manufacturing, shipped to domestic warehouses, and then finally delivered to the retail floor.

In contrast, the timeline for the Westcomb Shift began the first week of February, when Westcomb returned from Outdoor Retailer. By March 1, the first prototypes were built in Westcomb’s Vancouver factory. By April 1, field testing of the prototypes had been completed and final sales samples were delivered to key accounts. By April 15 the first retail orders were confirmed. And by May 1 … the Shift shipped to retailers throughout North America.

“What we’ve done is to condense several aspects that traditionally take an incredibly long period of time into an incredibly short and nimble time frame,” said Yiu. “In the old way of thinking, you come up with a bunch of ideas and present them at the shows, and then drop what doesn’t work. With the Westcomb Shift, it’s the other way around. You listen to what people want, and then you give it to them.”

ABOUT WESTCOMB: Westcomb (www.westcomb.com) creates innovative, stylish, performance-driven outerwear for men and women that is 100% made in North America and 100% committed to performance. Made to be worn in the most demanding conditions, Westcomb gear achieves a standard of excellence that is attainable only through the constant access and oversight provided by their industry leading commitment to local manufacturing. Conveying a true passion for the outdoor experience, Westcomb’s 2012-13 collection features strategically minimalist designs, blending essential features for active athletes with an international, athletic fit. Westcomb builds their unique performance apparel with a remarkable roster of industry leading supplier brands including Polartec NeoShell, eVent, Schoeller, Primaloft, Pertex, YKK, Mapp, Riri, and the world’s finest Hutterite goose down.