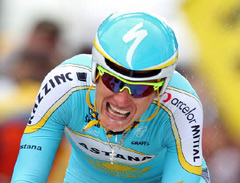 I’ve been pretty busy with other things this year, so I’ve been lucky to catch the highlights of the 2007 Tour de France. What I’ve seen has been awesome–Rasmussen dominating, Vino pulling out some gutsy stage wins–but that has all come to a screeching halt. Blood doping… performance-enhancing drugs… questionable trips to Italy, er, I mean, Mexico… no, Italy. I’m tired of cheaters and liars. I think I still remember my Mom telling me where cheaters and liars go, maybe my Mom should be the new spokesperson for professional cycling and all of professional sports?

It’s too bad because there isn’t a more exciting sporting event in the world than the Tour de France and now its reputation is so damaged that I question its longevity–unless the UCI, the individual teams and the sponsors require more of their athletes. These athletes are respected worldwide by millions of people–both young and old. But, if those millions of fans are anything like me, they are tired of all the scandals and outright cheating by the elite racers of the sport. Jan Ulrich, Ivan Basso, Michael Rasmussen, Floyd Landis, Alexander Vinokourov… the list goes on and on. These athletes are amazing. They train hard. They work their butts off, but for them to throw away their careers and their livelihood for the sake of one stage win, or one tour win is a complete disgrace.

So, my hope is that the UCI, the sponsors and team owners band together and speak out very, very harshly against illegal performance-enhancing drugs, doping, etc. and take that message to the world loud and clear. It’s time for athletes of all levels to finally take to heart my Mom’s words, it’s time for someone to campaign against cheaters and it’s time for professional cycling to get out of this vicious cycle. I’m done and I’m sure many other fans are too.So, my question to all cycling fans everywhere… who and what will save the sport?

In case you missed it, here’s the news:

Current leader and sure-bet to ride into Paris, Michael Rasmussen, fired from team for lying about his whereabouts in June – Velonews.com

The Man, Chris Horner Speaks Out: