The start of Stage 2 of this year’s Tour of Utah took place just down the road from our home, so naturally we hauled the family down to take part in the festivities. This year’s start was much-improved from previous stage starts for the Mt Nebo stage of the Tour of Utah. I liked the atmosphere better and the two-lap neutral parade route was great for spectators.

Before the gun went off, all the leaders and big names in the race were brought to the front for all of us to see. Big George Hincapie, young phenom Taylor Phinney, last year’s winner Francisco Mancebo Perez and the man who just last Saturday crushed the field in the Leadville 100, Levi Leipheimer were stacked at the starting line for photo ops. It was cool. 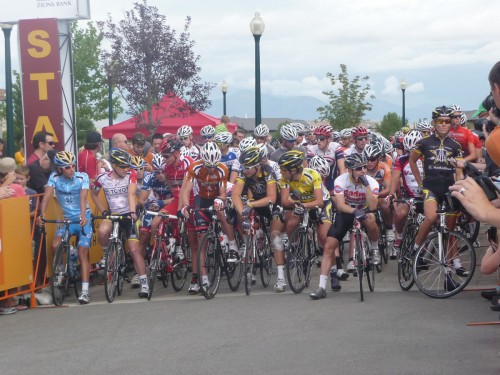 We all cheered and my oldest daughter clanged the cowbell as the racers lapped us twice and then headed South towards 11,928 ft. Mt Nebo. Following the race on Twitter, I got the news of George Hincapie’s crash and trip to the hospital (completely bummed for the man) and then followed as the climb progressed. Levi seemingly came out of nowhere to catch the lead group and then simply blow past everyone for a 0:51 victory over Francisco Mancebo Perez.

Great to have the Tour of Utah running strong again this year. I’m looking forward to seeing if Levi can continue his performance with the time trial, criterium and the agonizing Queen stage yet to come. Good luck!

The full race recap and results are below: 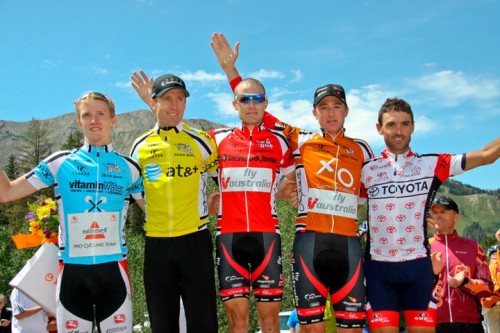 The day started on the doorstep of the stage sponsor XanGo’s world headquarters with a neutral roll out. As soon as the group hit the official start line riders were immediately trying to breakaway. At one point, the peloton was strung out in a long fast paceline. Eventually a group of about 16 riders managed to breakaway.

As the race wound its way through a small canyon, around mile 40, U.S. national road champion George Hincapie of BMC Racing Team and 15-time Tour de France finisher crashed and abandoned the race. He sustained abrasions to the right side of his head and shoulder and received 18 stitches to close a cut on his right knee.

Near the base of the foreboding 20-mile climb up cloud-covered Mount Nebo, the breakaway group was caught as they started their way uphill. Riders soon were dropped as the strong climbers made their way to the front.

Darren Lill of Fly V Australia made a move early on, wreaking havoc on the rest of the field. He pushed his lead to as much as 40 seconds before being caught by a group of four riders, which included former Tour of Utah Champion Francisco Mancebo of Canyon Bicycles, Levi Leipheimer of Mellow Johnny’s, Ian Boswell of BISSELL Pro Cycling Team and Philip Zajicek of Fly V Australia.

As this lead group neared the summit, Mancebo accelerated, which Leipheimer matched and eventually attacked Mancebo to breakaway for a solo win by 52 seconds. Leipheimer finished the 70-mile course with a time of 3 hours, 11 minutes and 43 seconds. Boswell finished third, and was assigned the same time as Mancebo. 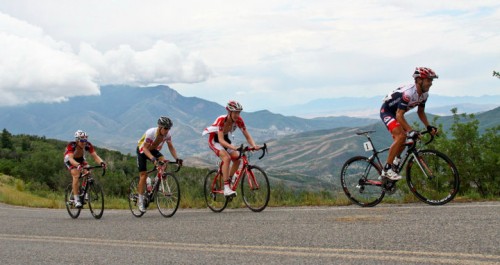 “I just tried to not go too far over my limit and keep it steady. I knew those behind were hurting and they weren’t working together well,” said Leipheimer. “I came here to win a stage and I saw the opportunity, so I took it”

Steve Miller, Tour of Utah president stated, “I think it is pretty conceivable that this might go down as the most exciting stage in America this year. Could we have scripted a better ending? Nature sure added to the drama and suspense of an already close race by rolling in those dark clouds over Nebo. It looked like it was going to open up a deluge any minute.”

The top five general classification riders were split between less than two minutes, Leipheimer ending with a total time of 6:40:36, Mancebo with 6:41:32, Boswell and Lill with 6:41:52 and Philip Zajicek of Fly V Australia with 6:42:10.

“I think Utah has fantastic roads, really tough climbs and it is the perfect place for a bike race.” continued Leipheimer. “I would really like to see the race grow in the next couple years. I think it would complement the new Tour of Colorado race very well and then together they can become the two August high-altitude big stage races that attract the worlds top riders. I think the Tour of Utah is doing well and growing, and that’s what’s important.”

Photos within release section are by Eric Schramm.