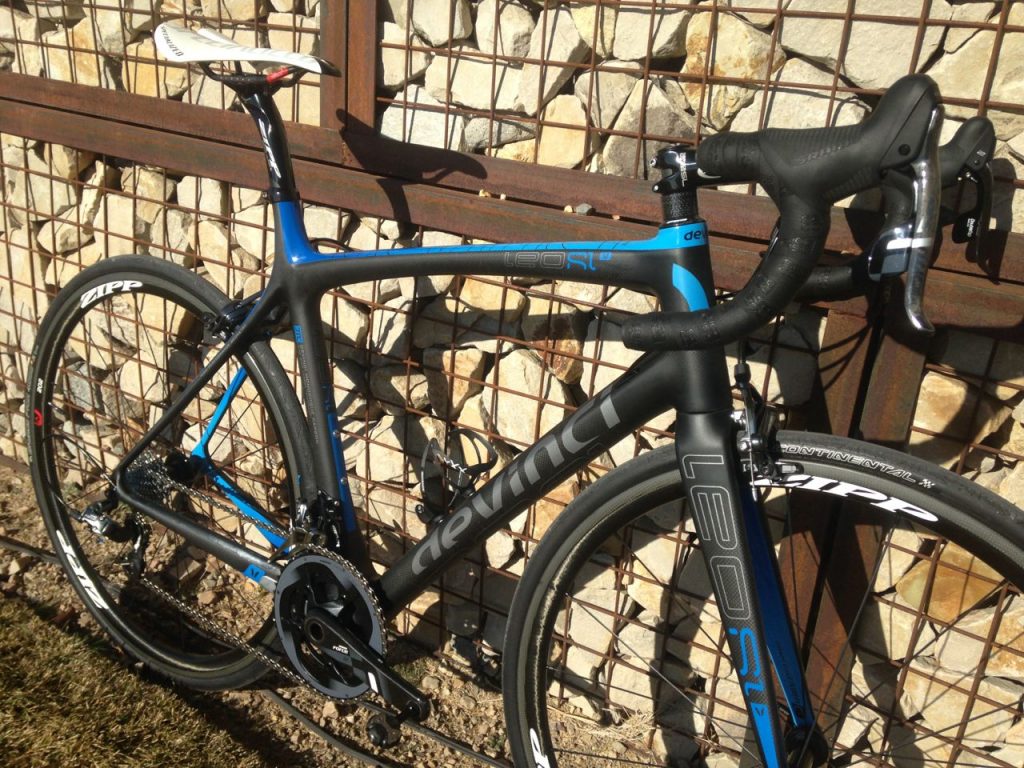 Renowned road and mountain bike racers have enjoyed loads of success aboard their Devinci’s in recent years. During the 2013 edition of The Tour of Utah, former Kenda-5 Hour Energy cyclist, Francisco “Paco” Mancebo, put the Devinci Leo SL on my radar. That final stage win was classic Mancebo and I’ve since been busy doing my best impersonation of the punchy Spanish climber aboard a custom-built Leo SL. I must say, it’s quite the all-round weapon.

Instead of having the luxury of building multiple, purpose-built bikes, Devinci has packed the capabilities of both a world tour racer and a gran fondo roller into a single frameset. Built with a smattering of features you’d expect from a top-of-the-line carbon road bike, the Leo SL comes with something that many of the others in the category do not: a full lifetime warranty.

While you’ll find lighter frames on the market, the Leo SL is built for the long-haul with a layup that balances light weight with durability. The folks at Devinci are confident in their bikes and want you to ride it for a long, long time.

To accomplish such a bomber frameset, Devinci utilizes a mixture of aerospace-grade carbon fiber in what they call DMC-R HR layup. Utilizing three different flavors of carbon fiber (Grafil HR40, Torayca T700 SC and M30 SC) this tour-worthy frame uses the highest-quality materials available. Dual Core Fusion technology also allows Devinci engineers to optimize the upper and lower halves of the frameset for maximum stiffness and compliance in the right locations. I will say that this is certainly one of the most beautiful frames I’ve seen and the craftsmanship is top-notch.

Going down the checklist of a modern frameset, the Leo SL checks off all the boxes. Devinci opted for a wide BB86 bottom bracket which serves as a stout pedaling platform. As is now standard, the head tube is tapered and the extended seat mast makes for a stiffer front triangle and increased standover.

The tube designs were not chosen for their aerodynamic qualities, but instead they were carefully designed to maximize ride quality. No single tube is straight, with each one built for optimal performance.

To be fair, 2014 Leo SL isn’t really new. It was introduced for the 2012 model year and has received only cosmetic facelifts since that time. The black/blue color scheme of the 2014 frameset is simple and elegant and delivers a fetching overall appearance to go with my chosen custom build kit. As a rolling mid-season release, Devinci has also introduced a disc brake version of the Leo SL (Leo SL Disc Ultegra Di2).

Highlights of the Custom Build:

Built up last November, ridden regularly throughout the winter and now into early spring, the Leo SL was impressive right out of the gate. Again, my custom build kit may not be the lightest possible on this bike, but at just over 15 lbs., this bike has everything I would ever want in a custom build.

Predictable and Comfortable in the Saddle

Every break in the weather I had, the Leo SL was the bike of choice. Throughout the winter, I was able to nab PR’s and keep myself in some of the best offseason shape in recent memory. This bike made it easy to want to get out as every ride was met with a consistent, predictable feel and balanced handling. While any bike review wouldn’t be complete without mentioning the lateral stiffness and vertical compliance, the Leo SL checks off both boxes with ease. Tops here is the stiffness as the large down tube, bottom bracket and asymmetrical chainstays all work in concert to propel you forward. Vertical compliance is good overall, but not best-in-class. I’d say the Specialized Tarmac has a smoother ride.

The ride did improve significantly midstream as I switched from the Zipp Service Course SL aluminum seatpost to a Bontrager XXX carbon seatpost. The difference was certainly dramatic indeed as my backside appreciated the added compliance without sacrificing in-the-saddle power. Devinci states that the extended seat mast adds to vertical compliance, but I’m not sure how that’s possible. Most bikes improve vertical compliance by employing a narrow diameter seatpost (like 25.4 diameter seatpost on the new Cannondale Synapse) and maximize the exposed area of the seatpost to allow the post itself to flex fore/aft. The result here is a ride that is stiff and responsive, but not overly harsh — especially with the carbon post.

In an effort to describe the ride character of the Leo SL, let me just sum it up as balanced. Under all conditions, I’ve felt like the bike naturally tracks well. On long climbs and on flats, it goes where it’s pointed. Particularly, when riding hands-free, this bike remains poised and pointed forward with minimal fuss.

While it is very balanced, it is also responsive to rider input. Steering — to me — is slightly quicker than the benchmark Tarmac SL4. All this means is that on a rare occasion I’ve noticed the front end in need of a more attentive pilot. Much of this has been as I’ve been tweaking the cockpit and hasn’t manifested itself after I’ve completed my final cockpit tweaking over the past month.

While most of my riding has been in cold weather, I’ve been quite surprised just how fast it is on the climbs. As mentioned, it feels very balanced and even more particularly on climbs of all sorts (short and punchy or long and gradual). Once in a nice cadence, climbing just happens. Seated or standing, this bike really transfers power to the wheels with the best bikes on the market. I particularly love standing up and cranking out the vert on this bike. The Leo SL loves to be pushed and is always a willing dance partner.

Even under the most extreme duress, the frame seems to respond. I’ve got compact gearing with 11-28t cassette, so it’s outfitted for even the steepest of ascents. When pitches get in the 15-20 degree range, just stand up and keep moving. I’ve set a few PR’s and have otherwise been in the ballpark on pretty much every other climb.

The ride quality continues at speed with predictable overall handling. Only rarely did I notice a little bit of front-end wander on high speed chatter. I’m talking speeds of 40 mph+ when the road conditions become less-than-ideal. It was in those instances that I noticed the stiffness of the chassis and its tendency to require a skilled pilot.

That said, when the roads change to twisty and turny, the Leo SL really shines. I love the handling of this bike and feel it suits the extended climbs and tight descents found on my typical routes. At speeds approaching 50 mph on smooth roads, the Leo SL remains solid and comfortable. Laying into hairpin and sweeping turns is a total blast.

I exclusively rode this bike with Continental Grand Prix 4000S 25c tires and felt that the extra girth really helped while descending. All that rubber made for excellent grip at speed and helped calm chip-and-seal descents. There is ample tire clearance with these tires, but Devinci says that 28c tires are not recommended as they can rub when pushed hard.

I’ll also mention here that I’ve had zero issues of toe overlap on slow-speed maneuvers, so turn around with confidence on that narrow bike path.

As the cockpit configuration has changed through the course of my tests, I’d have to give the nod to a more aggressive layout. My final Bontrager cockpit setup (20mm setback post, 110mm -7deg stem and bars with 85mm reach) made both descending and ascending even more fun and racy. My initial, less-aggressive Zipp alloy setup (20mm setback post, 100mm -5 deg stem and 70mm reach) was upright and comfortable, but didn’t bring out the bike’s killer instincts. If your body can handle an aggressive posture, you’ll unlock an even better riding experience. Either way, you’ll enjoy the ride of the Leo SL.

As with any bike, you may want to change out a few key components based on fit or personal preference. Whether you opt for an off-the-shelf Leo SL or go my route with a fully-custom steed, you’ll be stoked riding this beautiful bike for years to come (it does have a lifetime warranty). To protect the frame from cable rub, Devinci includes a package of sticky dots, which I’ve strategically employed.

A nice touch with the paint scheme is the mixed use of glossy paint and matte clear coat. On areas of higher abrasion (inside of seatstays, chainstays and inside of fork), the blue glossy accent color is used. This improves scratch resistance and makes for easier bike cleaning as dirt and grime just wipe clean from those surfaces with a wet rag. This frame is too beautiful NOT to keep looking as good as new for as long as possible.

As mentioned, I’ve gone from full-aluminum cockpit to full-carbon to isolate the characteristics of the frame. While your experience may vary, I’ve done my best to vary up about every critical component to provide the most well-rounded review. Having carbon bits throughout has methodically improved the feel of this bike at every step.

The Leo SL won me over right out of the box and every mile since has been a ton of fun. The blue/black color scheme is drop-dead sexy and the performance has been equally delicious. This is a great all-rounder that is right at home here in Utah’s Wasatch Mountains. You’ll have to hunt a little to find one locally, but if you want something unique and capable, it will be worth the effort.