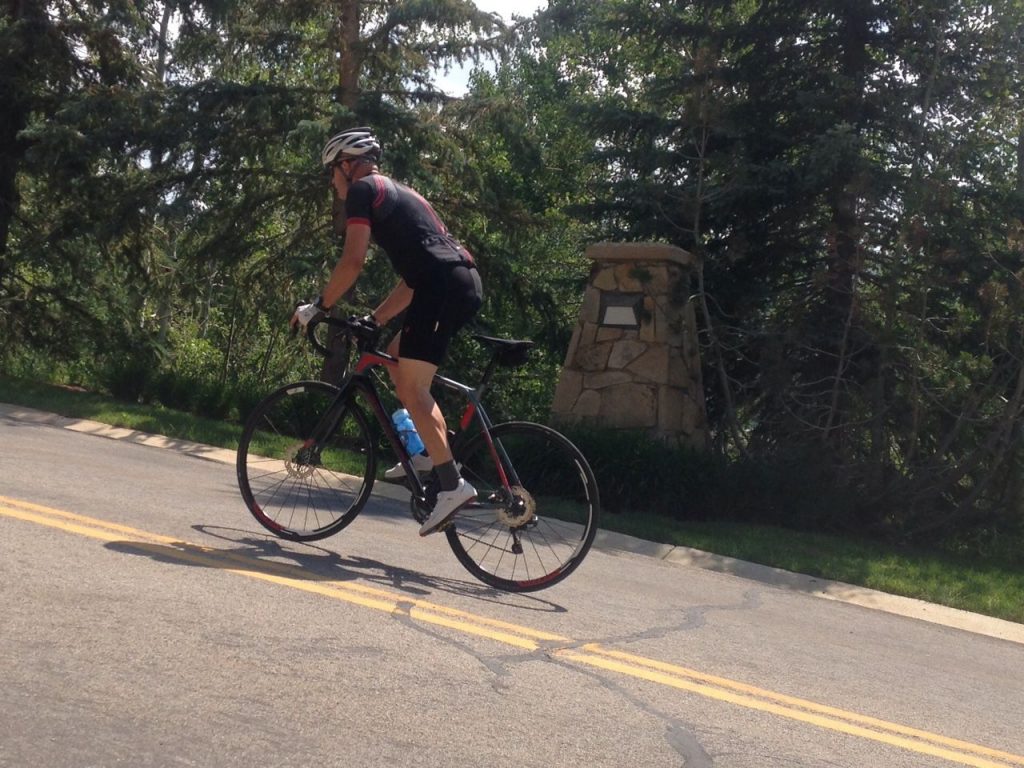 While at ScottWeek, I was able to spend some quality time on the 2015 Scott Solace 15 Disc in Utah’s mountains. Scott’s first disc-equipped road bike proves impressive and their choice of thru-axles hopefully sets some standards for others to follow. 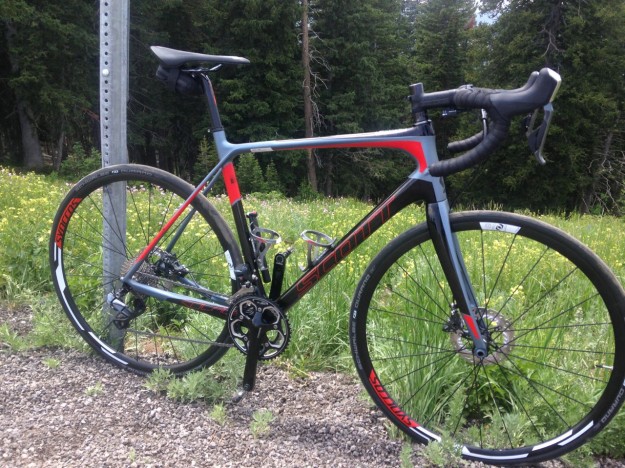 At ScottWeek, it was made apparent that the 2015 Scott range is really one of refinement. That’s not to say that there aren’t any new models (Big Ed Fatbike and Gambler DH bike are both new), but the focus has been on tweaking and optimizing the current range. Once such optimization is the endurance-focused Solace that will now be available with disc brakes.

Road discs are still the Wild Wild West with standards aplenty, the ongoing SRAM HydroR recovery and the perennial debate as to when discs will be allowed into the pro peloton. While the pros riding discs is really inevitable, Scott is ignoring the status quo and is going full 15mm thru-axle front and 142x12mm rear and appears to have unofficially adopted Shimano’s new flat-mount disc brake on the rear chainstay.

While we’re long from a “standard”, these are at least readily-available axle sizes that have been well-proven and are the current winners for mountain bikes. The easily-tightened RWS thru axles are great for everyone not named Nibali or Sagan.

The test bike I rode was off-spec in that it was equipped with the tanky and toy-ish (I’m not a fan of electronic shifting) Shimano Ultegra Di2. Production models will feature Ultegra mechanical with hydraulic discs — lighter and more practical. I didn’t have a scale, but I was told that my 56cm test bike was about 18.5 lbs (as equipped), The production model should be about a pound lighter. 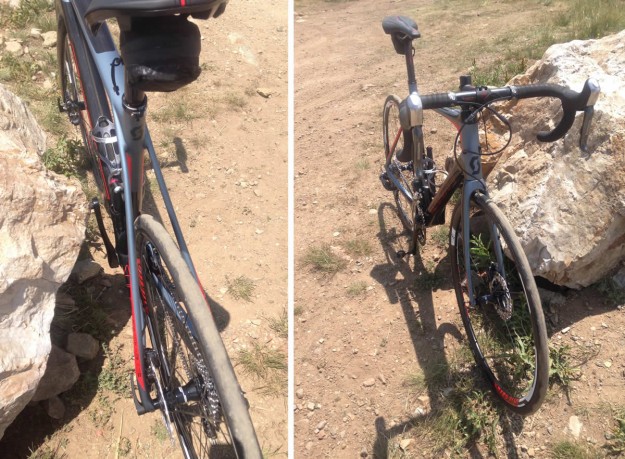 In Search of Rough Roads, Climbs and Winding Descents

I took a quick ride on the Solace at last year’s ScottWeek and was really left with mixed feelings — in part because I didn’t take the extra time to dial in the cockpit. This time, I took that extra time and dialed it in. The results were much improved with a comfortable and responsive feel. I rather like the taller head tube (185 mm on my 56cm), which allowed me to drop the stem further than I would on a race geometry frame. I could even “slam” the stem and maintain my preferred fit while achieving a more pro look, if I wanted.

The Solace follows the current crop of endurance bikes with a stout lower chassis (Power Zone) that’s matched to compliant seat stays, seat tube and fork (Comfort Zone). To achieve this, they don’t use any gimmicks or gizmos, just properly-tuned carbon fiber with just the right amount of flex or stiffness.

It didn’t take long to test out the comfort of the Solace platform as I found some recently-grooved pavement around Deer Valley’s Silver Lake Lodge that was prepped for re-paving. That grooved pavement offered an excellent test bed for the chatter-reducing qualities of the Solace. I ramped up to speed and powered through what would typically be a pretty jarring ride. The Solace didn’t make it completely disappear, but it most certainly dulled them quite handily. It’s definitely a smooth ride — I’d go on to test this further on my way up Guardsman Pass.

After that quick lap around the lodge, I stopped to spot-check the cockpit and reached back to test the seat stay flex — just for kicks and giggles. Without a brake boss, the stays are easily flexed inward about a centimeter. With disc brakes (or the standard direct-mounted brakes), the thin stays are left to serve as shock absorbers, if you will.

The cockpit checked out OK, so I was off to climb Empire Pass and then onto Guardsman Pass. These stout climbs feature several sections with inclines of 15% or more. And, the climb up Guardsman Pass serves up some of the worst “pavement” that I’ve ever ridden. I say “pavement” loosely because it’s just a rough coat of asphalt atop road base. At full-tilt uphill, I’m barely hitting 6-7 mph and the pro racers that hit this ascent during The Tour of Utah are only hitting 10-11 mph — it’s steep and rough.

Honestly, the climbing abilities of the Solace are excellent. As mentioned, I was able to get into a comfortable riding position and really felt the benefits of both the Power and Comfort Zones on the way up. But, I also felt the extra weight. There’s no way around the fact that this bike (as tested) was a little on the heavy side. It tipped the scales in at 5+ lbs more than the Addict SL I’m riding. As a result of the weight penalty, I did end up climbing a little slower than my previous rides here.

In spite of the extra weight, I was able to power through in the saddle and sprint out of the saddle, when needed. Under both conditions, I found the bike to feel right at home and beg for more vert. It feels balanced and climbs straight and smooth without feeling wonky. 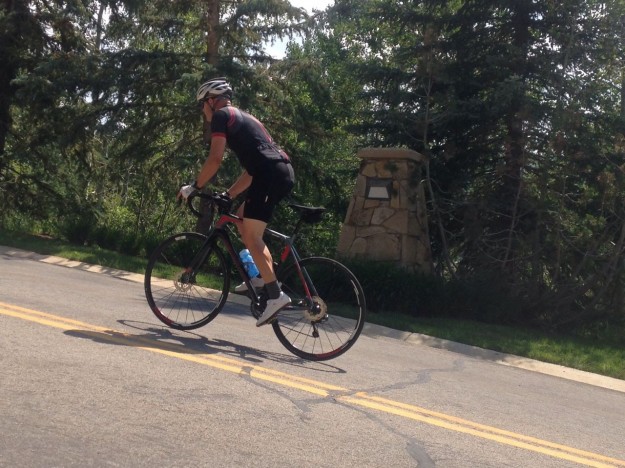 At the top, I was a little fearful of just how rough the descent would be. With almost 2 miles of steep descending on what I’ll barely call “pavement,” I was very grateful to have those shiny disc rotors instead of caliper brakes. Let’s just say that I endured the descent and the Solace made it much more “endure-able.” The brakes easily kept speed in check and the bike felt super-planted — even though my head felt completely scrambled by the time I arrived at the smoother pavement towards Empire Pass — phew!

As the descent became smoother and more curvy, I was able to lay into the corners and descend with confidence. The Shimano hydraulic disc brakes offered excellent modulation and stopping power from either the hoods or the drops. I liked being able to shed speed in a jiffy and look forward to riding more disc-equipped bikes with broken-in brakes (I christened this bike, so braking should get better once broken-in).

One of the concerns with discs is pad rub. Inevitably, the rotors will get tweaked or the pads will get out of alignment somehow. During my ride time, I did have some pad rub, but after a few lever cycles, the rubbing would typically disappear. It seems as if the pads sort of “self-align” without adjustment.

This bike will shine in wet conditions and rough roads for cyclists who want to cut to the chase and leave quick-releases behind. Personally, I hope Scott’s chosen standard proves to be the winning recipe, but only time will tell.

Update (7/5/16): We spent several months aboard the 2016 Scott Solace Premium Disc, so you should check that out.

Yes, this is just a quick ride review, but that’s all it took to really appreciate the new 2015 Solace 15 Disc. The power and modulation of discs was refreshing and the Solace does a great job at reducing road chatter. The cockpit is easily dialed in for casual or experienced cyclists — I hope Scott has chosen the winning axle recipe here.