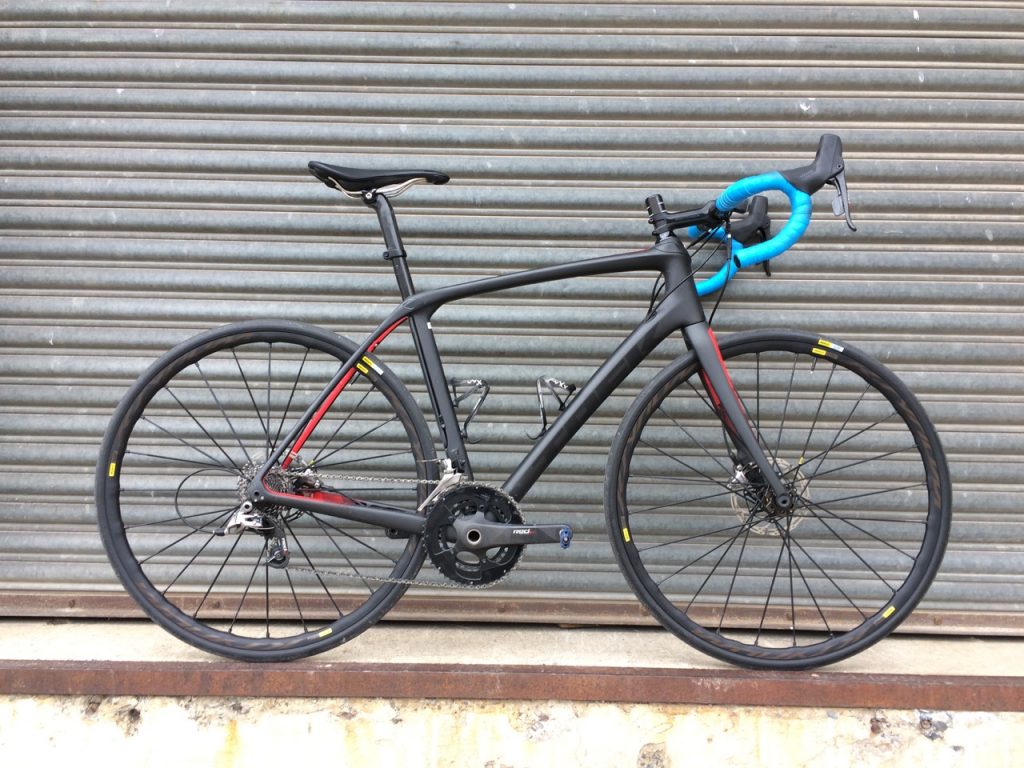 When it’s Spring Classics season, the WorldTour turns to equipment that can handle the extra abuse. Certainly, wider tires are in order, but many teams turn to another bike in their quiver as well. For Trek-Segafredo, that bike is the new Domane SLR. In 2016, Fabian Cancellara rode the new Trek Domane SLR to the top of the podium at the “World Gravel Championships” otherwise known as Strade Bianche. Now, we can all ride the new Domane SLR in both rim and disc brake variants. I’ve been on the SLR Disc for over half a year and I’ll confess, it is one smooth operator.

Having briefly ridden the previous Domane, I knew heading into this that the Domane SLR Disc would be a different breed. While the first-generation model was comfortable, it lacked spunk and character. The SLR aims to change that by not only providing an even smoother ride, but by making things racier and more playful at the same time. Those characteristics can be difficult to combine, but this concoction is working well for Trek.

The Domane SLR is the bike that most cyclists should be riding. It’s fast, it’s fun, it features a friendly geometry and it’s wicked-smooth. I’ve ridden a handful of great endurance bikes, but the SLR has the unfair advantage of essentially being a full-suspension road bike.

That “suspension” is what Trek calls IsoSpeed. In the rear it’s an adjustable IsoSpeed decoupler and in the head tube, it’s a fixed-position IsoSpeed decoupler. These two systems work together to deliver smoothness in all conditions.

Looking at the geometry, the Domane SLR does have a bit longer wheelbase and also a touch longer chain stays (420mm) than the competition. For the most part, you’d never notice but it does explain some of the minor nuances I’ve found throughout my testing.

With the adjustable rear IsoSpeed decoupler, I did a back-to-back identical circuit ride (descending, climbing, flats and gravel) in the stiffest and softest modes and here’s a summary of how it turned out.

Ultimately, it’s player’s choice here and it’s certainly easy to swap settings. I suspect most people will find a setting they like and leave it there as I did. To change it, requires an Allen key and a torque wrench. Simple undo the uppermost bottle cage bolt on the seatstay and slide the adjustment up or down. The Domane includes a torque wrench to cinch it down properly, but I’d suggest picking up something like the Park Tool adjustable torque wrench.

In the fall of 2015, I suffered a severe back injury while racing cyclocross. The resulting disc herniation has taken well over a year to heal and may never be the same. Needless-to-say, that may very well be my last cyclocross race, but thanks to the Domane SLR, I can keep riding quite comfortably.

From the outset, I knew that the SLR would be something special. I also knew that many other cyclists endure back pain to be able to continue riding. So, for those of us who have or have had back injuries, the Domane should be the bike of choice. That said, don’t peg it as a gentlemen’s cruiser bike because it can respond when pushed.

All around the Wasatch

Like all my test bikes, the Domane SLR Disc was hauled up and around every major climb in the area and ridden long and hard. While the Domane isn’t as responsive as the Pinarello Dogma F8, it’s no slouch. And, while it may not climb quite as well as a Cannondale SuperSix, it remains very efficient.

My custom build hits the scales at exactly 16 lbs., which is quite good (in spite of IsoSpeed and such) and on par with the lightest disc brake bikes on the market. A lighter set of carbon clinchers could help drop the weight into the mid-15 lb. range and would likely liven things up a bit more, but a quality set of alloy clinchers will suit the Domane just fine.

My ride menu always consists of climbing and, of course, subsequent descending. But, for this bike, I also threw in a bit of gravel for good measure. During my test period, I paired the Domane with both a set of Easton EA90 SL’s with Zipp Tangente Course 25c tires and Mavic Ksyrium Pro Disc Allroad wheels with 28c Mavic Yksion tires. Both are modern tubeless wheelsets that were well-suited for this bike. That said, I think my ultimate setup would be the Bontrager Aeolus 3’s.

My custom build consisted of a full SRAM Red HRD kit, which is about as light as you can get as far as disc brakes go. And, I did have it set up with the new Bontrager Pro IsoCore VR-CF bars, which are the perfect match for this bike in terms of comfort and performance.

For my initial rides, I kept the IsoSpeed in its factory setting — about 2 inches from the bottom. I was impressed by how chip-seal disappeared and potholes felt less pothole-ish. Then, after some head-to-head tests, I ended up settling on the lowest (softest) setting because that extra dose of smoothness comes with no significant penalty, so why not?

As far as climbing goes, the Domane does quite well. Again, it’s not a svelte climbing bike and the IsoSpeed decoupler does flex ever-so-slightly with every pedal stroke. But, the stiff chassis efficiently takes every pedal stroke and transfers it to the wheels. I have found that the front end does wander a smidge on climbs, but it’s much better than the original Domane and nothing to be concerned over. Just give it a little more gas and it straightens right out.

One of the best improvements over the previous-generation Domane is how nice it feels while climbing out of the saddle. The previous model got all wonky when rocking side-to-side on steep ascents, but the SLR does none of that.

Most people will buy the Domane for all-day comfort and supreme descending confidence and they won’t be disappointed. There is no fazing this bike at all. It corners admirably and responds well for an endurance bike. Nobody’s going to describe the handling as razor-sharp or crit-worthy, but it’s quite predictable and smooth at all speeds and over the roughest of pavement

Disc brakes deliver increased tire clearance (up to 32c), but I was only able to test it with 28c tires. At that width, gravel riding was still fantastic, but I imagine it would be even better with wider rubber. That said, I never shied away from a good gravel sector and found the IsoSpeed platform to shine.

The Domane SLR Disc is sitting atop the current crop of endurance road bikes. What sets this one apart is just how fast and responsive it remains. Both IsoSpeed decouplers deliver suspension-like performance with zero weight penalty in an confidence-inspiring package.

Without question, the all-new Trek Domane SLR Disc frameset knocked it out of the park. As far as endurance platforms go, there's no touching the Domane's overall smooth ride and confident handling. I could personally go for a touch sharper handling, but most riders will love every bit of how it performs.