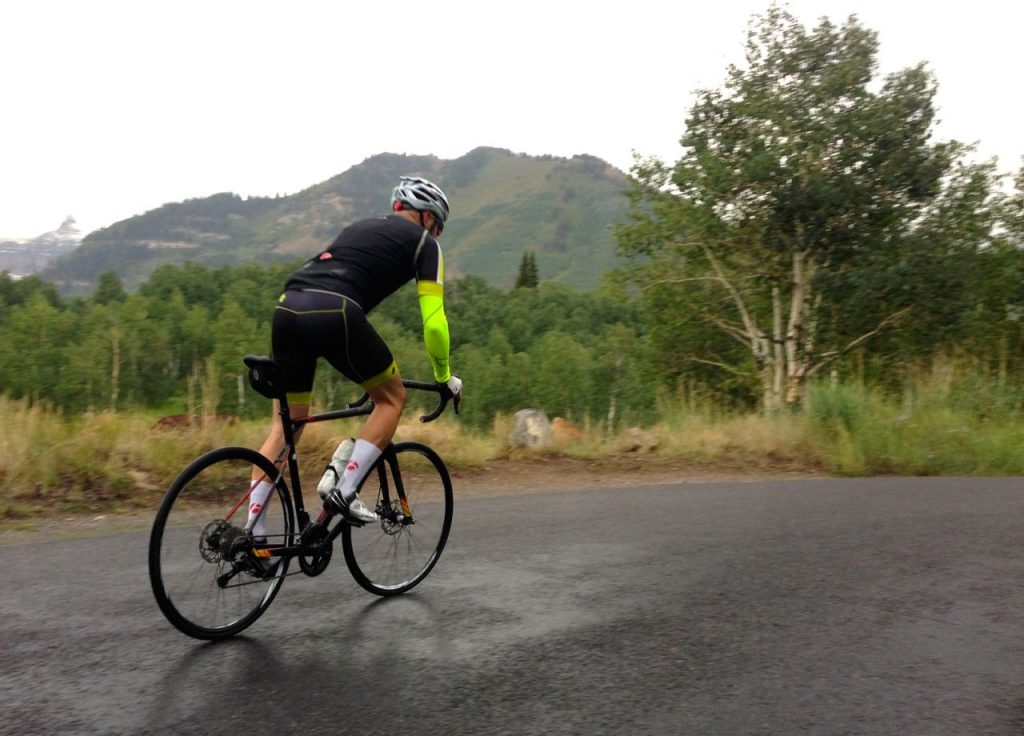 BMC’s road bikes are often heralded as the best in the business. With Swiss precision, every BMC is meticulously designed to deliver superb performance. While the GF02 Disc is not intended to have the same performance as their tour-winning superbikes, it stakes a claim at a level of versatility that makes it an easy fan favorite. 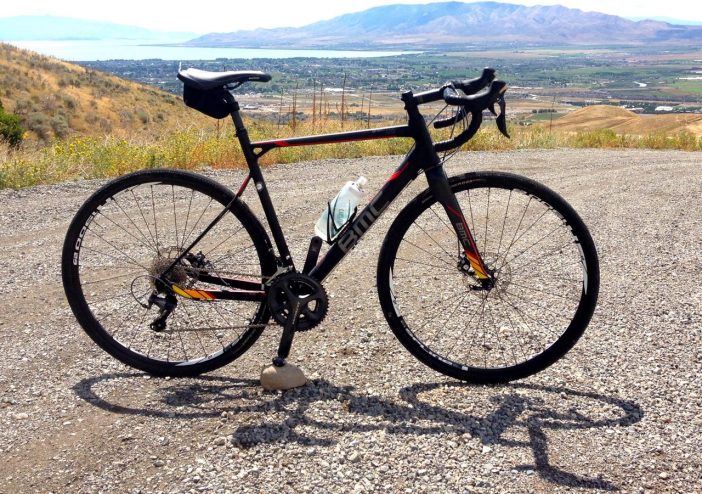 Tackling all roads with the GF02 Disc

With a penchant for all types of roads and conditions, the BMC GF02 Disc Ultegra is one handy bike to have on-hand when you never know what kind of adventures are in store. Everything from a rainy commute to a winding mountain road that turns to gravel and dirt or even singletrack can all be tackled with this bike.

During the course of testing, I tried to push the limits of the GF02 and was pleasantly surprised with how well it performed. No, it’s not a world-class road racer or a world cup cyclocross bike, but I’m not a world-class rider, so I really appreciated everything this bike brought to the party.

Initially, I rode the bike with the stock tires (35mm Continental Cyclocross Speed) and set out for miles of mixed road and gravel. These tires offer excellent on-road performance and roll better than expected on pavement. I then swapped out the gravel-friendly Conti’s for a pair of 25mm Continental Grand Prix 4000s’s and tried to push this bike hard on the road.

Ascending at any speed is easy — thanks to the widest gear ratio known to man. Frankly, I rarely used the biggest three cogs in the rear — even on the steepest of climbs. But, when I did hit a really steep pitch, that extra leverage was awesome. What surprised me, however, was the front-end’s tendency to lift off the ground on 20-25% pitches. This was likely due to the fact that I’ve never remained seated under such climbs before, but could do so with this drivetrain. 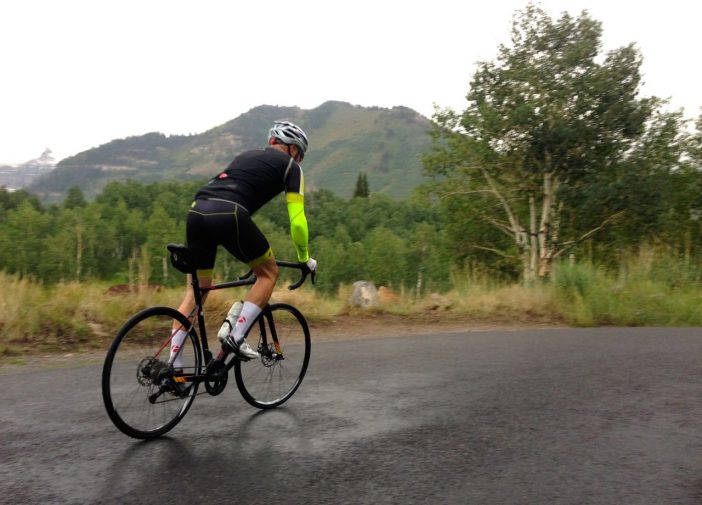 In road mode, the GF02 Disc performs admirably. Pushed hard on the pavement, the nature of the aluminum frame comes out. Surprisingly, BMC says it features the same amount of compliance as their carbon frames. While I couldn’t test that claim in a lab, there’s no getting around the fact that this is still an aluminum frame. As such, it transmits significantly more road chatter than a carbon frame does. That said, I was pleasantly surprised with its road manners — it’s not as harsh as you’d think.

Something else of note is that while the frame is ultra-stiff at the bottom bracket (these tubes are HUGE), that doesn’t translate as much to a zippy ride quality as it does on a carbon frame. The frame responds well when pushed, but you just don’t get that same zing you would get out of a carbon frame.

So, yes… it is an aluminum frame. And yes, it is one of the best-riding aluminum frames I’ve ridden, but no, it doesn’t ride as smooth or zippy as a carbon frame.

While pounding out hundreds of miles and thousands of feet of vert, much of the aforementioned characteristics tend to disappear and the GF02 simply turns into a predictable endurance bike. I have pushed this bike very hard on the road and have notched some top 5 Strava segments and even some PR’s on some of my regular routes. This reminds me that fitness and gear ratios can have a bigger influence on your performance than having an ultralight bike. You can get a great bike for under $4000 and still compete — and that’s what I’ve done on the GF02. 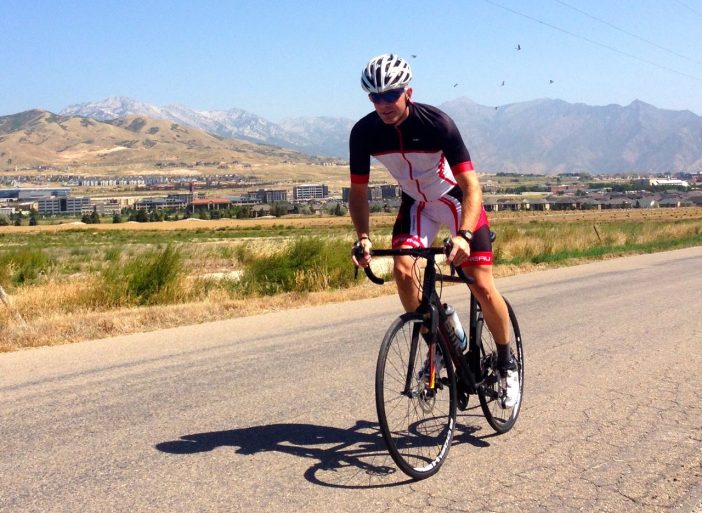 Since I’ve pushed this bike up some of the best climbs in the area, I’ve also ridden it down some fast and curvy descents. Once up to speed on the descents, this bike happily rides like a barge — and I’m good with that. It is unflappable and inspires an immense amount of confidence and that’s something that many riders will appreciate — particularly on long descents and especially on gravel roads. While you won’t be winning any tight slalom races, it does respond well to input and can navigate curvy roads.

The mechanical disc brakes add to the confidence as the all-weather performance has been fantastic. I’ve ridden in pouring rain on several rides and was really stoked to have predictable stopping power — not something I’ve been used to with carbon clinchers, like the Zipp 202’s.

Overall modulation has been great for cable-actuated discs. I’ve loved the lever feel and stopping power. Adjusting the brakes does require tools and squeezing a multi-tool between the spokes to do a pad adjustment is not the easiest, but possible when necessary. I didn’t notice much in the way of brake fade on long descents — likely due, in part, to the larger 160mm rotors at both ends. 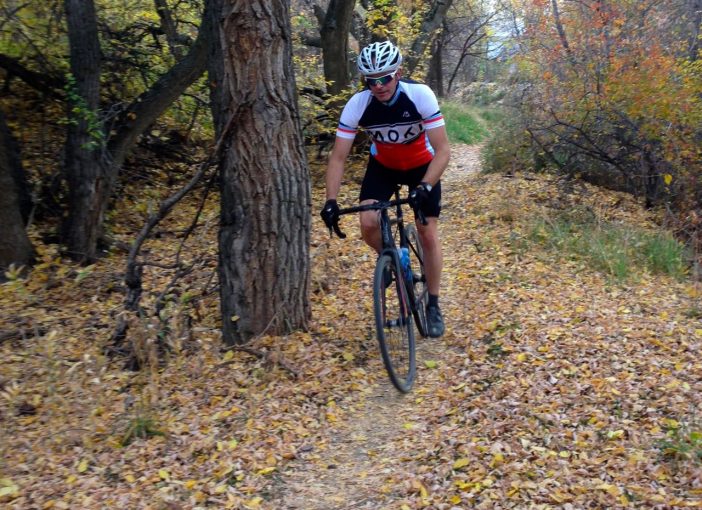 It’s hard to be too critical of such a versatile bike. Again, I’ve got better dedicated bikes, but the GF02 Disc really is a blast doing what it’s built to do. My dirt and gravel time was split between the stock wheels and tires and a set of Bontrager Affinity Elite wheels with Bontrager CX3 32mm knobbies.

Most certainly, the stock tires rolled faster, but were less capable on dirt and gravel. I enjoyed the added comfort provided by the tubeless Bontrager wheelset as I’ve explored the local singletrack. The GF02 is really fun to whip around the local singletrack — especially as a mid-ride diversion. Mixed nuts (road, gravel and singletrack) rides were some of my favorites with either set of knobbies. I was never in a hurry on the road, but simply loved mixing things up. 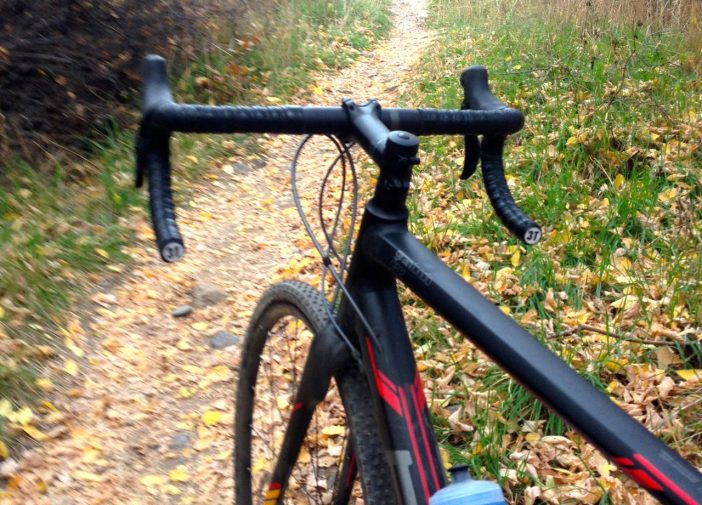 Yes, the GF02 Disc is versatile. Versatile enough to enter and compete in local cyclocross races. For racing, I did swap out the wheelset for the Bontrager Affinity Elite and CX3 32mm tubeless tires. The tubeless setup was key to success on the rocky course that I raced on. Overall handling was superb in tight, twisty terrain and the disc brakes were essential to keep from slamming into other riders heading into jammed-up ascents. Near the end of the flight, the only negative I noticed was my lower back started aching. Carbon might have taken the sting out of the rough terrain at high speed.

I’ll say that the full Shimano Ultegra drivetrain has been impressive. Shifting has been predictable and accurate. And, Shimano’s style of shifting is a bit easier to engage while on bumpy singletrack. If you’re a Shimano fan, their latest second-tier mechanical groupset won’t disappoint.

About the only major whiff I’m seeing with the GF02 are the drop bars. The narrow, round tops offer no respite from ever-present road chatter. And, the bars themselves don’t flex one iota — great for responsiveness, but not so great for long-distance comfort. Every crack in the pavement can be felt all the way to your cranium. A set of bars with flat tops and perhaps more squishy bar tape would go a long way. I like that they went with wider, 44cm bars, but that’s little salvo for these overly-stiff handlebars.

The carbon Compliancefork does knock off some road noise, but it all goes by the wayside with the aforementioned stiff cockpit. Additionally, the beefy fork surprisingly exhibits a bit of lateral flex during standing climbs. I could easily make the disc rotor rub when pushed hard — perhaps thru-axles would remedy that flaw?

Taken as the bike it’s intended to be, the GF02 Disc is one versatile player. It’s not best-in-class at any one discipline, but the fact that it can tackle road, gravel, singletrack and cyclocross makes it a great bike to have around.