Yeah, you’ve seen the scorpion around. The last time it reared it’s ugly head was on the leg of another rider hauling past you on a brutal climb. That little red Castelli scorpion has been your nemesis–etched into your brain the day you bonked and the scorpion kept on rolling.

The scorpion is making amends this Fall by introducing a stellar new 3-season cycling jacket that’s perfect for the upcoming winter riding season. The new Castelli Insolito Radiation Jacket offers an all-in-one jacket with a built-in layering system to keep you warm and comfortable throughout a variety of fall, winter and spring riding conditions.

The secret is the ultra-thin Radiation liner that traps the heat in while still letting perspiration out–a key element to a comfortable winter riding jacket. Though Castelli clothing is targeted at road cyclists, both road and mountain bikers can appreciate the warmth and comfort the Insolito provides. 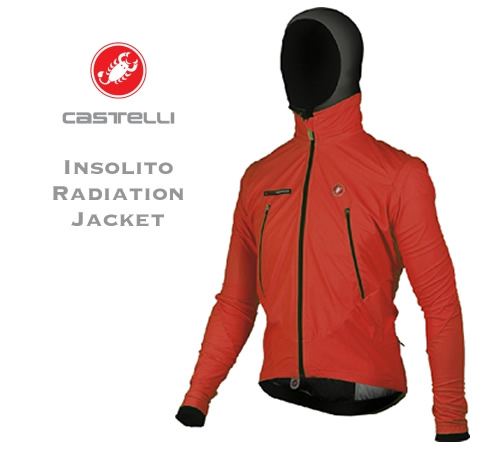 With an MSRP of $500, the jacket isn’t so budget-friendly, but when it comes to all-season comfort, no price is too high.  And, with the scorpion on your side, you just might return the favor the next time your feeling strong up that hill climb you bonked on.

Drawing on the immutable Laws of Thermodynamics, Castelli clothing designers have developed a ground-breaking fabric technology that takes advantage of the way the body creates, saves and loses heat.  Called Radiation, the technology utilizes an ultra-thin, reflective material that maintains body heat without resorting to bulky layers of insulating material, such as fleece.

Castelli Radiation is unique to cycling (as well as to the entire outdoor recreation industry), explained Castelli Brand Manager Steve Smith, who led development of the technology. Radiation was such an advance it forced Castelli to re-think the way a jacket was constructed.  Castelli is debuting the technology here at Interbike in the Insolito Radiation Jacket (MSRP $500) that features a removable Radiation liner (Radiation Vest, MSRP $120) – creating a unique, an all-in-one, 3-season jacket.

“Until now, the cycling industry has ignored heat loss through radiation, instead relying on bulky fleece to protect against conductive heat loss,” Smith explained. “No products have employed the concept of radiation to protect against heat loss.  Until Castelli. Oftentimes, the most revolutionary inventions seem the most obvious in retrospect.  Such is the case with Radiation technology.”

The upshot is a fabric that is extremely thin (measured in microns), captures and reflects body heat, and is perforated for breathability.  Early on Castelli designers decided that a Radiation liner would be the foundation of a modular jacket design that would be versatile enough for fall, winter and spring cycling.

“It might not make business sense to market an all-in-one, year-round racket, but that’s what we’re doing,” said Castelli US President Greg Cowan.  “With the introduction of Radiation, we have made a strong statement about Castelli innovation and performance, designing the best winter apparel possible.”

The body radiates heat, much like radiators in a home heating system.  Moreover, that heat escapes from the body in five ways: radiation, evaporation, convection, conduction, and respiration.  To protect against this kind of heat loss, Castelli laminated a light woven substrate to a perforated space-blanket film.  This film reflects back 80 percent of the body’s heat in a super-efficient, super-lightweight manner, and with a
thickness measured in microns.

Cycling jackets are always tricky.  Since perspiration is involved, a balance must be maintained between breathability and protection.  For the Radiation shell, we used highly stretchable Windstopper® X-Lite™ fabric, which is up to 10 times more breathable than our competitor’s windproof fabrics.  A body loses up to three liters of sweat an hour.  Sweat bogs a rider down, and non-evaporated sweat will make one extremely cold – so getting rid of sweat is a top priority.

As with all Castelli products, the Radiation collection is the lightest in its class.  Simply put, we replaced the bulk necessary in other cold weather jackets with a revolutionary alternative to give the rider the ultimate riding jacket.

This revolutionary heat reflecting insulation system is so thin it doesn’t need to be laminated to the outer windproof layer.  By making it removable, Castelli was able to make a jacket that can be used in cold conditions with its liner and in mild conditions with the liner removed.

Temperatures and applications include:

The arms are anatomically cut and don’t hang or restrict movement when stretched out on the bars. The light stretch of the Windstopper fabric moves naturally with your body and doesn’t restrict movement.

Fleecy under-helmet hood: The fleece-lined under helmet hood wicks unwanted moisture away
very effectively and is easy to zip-off.

Chest vents: Reflective mesh lined vent zips lie to the side of the chest and are easy to open and close while riding for changing ventilation needs.

Main zip: The main zip features a zip garage at the top to prevent the zipper from rubbing against the neck.

Sleeves: The Insolito Radiation Jacket features sleeves that are easy to unzip even while riding and to put away in the side pockets, creating a great mild weather riding top. Partially unzipping them works as effective venting too, giving this jacket the widest operating range of any available.