With the popularity of POV cameras and the recent addition of rear-facing cameras into the professional peloton, it was only a matter of time before they entered into the lives of everyday cyclists. But, the combination of a tail light and HD camera is the ingenious concoction of the folks at Cycliq and they call it the Fly6.

See (Behind) and Be Seen

Last fall, I had the opportunity to meet the co-creators of the Fly6 — Andrew Hagen and Kingsley Fiegert. They are two Australian cyclists and entrepreneurs who have a ton of passion for this device. Their Kickstarter success with the Fly6 has actually carried them successfully into their next project, which is the Fly12 front-facing light/camera combo. Before I get ahead of myself, let’s stick with the Fly6.

Out of the box, the Fly6 comes equipped for mounting just about anywhere, but the most common will likely be on the back of the seatpost. Since the version 2 unit is significantly smaller, getting the unit installed at the seatpost collar still yields enough space for a typical saddle bag, as you can see. 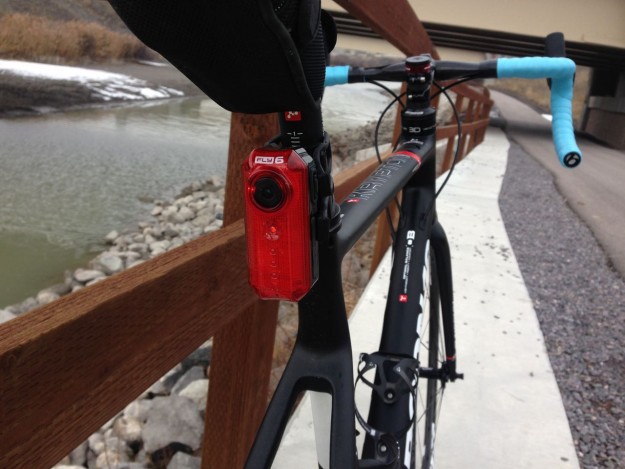 With a combination of shims and straps, there’s likely no incompatible bike on the market. And, it doesn’t look too bulky on the bike — I think it looks pretty cool. Overall, it’s well thought out with little details such as the microphone being placed on the back of the unit, just below the mount so it’s not taking on a constant stream of wind (thus causing completely unusable audio). As far as audio goes, you do get a consistent chatter of road vibrations and clunking gears as you shift. Conversations are captured surprisingly well.

It features three flavors of rear light action from utterly obnoxious (in a good way and great for daylight) to pretty mellow. Obviously, the more intense the flashing lights, the shorter the battery will last. But, bright and obnoxious is what I always opted for — no matter the conditions.

I have also tested the weather resistance with several wet and cold rides — the thing is pretty much impervious to the elements.

During the course of my testing, I’ve been pleased to see the driving habits of most drivers with most of them being very courteous and giving extra space. Most of the time the footage is rather boring, but on occasion, it’s come in handy.

One such time was trying to figure out how the heck some dude on a Bianchi was able to blow by me. When he did, I thought to myself, “that’s strange.” When I saw what happened, I realized that he didn’t stop at the 4-way, but instead shot the gap, so while I was winding up from a complete stop, he zipped on by and maintained his gap until we went different directions — cheater.

The Fly6 chunks up the footage into approximate 10 min increments, so you have to check each file to find a ride section and then scan through to get to the point of interest. Below is a 10 min segment from one of my usual lunch routes.

The video footage is actually pretty good and usable, but there’s just not a whole lot going on behind me of interest — thankfully. I do think about potentially putting a sign on back saying, “Smile, you’re on camera” or something like that. But since the majority of drivers tend to be courteous where I ride, there’s no need to be obnoxious.

As far as usability of the actual footage, that’s where there’s a bit of rub. On a Mac, having a bunch of .AVI files is not so user-friendly. I have chosen to either use Handbrake to convert to .m4v or directly uploading the .AVI to YouTube. The two-step process is a bit of a pain — it would sure be nice to have the file format be more universal, like .m4v.

And, it’s a good thing that the Fly6 comes with several extra rubber straps because I’ve broken two of them so far.

The Fly6 adds a new element of fun and safety to every bike ride. I like having it on as extra peace of mind and the obnoxious flashing mode is perfect to be seen.