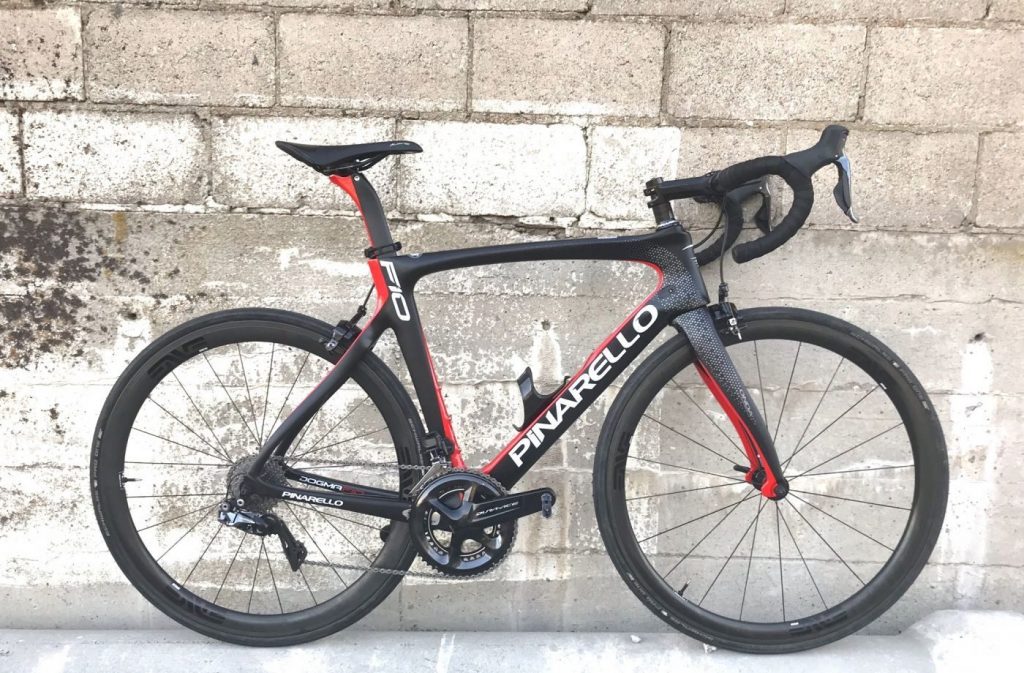 Without question, the most loved and hated bike in the pro peloton is the Pinarello Dogma F10. It’s not just about the look of it (though Pinarello’s have been know to have polarizing designs), but Team Sky has their haters. Regardless of how you feel about Team Sky and Pinarello’s designs, there is absolutely no question in my mind that the Pinarello Dogma F10 is the premier bike on the market today — hands down.

Italian dreams are made of Pinarello Dogma F10’s

Wake me up when I’m done dreaming because the Pinarello Dogma F10 has me in a dream-like state. Honestly though, one ride aboard the F10 and I was hooked, wishing I was 15 years younger with the VO2 max of Geraint Thomas. I rode and loved the Dogma F8, but the F10 takes the tour-winning F8 to a “other-worldly” state.

Alright, let’s take a step back and set the stage here. This particular F10 was custom-built for me by the good folks at CompetitiveCyclist. As with all customers, I was able to reach out to a Gearhead via live chat and then email — asking questions, confirming sizing, selecting build and sending off fit details. Unlike most customers, I was able to pick it up at Backcountry.com HQ, fully-built and ready-to-ride. While there, I got a tour of their facilities and can assure you that they spend tons of time geeking out with every build to make sure it rides and performs like their own bike. It then arrives in a box with minimal assembly required. A few tools and 30 minutes and you should be golden.

With any good Pinarello Dogma F10 build, this one was hand-picked with Shimano Dura-Ace R9150 Di2, ENVE SES 3.4 carbon clinchers and PRO Vibe stem and carbon bars. I’ve been running the Schwalbe Pro One 25mm tires set up tubeless from the start with typical tire pressures of 80 psi front and 85 psi rear (admittedly, it did make for a smoother ride). They actually measure out to 28mm on the button.

My only departure from the build provided was to swap the stem for the PRO Vibe with -10 degree rise for a slightly lower cockpit that better matched the included PRO Vibe Carbon bars.

Blows away everything else on the road

After only the first ride aboard the Pinarello Dogma F10, I knew this bike was on another level. I ride a ton of bikes and have loved many, but this one is simply superb. To achieve such a great-riding bike, Pinarello uses a mixture of the highest-quality Torayca carbon fiber throughout, which add up to both a quality ride and an astronomical price tag. But, if you’re fixated on the price, then you should be looking elsewhere.

On top of using the finest materials and leveraging the latest advances in aerodynamics, the frame is built using asymmetric designs throughout. If you’re looking for a picture-perfect classic frame, you’ll struggle here as nearly every tube sits off center in some way, shape or form. All that TLC shows in how the bike rides and wins at the WorldTour level.

While it would have been fantastic to get the Pinarello Dogma F10 Disk, the rim-brakes drop some weight and with the dry weather we’ve been having, never posed a problem. I experienced powerful, consistent stopping on even the steepest of descents. Some have criticized Pinarello for not going with direct-mount brakes on their top-shelf bike, but the latest Shimano Dura-Ace R9100 brakes open wide enough to easily swallow 28c tires while offering superb stopping power.

Some manufacturers shy away from comparing bikes purely based on weight and instead focus on the outright performance of the platform as an integrated unit. That said, Pinarello frames are never noted as being featherweight, but with an 820 gram weight (53cm, stated), it’s pretty darn light and represents a 6.3% drop from the Dogma F8. Of course, it’s also stiffer and more compliant while maintaining the same geometry as the previous frame.

Always one more match to burn

Some hallmarks of great bikes are that they make you feel like you always have more to give. That supreme feeling when you feel you’ve topped out, only to find that you can dig deeper is something that great bikes provide. And, the Dogma F10 delivers that at the end of every lung-busting climb. It’s crazy, but I consistently felt like I had more in the tank and felt able to tackle impromptu climbs that weren’t initially on the menu.

Tops on that list of game-time decisions was an ascent to the summit of the Alpine Loop in American Fork Canyon — a 3100 ft. affair — because the bike felt so amazing (even though that decision would knowingly make me late for a meeting). I simply couldn’t stop climbing. So, up I went again and again — feeling like I was cheating with every pedal stroke.

That incredible responsiveness pays off in spades when climbing and sprinting, but would it translate into a rough ride or twitchy handler? The answer to that question is a resounding nope. Admittedly, my test bike was outfitted with wide, tubeless-ready rims running lower pressures, but dang is this one smooth ride. Certainly, higher pressures and narrower tires will result in a rougher ride, but why would you do that? Go wide, go tubeless and enjoy one of the smoothest all-rounders money can buy.

When it comes to descending, the Pinarello Dogma F10 instantly transformed me into a WorldTour descender as I knocked off previous PR’s with time to spare. It’s as if the Dogma can read my mind and anticipate every swooping turn — begging for more. Even at mach schnell on straight-line descents, the Dogma maintains its planted feel. I have felt more confident descending on this bike than any other bike I’ve tested.

For me, the overall handling and feel of this bike is on another level. Other bikes are great and all, but this bike is noticeably better in every aspect. Of course, the better your fitness, the better this bike performs, but I can say with confidence that riders of any level will appreciate the refined ride of the F10. Whether you buy the Dogma F10 as a showpiece or a daily driver, there is a reason why it is the reigning triple Grand Tour champion and 2x winner of the Tour de France.

Note: I’m 5’11” and the fit is quite sublime aboard the 54cm F10. With 13 frame sizes to choose from, be sure to consult your bike fitter for direction.

When it comes to superbikes, there’s no doubt that the Pinarello Dogma F10 is at the top of the list. While the F10 does feature unique looks, the beauty of the bike is in how it performs. Team Sky has only one road bike and it’s the F10 because it shines on flat, rolling stages and mountainous terrain alike. It features aerodynamics and a supple, responsive ride. This level of performance comes with a hefty price tag, but there’s no better all-rounder than the Pinarello Dogma F10.

Buy Now: Build one at CompetitiveCyclist.com

Yes, it's expensive and yes, it may seem over-the-top, but without question, the Pinarello Dogma F10 is the top all-rounder available today. With exhaustive palmares, the Dogma is a proven winner, but it's also the most enjoyable bike for everyday riding. It's fast, responsive, comfortable and seemingly-anticipates your every move.