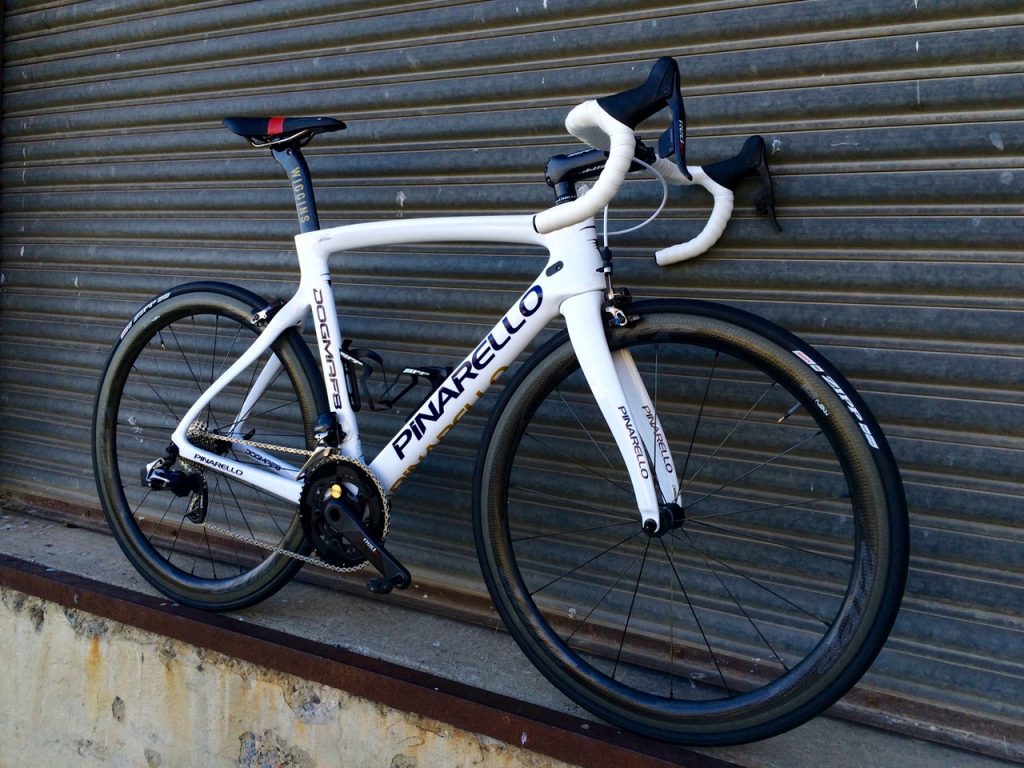 Every year, a handful of bikes pass through my garage. Most are great and some are measurably better than others. On occasion, though, a bike comes in that surpasses what I thought was possible. With those bikes, no manner of superlatives can do it justice as the miles just tick away in pure joy. It’s not just the Pinarello Dogma F8 alone that has won me over, but the whole top-shelf package that together has delivered the best all-rounder I’ve ever ridden.

The best of SRAM with Italian curves

The Team Wiggins-colored Pinarello Dogma F8 won me over at first glimpse. Much like Charlie Buckets slowly opening his Wonka Bar, I remember opening the box which revealed this white beauty. I admit that I’ve got a thing for white bikes and the Dogma just checks all my boxes. Color aside, this bike build is special and worthy to be hung on this $6000 Italian beauty.

If you’re going to go with a Dogma, you better be prepared to kit it out to the level shown here: SRAM Red eTap, Zipp 303 NSW’s and a Zipp SL Speed stem. Not that eTap is your only option (Dura-Ace would certainly do the trick), but the clean lines offered by SRAM’s wireless grouppo simply make the Dogma look that much more uncluttered and beautiful. Granted, not everyone thinks that Pinarello’s design language is sexy, but you’ve got to be living under a rock to not appreciate the aesthetics of the complete package shown here.

Aside from the kit, one of the noteworthy features of all Pinarello frames is the Italian threaded bottom bracket. With all the ire drawn from press fit bottom brackets, it’s refreshing to see those threaded cups on either side of the bottom bracket shell. I’ll also add that the included seatpost is easily-adjusted, but does require a trial-and-error process to get it just right.

With the Dogma pre-built according to my fit specs, it immediately fit like a glove. Long days in the saddle were supremely-comfortable with the ability to ride forever without fatigue. While the full weight is just over 15 lbs., I had a hard time thinking it was anything other than a 14 lb. rocket. It goes to show you (as many manufacturers assert) that bike weight is only one of the factors of making a great bike. The Dogma F8 is certainly a lightweight frame and this bike could be built to a 14-lb. fighter, but instead of focusing on weight, I’ll say that the overall package should be a much higher priority.

This build was specifically provided to showcase all the latest that SRAM/Zipp has to offer. From the wireless Red eTap kit to the new Zipp 303 NSW’s, everything is as it should be on a frameset of this caliber. If I had my druthers and deep pockets, there’s not a single thing I’d change about this bike.

After riding the Dogma K8-S briefly this summer, I was left somewhat unimpressed with the micro-suspension. It’s nice to have, no doubt, but unnecessary. It’s unnecessary because you can achieve a truly sublime ride quality with the Dogma F8 rolling 25mm rubber on a set of Zipp 303’s. Yup, I’ve been completely satisfied with the magic carpet that the F8 is delivering, as spec’d.

Even though it is a comfortable ride, it is snappy, fast and fun in a way a great race bike should be. This bike really feels “playful” and I mean that. Rarely do bikes have that sort of feel, but the F8 does and it makes for a pure joy to ride.

As a test, I did swap out the 303 NSW’s with a set of 30 Course wheels and the ride quality was only negligibly less smooth. Of course, the 303’s offer a more refined ride, but the F8 is naturally one of the more comfortable race bikes I’ve swung a leg over.

Fast as all get-out

Don’t even think about buying an F8 and not decking it out similarly to this one. You’re doing the bike and yourself a disservice. I think the profile of the 303’s is perfect for all-rounder use and have enjoyed pushing my limits on extended climbs (3000 ft +) and miles and miles of flat terrain. That 45mm rim depth, coupled with the aerodynamics of this frameset really make for a fast-feeling and fast-performing bike.

With some tour-worthy bikes, you get a twitchy handler. Not so with the F8 as this bike is wicked-fast, but also extremely confidence-inspiring — even for a bloke like myself.

Where things get even more fun is winding mountain descents. I’ve got the privilege of having one of the most iconic mountain loops in Utah as my backyard playground. The upper stretches of the Alpine Loop are narrow and feature many wonderful curves. The Dogma F8 simply swooshes from turn-to-turn with absolute pin-point confidence. I’ve felt connected to this bike in similar way to the Orbea Orca. It just feels like a natural extension of my body.

More on its descending prowess. The Dogma F8 is a crack descender. I don’t say that about many bikes, but this one will blow your mind and set all kinds of unreal top speeds on descents (as always, descend under control).

Now, let’s wrap everything up with stating the obvious… this bike is crazy, crazy expensive. And, unfortunately, some well-heeled cyclists will buy the F8 and put it on the wall — only breaking it out for a ride or two with their friends from Malibu — and that’s a downright shame. A real shame of egregious proportions because the Dogma F8 is one of the most, if not the most rewarding bikes I’ve ridden. It is beautiful, no doubt, but it’s built to be enjoyed on the road, so ride it fast and hard or Fausto Pinarello may show up at your door and take it back.

If you are in the market for the best bike on the market and have deep pockets, I can’t imagine a more perfect all-rounder than the Dogma F8. It handles like an extension of your body, climbs fast in the mountains and descends like it’s on rails.

Yeah, yeah, yeah... this bike costs an arm-and-a-leg. I get that. But, the Dogma F8 has performed beyond my wildest dreams. It is supremely-smooth and feels like an extension of my body in a way that no bike ever has. I'm now actually contemplating selling anything of value to get one of my own. Deck yours out like this one and you'll be treated to one amazing ride.