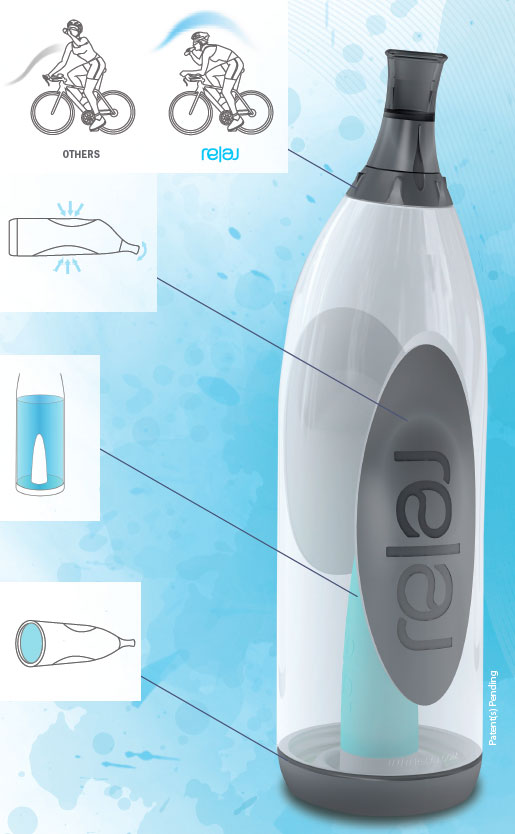 I just got the following product release from Relaj who is launching a new, ergonomic water bottle to enable safer hydration wile riding and keeping your eyes on the road. Looks like a great product to help cyclists hydrate safely while maintaining aerodynamics.

Here’s a bit of history on the product provided by Relaj:

The wheels of Relaj began turning in 2007. Its principal owners, Bruce and Becky, had a 14 year old son, Alex, who’d been peddling all over the steamy Tampa/St. Petersburg area, sometimes riding as much as 50 miles on an old, tattered, beach cruiser. Life changed dramatically for Alex that Christmas when he was given a brand new road bike. His riding distances increased, and a few months after his 15th birthday he expressed a desire to become a professional cyclist. Thrilled with his newfound passion, his parents hired a coach to help him train safely and effectively.

One of the coach’s first tasks was to cajole Alex to hydrate properly, especially while riding long distances in the scorching Florida sun. It took a while, but Alex finally took heed of this important message. Then, one July afternoon while watching a racer struggle to get water from his bottle during the 2008 Tour de France, he turned to his parents and matter-of-factly asked, “Why doesn’t someone invent a bottle that I can actually drink from?”

When asked to explain, he replied, “Well, I can’t get water out of the bottle without tipping my head way back, and then I can’t see the road.”

The safety implications of his response were clear, and further research uncovered a myriad of other performance-related factors with the bottles and cages currently used by cyclists. However, one glaring flaw stood out – the only way to drink from the bottle was to squeeze it intensely while tipping the head back, causing the rider to abandon the optimum aerodynamic position, and making it difficult, if not impossible, to keep sight of the road.

Convinced all these issues could be fixed, serious discussions began about a startup enterprise. A new family business was incorporated in August of 2008 and, shortly thereafter, a very talented product design firm in Merrimack, New Hampshire was hired. Their collaboration resulted in a top-to-bottom overhaul of this highly visible, yet often overlooked product category, and two new products — the Relaj Water Bottle and the Relaj Water Bottle Cage — revolutionizing water bottle shape, style, and functionality. Patents are pending for both products. 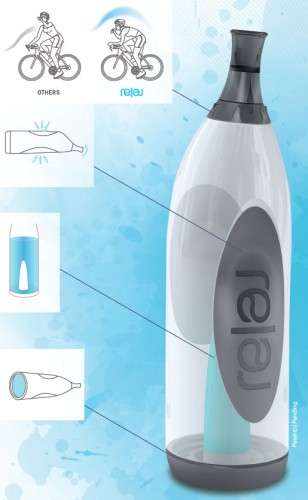