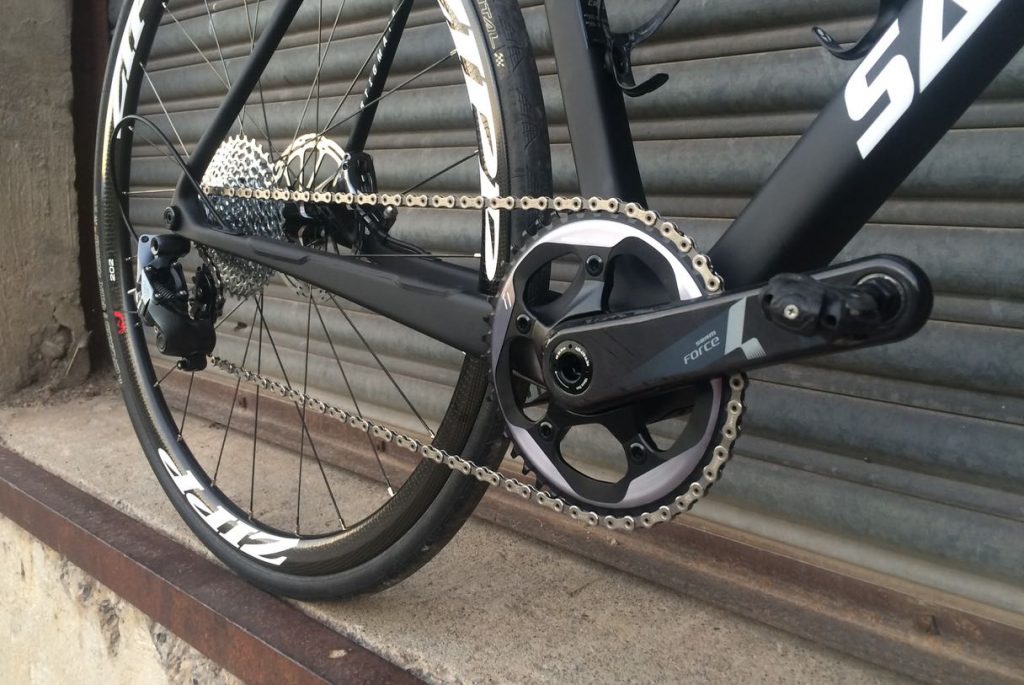 SRAM has effectively dropped a bomb on road bike shifting over the past year by introducing both SRAM Red eTap and 1x drivetrains for the road. Here we’re talking specifically about the simplicity of the new SRAM Force 1 groupset for road, CX and gravel bikes. After riding the full Force 1 drivetrain on a couple of different bikes, I can say that under most riding conditions, you’ll forget all about that pesky front derailleur.

Say goodbye to that front derailleur

At the heart of SRAM’s 1×11 drivetrain is the X-Sync chainring. This narrow-wide tooth design essentially eliminates dropped chains and says hasta la vista to the front derailleur. In their California test lab, I watched as engineers put their chainrings to the test by inflicting extreme cross-chain beyond what’s physically possible — it just simply doesn’t drop loose. That rock-solid chain/chainring combination in the lab has proven to be equally-capable in the field. But, the full Force 1 kit is much more than awesome chainrings. The whole kit has proven wicked-fun and capable on all flavors of roads.

My first miles were on a mixed road/dirt affair outside of San Luis Obispo, CA aboard the Salsa Warbird. Initially, the missing front shifter on a road bike was a little odd, but as I cycled through the gears, I quickly realized that I had plenty of low range to make it up any climb. And, I had plenty of high range to pedal fast on the flats.

At home in Utah, the roads get decidedly steeper and the climbs get lengthy, but the low range offered by the 44/36T combo proved sufficient for even the steepest of ascents. In fact, that gear ratio is 2.4 — the same as a 34/28T found on most compact cranksets. While it’s plenty low, on long climbs (where the roads undulate and you’re feathering between gears), the cassette gaps do come into play. Sometimes you can’t quite get that right gear, but all that’s needed is a little faster cadence or that next uptick in the road to get back on track. I noticed this on a 2000+ ft. climb in the Wind River Range, WY and on my usual haunts here in the Wasatch on the Santa Cruz Stigmata.

On the other end of the spectrum — when the tarmac tilts downward in earnest — you’ll top out at about 35 mph. That could be improved with a 46T chainring, but in 11-36T mode (the largest cassette available without an XD Driver), going 46/11 does lose some low-end. In the end, I was fine with lower gears to save my knees and coast on occasion.

In short, with such a wide-range cassette, there’s bound to be some gear jumps. If you know that going into it, you won’t be surprised when it happens. I got used to it and was satisfied sacrificing a little bit of fine-tuned gearing for rock-solid chain confidence on gravel and dirt.

One of the trademark attributes of SRAM’s shift levers is the accurate and speedy shifting. There’s no mistaking when a shift occurs as it features an audible click at the shifter followed by an immediate response by the rear derailleur. Additionally, the large paddle and DoubleTap shifting lends itself well to cold weather riding as it’s easy to manipulate with thick gloves on — something that’s difficult for Shimano’s shift levers.

Dropped chains? Not a chance.

Amazing. That’s the only way to describe how well the X-Sync chainring and X-Horizon rear derailleur work. The combination of the two keeps the chain taut — even when barreling through a roughshod cyclocross course. Not even so much as a single bit of chainslap can be heard. And, when it comes time to swap out that rear wheel, the cage lock feature makes that process as easy as pie. I shouldn’t sound surprised at all this because I’ve long been sold on SRAM’s 1×11 MTB offerings, but it’s just so awesome to get the same experience on a road bike.

Let me break it down for you on a road type level. On the road, you’ll appreciate the simplicity and yes, you may run out of gears on that long descent. But, you’ll have plenty of low-end to climb up anything. On gravel, this drivetrain is an absolute joy with just the right ratios for anything I threw its way. And, on cyclocross courses, I pretty much stayed in the middle gears and not once did I feel over or under-geared.

As far as the brakes go, SRAM recommends 160mm rotors when riding exclusively on the road. They were hard to keep rub-free. Some of that is due to the larger rotors, but I’ve also found the pads to jiggle around a little more on rough roads. Most of the time it goes away after a few touches of the brakes, but it does get a little frustrating to do it several times on a single ride. I’ve not had that same experience on Shimano’s Ultegra units. Could it be the smaller rotors? Might be a factor.

The slight rubbing aside, there’s no beating the ergonomics of the Force 1’s carbon brake levers. The hoods and levers just feel natural in-hand and make long stints in the hoods a delight. Modulation and lever throw follows suit and really feel on par with the competition.

Ditch that front derailleur, they said. It’ll be fun, they said. Well, they were right — going 1x on a road bike is legit and the full SRAM Force 1 grouppo is the gold standard. Choose 1x if you ride all roads and want fuss-free shifting without any concern for dropped chains. The brakes are powerful and offer tons of modulation, but do tend to rub a bit here-and-there.

That front derailleur that rubs in certain gear combinations and causes dropped chains right when you're stepping on the gas -- yeah, that thing. Ditch it. Go ahead, get rid of it and go with SRAM Force 1. You'll simplify your life, drop some weight and get the confidence of zero dropped chains, ever.