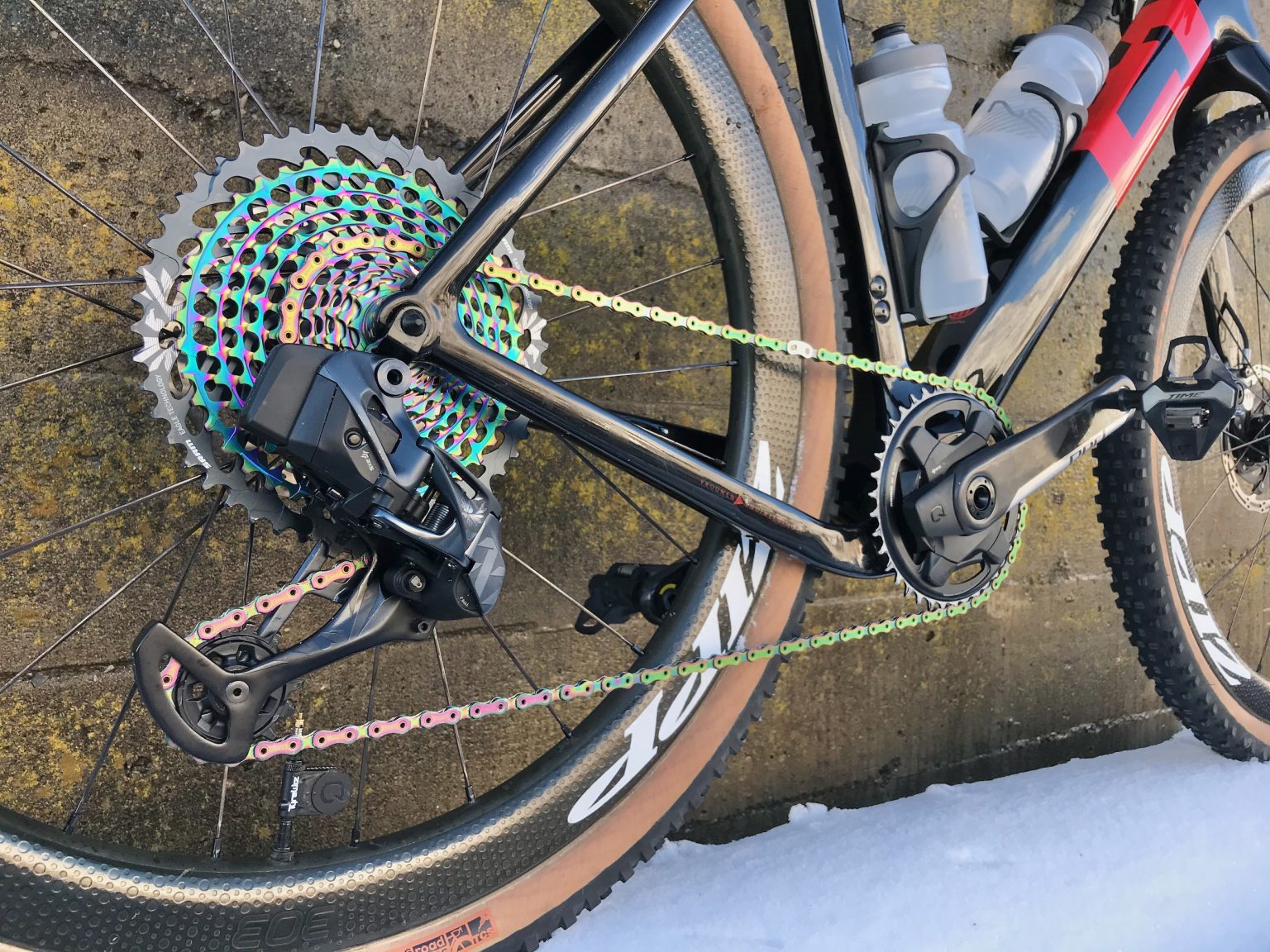 The beauty of SRAM’s AXS groupsets is the ability to mix-and-match for any type of bike or terrain. And, you can add to the mix the option of 1×12 or 2×12 just to make things interesting. After thousands of miles aboard Red eTap AXS and Force eTap AXS, it was time to go for the eTap AXS Mullet Build

That 1×12 mullet simplifies everything

Mountain bikes have been running 1×12 since SRAM Eagle technology hit the market in 2016. But, until eTap AXS came around in 2019, there was no way to outfit a road or gravel bike with SRAM 1×12. The beauty of AXS is that all components are interchangeable. Want to run Force eTap AXS with X01, XX1 or even Red? It’s all possible. These combinations are all spelled out by SRAM right here.

Going 1×12 is great for most riding terrain and is flat-out superb for steep, technical adventures or bikepacking. And, it greatly simplifies everything. You’ve got one less component to fuss with and just one battery to think about.

Without that front derailleur, eTap’s paddle shifting is even more logical — it’s simply a left or right paddle affair. And, those shifts are as fast as ever. They are so fast that I think they are even faster than Red eTap AXS (it’s splitting hairs, but my mind feels like it’s a minute fraction faster). Every ramp on the XG-1299 cassette is optimized for rapid shifting — and it darn well better be with Nino Schurter and Kate Courtney depending on them while racing the world’s toughest XC courses.

While my test period has been during the winter months, I’ve been able to appreciate the beauty of the “Exploro Mullet Build” to the fullest on slushy roads, mixed snow/gravel and cold pavement here in Utah and sublime “cowboy gravel” while in Oklahoma City over the Holidays.

Mullet builds can be top-shelf, like the Red/Quarq/XX1 combo I’ve been testing or they can be made more cost-effective with any level of Eagle 12-speed cassette, chain and crankset mated with Force eTap AXS shifters and the X01 Eagle AXS rear derailleur. It may seem like a hodge-podge, but going that route can be more cost-effective.

With several gravel bikes being 1x only, the idea of going with a mullet build isn’t always done for simplicity, sometimes it’s a necessity for tire clearance or lack of front derailleur mount (as on the Allied Able or Open WIDE, for example). Regardless of your bike’s ability to run a front derailleur or not, mullet builds are always an outstanding option. Simple left/right paddle shifting with AXS shifters is as intuitive and easy as it gets. And, those large paddles are easily-tapped both with or without gloves. Honestly, SRAM has winter shifting nailed — all others are problematic with thick winter gloves on.

As mentioned, the Exploro Mullet Build went along for a road trip to Oklahoma City over the Holidays. It didn’t take much convincing to bring it along — particularly after Strava and Google Maps yielded gravel routes aplenty right from the backdoor. So, with a handful of gravel loops in mind, I explored northwest Oklahoma City.

After some initial scouting, I found plenty of red dirt, pothole-ridden roads, smooth gravel, gravel on top of old pavement and endless rolling hills with large, chunky gravel sections. Those conditions were often compounded by strong winds just to make things interesting. In spite of some of the occasionally rough conditions, chain retention was never an issue and the drivetrain remained quiet and collected, even though I was often bouncing around like a jackhammer. Shifting, under all conditions, also remained smooth and fast. There’s something special about the XX1 AXS rear derailleur, cassette and chain combo because it shifts with panache.

That 50t rear cassette is nice as a bailout option, but I rarely put it to use in Oklahoma or even at home in Utah. That shouldn’t come as much of a surprise, given that I was running a small 38t front chainring. This setup was a little on the low side (I’d go 40-42t chainring), but made for a superb bailout gear when I did use it. On the top end, it pedals out right at 29 mph. As it turned out, a little bit of coasting never hurts, so I just relaxed on long descents.

During the winter along the Wasatch Range, most of the available miles are on the road with occasional gravel between storms. Finding the right gear hasn’t been a problem and I haven’t missed that front derailleur at all.

Even though popping the battery off and charging it is already very easy, the mullet build makes charging even simpler. And, long adventures are easily covered by carrying just a single spare.  As an added bonus, the Cage Lock button makes wheel changes or drivetrain cleaning even easier. During my testing, I cleaned and lubed the chain and drivetrain about every 50 miles. Throughout those miles, shifting remained precise and smooth — red dirt, winter grime and all.

For many, gravel is about freedom and not about counting watts, but the Quarq DZero Power Meter sure was a gem to have on this bike. It connected to Lezyne, Wahoo and Stages head units in a jiffy every time and provided accurate left/right power data and cadence. Quarq is the leader in power measurement and reliability, so if you choose to go that route, you won’t be disappointed. I quite like the more integrated design of the AXS version as well.

The hoods are ergonomic and the brake levers are easily-reached and pulled from the hoods or drops. Reaching those shift paddles is equally-easy. Overall braking power and modulation remained excellent with only rare instances of rotor rub for a few seconds here-and-there. With 160mm front and rear rotors, there were no issues with excessive heat or squeaking either.

It’s pretty obvious that a 10-50t cassette will have large gearing jumps, and I’m not going to tell you it wasn’t noticeable. My recommendation is to just take that as part of the package and roll with it. Not once did it truly interfere with my climbing ability on long, sustained or rolling climbs. Would 2×12 be nice for a fast group ride or a long, sustained climb? You bet. But, Red or Force eTap AXS 1x mullet builds aren’t about that fast group ride, tempo or sprints. Instead, it’s about adventure, smiles and fun and that’s just what I had.

The mullet is real. And, going 1×12 on a gravel bike reduces complexity, simplifies shifting and adds reliability so you don’t have to worry about chain drops, chainslap or front shifting at all. Choose that front chainring wisely based on your terrain and enjoy a wide-range cassette. The SRAM eTap AXS ecosystem is friendly and easy-to-use with easy firmware updates and configuration options using the AXS mobile app.

No question, going 1x12 for that gravel bike will make for a simpler, more confidence-inspiring drivetrain. X-Sync chainrings keep chains securely in place and wide-range XX1 or X01 AXS rear derailleurs make quick work of wide-range cassettes. Red eTap AXS Mullet Builds are going to be your lightest, raciest options, but will cost you. Mix-and-match any SRAM 12-speed cassette and chainring/crankset option for lower cost flavors.