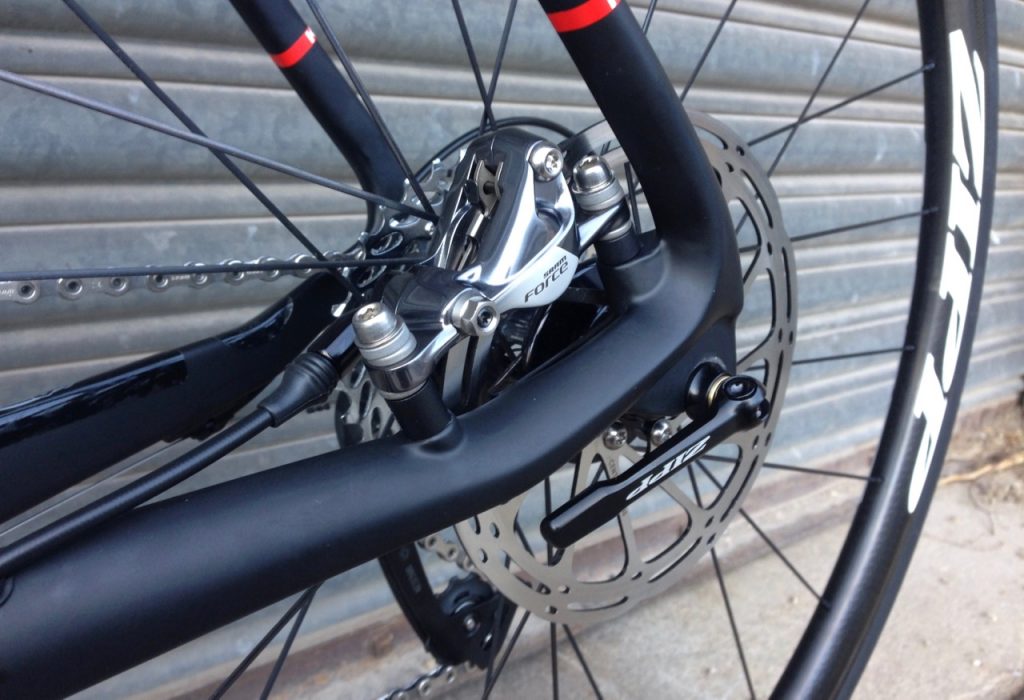 The Rub With Road Disc Brakes

Unless you’ve been under a rock, the storyline about road disc brakes this past month reads more like daytime TV than Saturday evening crits. For the 2016 racing season, UCI WorldTour and Pro Continental teams were planning their disc brake moves. They were now free to use them whenever they wanted. All teams tinkered and neutral support vehicles scrambled to accommodate. Only two teams were notably onboard (Roompot and Lampre-Merida), but every major team had been spotted training with disc brakes.

Heading into the Spring Classics, Lampre-Merida broke ground as the first WorldTour team to go 100% disc brakes aboard their new Merida Scultura Disc frames with Shimano Dura-Ace stoppers. After a successful race at The Tour of Flanders, things went south at Paris-Roubaix. There was a crash, an alleged disc-induced injury (not for the squeamish), “disc brake hate-mail,” a fair bit of disbelief and a knee-jerk reaction by the UCI to ban disc brakes in the professional peloton. Then, adding more drama, France and Spain both banned disc brakes for all sanctioned sportive races in their countries. Well, that escalated quickly.

So, what are we all to make of this circus? Who will be testing the latest disc frames and components to be sure they are safe for the rest of us? And, should we all be afraid of those spinning meat slicers? In light of all this, I want to add a little bit of real-world experience into the current road disc melee.

Having ridden road disc brakes extensively for the past two seasons and thousands of miles aboard rim brakes, I’ve got a little bit of experience aboard both technologies.

My first extensive miles on road discs were aboard the BMC GF02 Disc, which featured mechanical Shimano disc brakes with 160mm rotors. I had no complaints — particularly as I descended 2000+ vertical ft down a mountain pass during a violent summer rainstorm. During that descent, my wife nearly crashed into me and almost went off the road because her carbon clinchers simply couldn’t brake reliably enough to keep it under control.

Since that time I’ve ridden Shimano and SRAM hydraulic discs in wet and dry weather on pavement, gravel and dirt. Modulation is off-the-hook and brake feel is simply unmatched by rim brakes of any type. And, all the nay-sayers who think all that power will just cause wheel lock-up: I’ve never experienced it one time with discs while I have on many occasions with rim brakes. Modulation for the win.

So, I do like road disc brakes, but I’ll also be the first to admit that they aren’t for everyone. The immediate 1 lb. weight penalty makes the weight weenie in me cringe and admittedly, discs just look out-of-place on svelte all-rounders. Looks and weight penalty aside, there are more reasons not to like road discs.

Are road discs right for you?

At the end of the day, opting for road discs needs to be considered with eyes wide open. If you are a weight weenie, roadie purist or ride mostly flat terrain, you can continue riding rim brakes and be perfectly satisfied. But, if you ride in all conditions and all types of roads or constantly challenge yourself on mountainous descents, discs should be a strong consideration.

Without question, discs will get even more common in the future and they may very well make their way back into professional racing (possibly next month) once riders get past the fact that a small spinning disc is the least of their worries in a pile-up. And hopefully, cooler heads prevail amongst amateur governing bodies and the rest of us can continue to ride road disc brakes in competitive rides and races.

The bottom line for me is that in spite of the weight penalty, I can’t deny the increased braking control and consistency in all conditions. I’ve experienced consistent braking on wet, treacherous mountain descents with disc brakes. I’ve also experienced that scary feeling you get when trying to stop on rain-soaked carbon clinchers. On top of all that, I can’t get past the fact that the brake tracks on my expensive carbon rims won’t get worn out and that by removing the brake track it paves the way for wider rims and fuller tires for improved traction, comfort and control — all byproducts of switching to disc brakes.

I like road discs and am willing to patiently wait until all the hullabaloo surrounding them settles down so we can all just get out and ride. What about you?