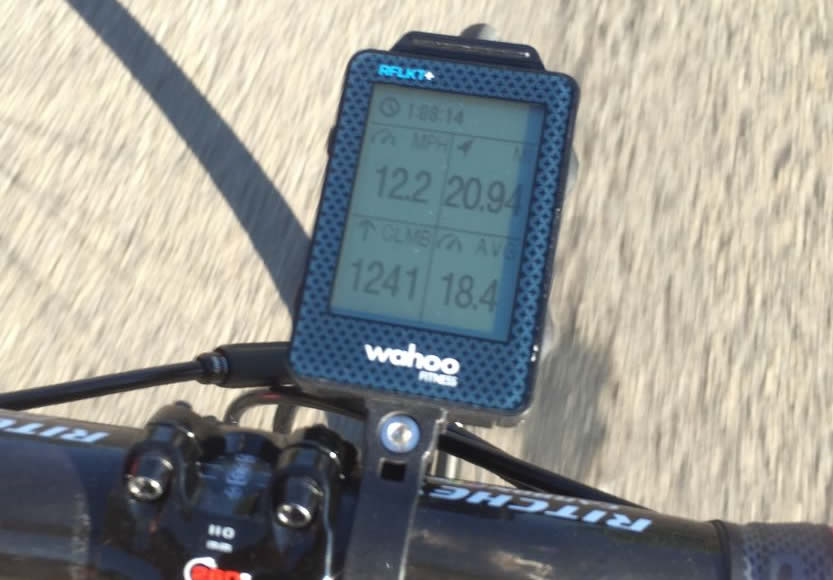 Wahoo Fitness offers a wide variety of products to help you train harder and more efficiently. Their recent entry into the bike computer market is the RFLKT+, which acts as a head unit for either the Wahoo Fitness app or Strava’s app. I’ve been testing the core unit now and it’s quite impressive.

Lots of Features with Smartphone Convenience

There’s no getting around the fact that we all ride with our smartphones. Part of it is for safety and convenience, but the rise of ride tracking apps, like Strava, have turned smartphones into bike computers on the cheap. Wahoo has capitalized on this opportunity with the RFLKT+. This Bluetooth device simply mirrors the data from the Wahoo app so you don’t have to take your phone out of your pocket.

Getting the RFLKT+ set up is an absolute breeze. It has also been far more user-friendly than either the Cateye Strada Smart or the Topeak PanoComputer. The Wahoo Fitness iOS app is drop-dead simple to use and provides an intuitive way to personalize the settings and display of the RFLKT+

Pairing has been rock-solid throughout my testing and I’ve paired it with three separate iPhones during my course of testing.

Mounting up the RFLKT+ is simple. You can use the included forward-facing bar mount (what I used) or the included stem mount. If you already have a quarter-twist mount, such as a Barfly, you can also use that too with the included adapter.

As mentioned, I used the fortward-facing mount for a clean and professional look. Having so much data available at a glance has been fantastic. Everything is configurable. I chose to display four items as my primary screen: Current Speed, Miles Ridden, Vert and Average Speed. Secondary screens were simpler with one being speed-focused and others showing phone battery, altitude and temperature. It’s so easy to configure and so flexible — you can show whatever data you want.

While I didn’t connect the RFLKT+ to other ANT+ devices during my test, you can sync it with power meters, cadence sensors, heart rate monitors and more.

The screen boasts a large, dot-matrix display that’s easy to read under most conditions. There were times in the morning or in direct sunlight where the screen lacked proper contrast and everything washed out. I also found that the 4-up display screen (my primary one) did get a little difficult to read on-the-fly. When I wanted specific data, I’d just switch screens — problem solved.

What’s more, you can set up screens for each workout profile (Running, Treadmill, Cycling, Indoor Bike Trainer and Spin Class).

Unlike the other two wireless units tested this summer (Topeak PanoComputer and Cateye Strada Smart), this one has yet to run out of battery. Since the unit is not rechargeable, you do have to re-load it with a new CR2032, which is easily found just about anywhere. So, it not only sips on the internal battery, it’s very efficient with both the iPhone 6 and 5s I tested. After a 3+ hour ride, the phone battery remained above 60%.

I was also impressed with the native integration with Strava. Yes, you can use the Wahoo Fitness app and connect it with your Strava account for easy syncing. But, you can also connect the RFLKT+ directly to your Strava app so you don’t even have to mess with another app. While the direct sync with Strava is nice, you do lose the screen customization options, so I stuck with the Wahoo app and used the sync button at the end of every ride.

The app has proven reliable and, as mentioned, is very user-friendly. I didn’t experience any crashes or lost rides throughout my testing.

If you’re looking for a GPS alternative, but still crave tons of data, the RFLKT+ is an easy choice. It sips on batteries and is easily personalized.