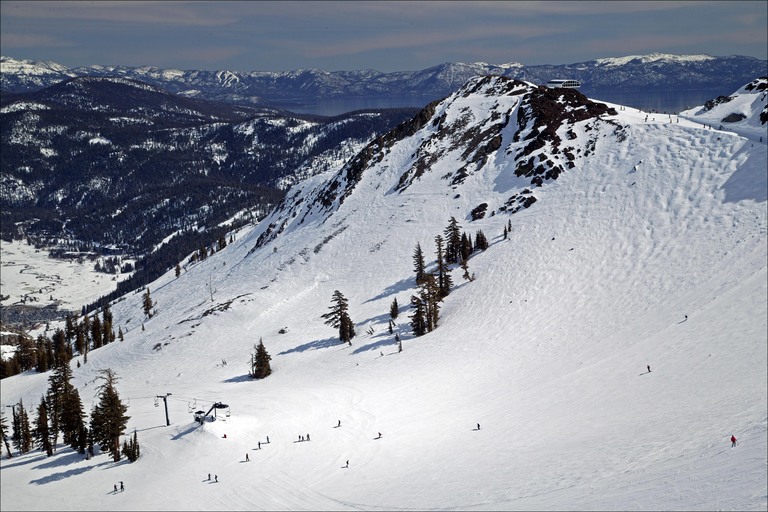 One afternoon this season I packed my bags, kissed Emily good-bye, and hopped in the ICE Poles truck with Cameron Vigil – pow-seeking Alta boy and compulsive gambler. After watching Cameron lose several hundred dollars at the tables in Reno, he and I focused our minds on the event at Squaw the next day – the X-Qualifier.

This wasn’t my first time competing in the event. Last year it rained hard every day, but it was still one of my favorite competitions ever. Tanner, Adam Schrab, Tim McKeever and Skogen Sprang led the pack, throwing some of the most stylie moves of the season. This year the skies looked clear, but that meant that there were a lot more competitors, too. It was anyone’s podium this time.

It was freezing in that humid, West-Coast-sort-of-way that chills you to the bone. My toes were numb before we even made it to the hit.

Before the sun rose, I hiked up to the competition jump to check it out with a few of the other athletes. It was freezing in that humid, West-Coast-sort-of-way that chills you to the bone. My toes were numb before we even made it to the hit.The jump was definitely big enough, and it was rock hard. We measured it out – 60 feet from the lip of the jump to the start of the landing area. The part in between was carved out, sort of resembling a gap jump. The lip of the hit was at least 15 feet high above landing zone, and it looked like it gave some good, high pop.

The event organizers gave us some shovels and the liberty to shape the take-off and landing to our liking. It was like trying to shape a block of ice with a spoon. As I stepped back to examine some of what we’d done, I heard some one yell out my name. I whipped around and there was Tanner, trudging up the slope with a big ol’ smile on his face.

“Man, I haven’t seen you in forever!” we both yelled. After catching up on each other a bit, we started talking about the hit, and what a big improvement it was over last year, and it really was. Last year the jump was a lumpy, misshapen hunk of rainy slush. It was better this year, but I’ve got to be honest – it was one of those jumps that tugs at your nerves a little. We grabbed shovels and tinkered with the lip some more, but there came a moment when we just said, “Screw it,” and started training on the thing.

I know, I know – never invert your first time on a new jump. I broke the cardinal rule. I came up short and slammed my helmet into the ice. A little rattled, but apparently okay, I hiked back up to the starting gate and gave it another go. I stuck it this time, but I was feeling a little edgy, that’s for sure.

The comp started, and immediately you could see who the contenders were: Tanner and Adam were schooling everyone again, but my bros from The Canyons were representing well, too. Heath Ordway surprised everyone with a very stylie, corked-out, d-spin 900. John Turkula was throwing switchback-fulls like it was no one’s business, and little Mike Wilson from LINE was rotating some of the cleanest cork-7 grabs I’d ever seen.

I know, I know – never invert your first time on a new jump. I broke the cardinal rule. I came up short and slammed my helmet into the ice.

After a while the sun sat high above the peaks, but it was still the coldest day I’d had in a long time. I hadn’t felt my toes since that morning, and now I couldn’t feel anything below my ankles. I did my part, stomping some Lincoln-grabs, but I have to admit – I wasn’t sad when I was eliminated after the second heat. I sat back and enjoyed the show, toes still numb, while munching on a $1-dollar crepe from one of the event sponsors.Kyle Dempster from The Canyons rotated very clean underflips, and our little toy action figure, Mitch Lemmons, dropped jaws with a lawn-dart front flip to late 180. I don’t think he meant to peel out onto his face like that, though.

In the end, Tanner took first place with the cleanest switch rodeo-tailgrab I’ve ever seen. . If you don’t know who Tanner Hall is, I don’t think you can really call yourself an avid skier. This year he went on to take first place in the X-Games Big Air (that has as much viewership as the Olympics, for heaven’s sake!), took first at the US Freeskiing Open at Vail, dominated every other comp he was in, and starred in more movies than Russell Crowe. And he’s only 17.

Second place went to Adam Scrab, who threw one of the craziest fakie moves I’ve ever seen. He calls it the Wisconsin 540. It’s like a switch-backflip with a misty 540 thrown in for good measure. One of our boy from The Canyons, John Turkula, took third. I was happy to see Heath place in the top ten with his d-spin 900, too. He had a good year too, taking first place in at least 3 other big air comps out here in the West. His dad’s got to be proud – that’s for sure.

So we motored on back to Utah, this time skipping the gambling tables in Reno. It took weeks for me to get over the frostbite in my toes from that day. I thought they still amputated for frostbite. Emily said I was nuts – that we didn’t still live in the dark ages. You don’t just go whacking off parts that don’t work anymore. Well, I hoped the feeling would come back someday, and now that it has I guess I’m a medical miracle. Yahooey – just in time for shoulder surgery! I’ve gotta stop doing this to myself.