In the past few years I’ve gone through several pairs of Raichle Flexons and a smattering of race boots from Nordica, Tecnica, and Salomon. After finally getting fed-up with blisters from skinning into the backcountry in traditional alpine boots, I decided to swallow my alpine-skier pride and take a look at some touring boots. I ended up finding the best-fitting boot of my life: the Garmont G-ride.The 4-buckle G-ride is not Garmont’s burliest boot – that’s the Adrenalin G-fit. But the G-ride is the next-lighter boot in the lineup, and has plenty of burl to go around. There is a similar Garmont boot called the Megaride that many confuse with being a more aggressive boot than the G-ride, but it is in fact an even lighter version of the G-ride that is also Dynafit compatible for those who are into longer hard-core tours. Me – I’m just an alpiner who likes to earn a few fresh turns weeks after a storm. The G-ride was the right selection.

I should mention that I was originally drawn to the oh-so-classic Scarpa Laser and the Denali TT. While on paper they look like great options, on foot they both felt like they had huge insteps. I couldn’t buckle the lower-cuff down nearly tight enough without going way too short in the length. I have a completely average foot: average width, average arch, average instep, average heel. And I just did not understand how these Scarpas could even appeal to normal foot shapes. The year before I had used some Garmont telemark boots on a day when I was pinning, and they fit well – so that’s when I decided to take a look at Garmont.

Man, oh man – once I slid the G-rides on I knew I had never tried on a boot that knew my foot like Garmont did. I feel that that G-rides have a normal instep, with an average width and a normal-to-wide toe box (even with a performance fit, I like to wiggle my toes a little).

The G-ride I chose also has a G-fit innerboot that you can heat up at your local Surefoot (or in an oven, in a pinch) and then it molds to your foot when you insert it in the outer-shell and buckle it down. I also got some Surefoot orthotics, for a perfectly custom fit. The great thing about the custom innerboot is that it’s not the exact same as the heat-molded liners of other manufacturers that are just like a big neoprene sock. The G-ride’s G-fit liner is a well-designed liner with strategically-placed stitching. For example, horseshoe-shaped material is stitched around the ankle and heel pocket to really lock in the heel like a good race liner. With the heat-molded liner and some Surefoot orthotics, they fit like a glove. 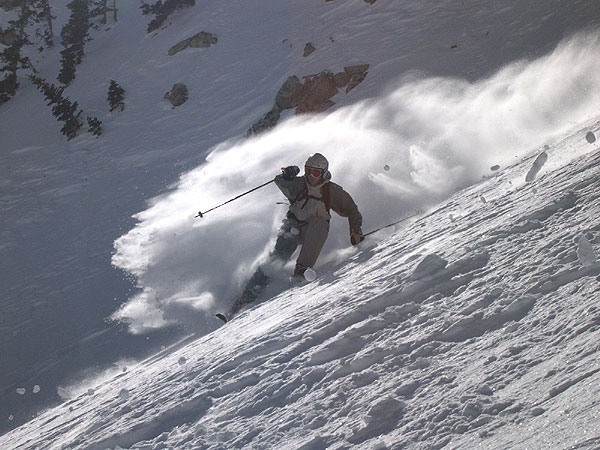 However, I have chicken-calves and the upper cuff was pretty loose on me. So the boys at Surefoot again hooked me up: a pair of Power Booster straps to tighten down above the upper-cuff (around the innerboot’s shin). Once I tightened-down those straps, I knew I had a comfortable touring boot that could hang with whatever I threw at it on the downhill laps.

And that’s what it comes down to – a performance boot that fits your foot. And Garmont fits mine. Much to my surprise, they also had a sturdy flex for being a touring boot, and the power strap added to the beefiness. These are not for the touring purist – they are squarely aimed at people like me crossing over from alpine who demand good downhill performance in all conditions. And with four buckles, a power strap, a solid flex, a simple-to-use “walk” feature, and a relatively light weight (compared to my previous alpine-only boots) they nailed the category squarely.

I have to admit – after riding the G-rides a few times, I eBayed all my other boots and put touring bindings on all my skis. And why not? The AT gear of today is better than the alpine gear of yesteryear – and I was happy then. I’m even happier now, because AT stuff is so much lighter weight – it’s awesome. I may even make the ultra-light Kahru Jak BC my next fat ski to make it the ultimate Rocky Mountain skier’s dream setup. See you in the backcountry…