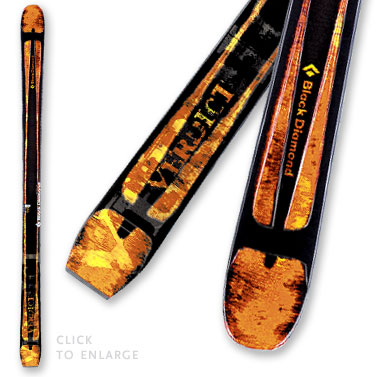 Not long ago I had the chance to ride one of the best alpine touring fat skis for 2006: The Black Diamond Verdict. The Verdict has some great girth, and yet still feels light enough to flip pancakes. While certainly not tuned for in-bounds riding, its skills in backcountry pow are unmatched. My verdict for The Verdict: On all counts of being light and surfy in the pow, guilty as charged. On all counts of laying nice trenches in the groomed, the jury’s still out.

The Low-down on Black Diamond’s Verdict

The Verdict is Black Diamond’s fattest ski, boasting a portly figure at 128-98-116 on the 180cm pair I rode. That’s quite a departure for a ski company that’s more known for its soulfulness than for its aggressiveness. But I suspect the Verdict and its svelte companion, the Havoc, are quickly changing BD’s reputation to favor aggressiveness. There’s a revolution going on, in case you didn’t know it.

I had the chance to ride the Verdict in soft Utah pow as well as on a few groomers (since those of us who are crossing over to AT still find ourselves in-bounds on several occasions). The pow is definitely the ski’s home. At 98mm underfoot, the Verdict is downright surfy, and a lot of fun to let ride.

As you would expect, its waist width lets you stomp out landings much easier than most touring-specific skis. I was able to hit a few diving-board cliffs at full tilt, expecting to bomb-hole the landings. I have to admit I was surprised to land them standing and ride away without so much as a hand down. Try to do that on other touring skis!

One thing I haven’t yet touched on is how exceptionally light the ski is, given its width. I was amazed at how solid it felt in all conditions, and yet feather-light compared to other fat skis. If you want a fat ski for touring, you’ll be hard-pressed to find one with the same girth that doesn’t punish you on the uphill laps.

The one downside for the Verdict (other than the sub-par graphics, in this author’s opinion) is the effort it takes to carve on the groomed. It would start the turn all right, but would not round out the turn as well as other fat skis I’ve ridden. However, take that with a grain of salt – this is not intended to be an “in-bounds” ski. It’s for earning your turns in Utah powder. And its width & light weight make it the hands-down winner in that category. If you’re looking for a light ski for dawn patrol tours in the Utah pow, then you don’t even need to deliberate: the Verdict is absolutely your ski.