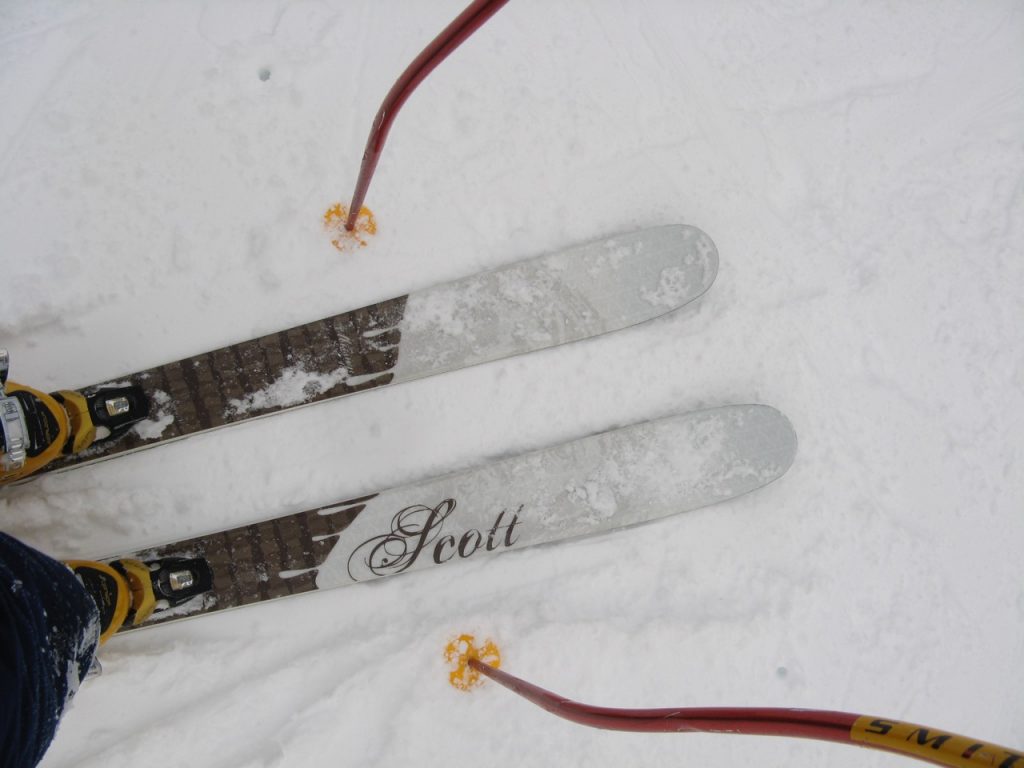 Scott has long been a household name in goggles and poles, but their other product lines–namely skis–have been, until recent years, schlepped overseas. I don’t know if the migration of Scott skis came after some Euros inadvertently left them here in the States and they multiplied like rabbits, or if it was a deliberate effort from Scott USA–I’ll leave that up to your imagination and good sense. Either way, their versatile ski line serves up top-shelf performance at still affordable price-points.

After realizing that my Atomic Beta Rides were a little too narrow overall, I went in search for an inbounds ski that would be versatile enough to tackle bulletproof hardpack as well as float through deep Utah pow and blast through the leftover crud. I wanted something that felt as good overall as my 2006 Head MoJo 90’s. I looked around and found the Scott Missions to be the perfect dimensions for a one-ski inbounds quiver. 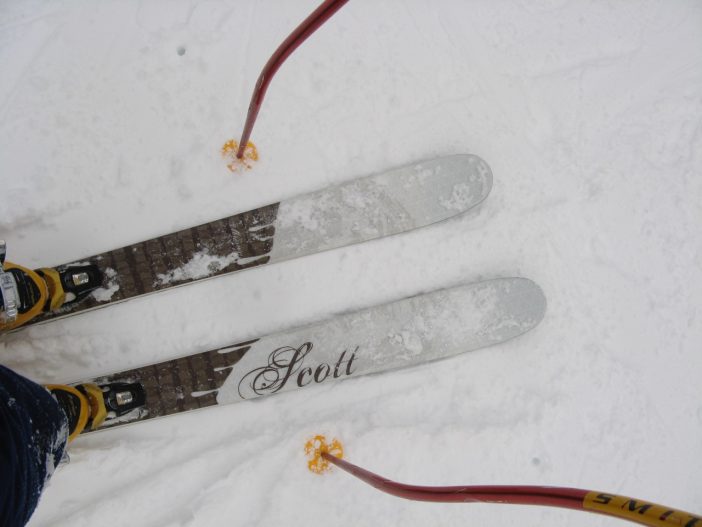 About the Scott Mission 183

As mentioned above, Scott skis have only been in the USA since the 2005-2006 season, but have been sold in Europe for over 10 years. The guts of the 2008 Scott Mission’s remains the same for this year–with only a cosmetic change for this season. I dig the design–subdued and stylish. Too many skis these days are overdone pre-pubesent “artwork” and the Missions look cool and classy.

The construction of the Missions consists of a wood core with triaxial laminate sheets on top and bottom with a cap top. The build process is called SSC Cap or Sandwich Sidewall Cap Laminate. In addition, the Dual Radius sidecut is intended to make the skis more versatile–pressure them hard for short, quick turns or pressure them smoothly for large, sweeping turns.

To round out the construction, Scott uses their Pro Tip progressive tip height radius to help control tip deflection and keep the skis firmly planted to the snow.

Dimensions of the Scott Mission’s are as follows:

Instead of forcing all lengths to be the same dimensions, the ski is optimized for both length and width to better suit lighter or shorter skiers. The Missions have received rave reviews from most of the industry press and heralded as great all-around performers. 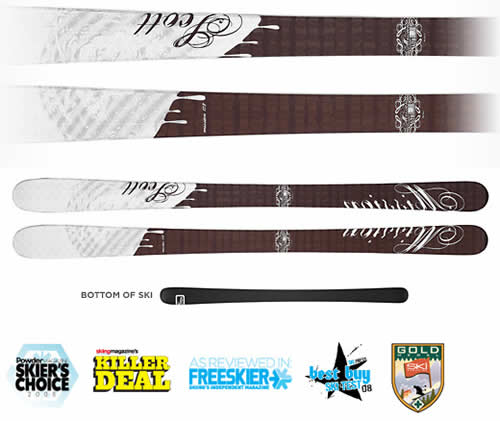 The Missions are my answer to the “one ski quiver.” I haven’t had the luxury of a 3-4 ski quiver for several years, so I look for a versatile ride that can handle all conditions. And, these days, I feel that a “one ski quiver” should have a 90mm waist at a minimum. Ski technology has evolved a lot in the past few years–90mm used to be only for dedicated powder skis just a few short years ago. Now, I’m telling you that it’s the minimum you’ll want for an all-around ski out here in the West–believe me!

My Missions are mounted with the bomber Rossignol Axial 2 140 ti Pro bindings in the bling bling gold color, which suits the brown and white Missions just fine and provides a solid 14 DIN.

There are no metal sheets in the Missions and the medium-stiffness flex is smooth and perfectly-suited for all-around riding in all conditions. The topsheets are ribbed with micro-grooves that remind me of those 3D stickers I had as a kid–you turn them one way and Superman is flying, then turn them the other way and Superman is saving Lois again. Sadly, the Missions don’t have a 3D graphic to them, just the ribs.

I rode the Missions at Sundance on a mixed bag day where the lower mountain was fairly firm groomers and the upper mountain had a mixture of untracked in the trees and mini-bumps with crud on the main trails. I did get a chance to drop one line into Bishop’s Bowl where I got 500 ft. of untracked, knee-deep windbuff–that’s when the hooting and hollering began in earnest.

Bombing down the groomers, I felt I could let the Mission’s loose and carve big arcs all day long. They track amazingly well and stay planted firmly on the snow even when plowing through rough, end-of-day groomers. Laying solid arcs and rolling from edge-to-edge was super easy and required little effort on my part. I felt I could just let them run and never once did they become unstable. Short, quick turns were just as easy with the proper pressure and angulation.

One thing I did notice is that these babies like to be on edge and they like to carve their turns. The occasional high-speed skidded turn–which is sometimes necessary to avoid obstacles or other skiers–was difficult to maintain because the skis wanted to hook up and arc instead of skid. While this is a good thing in most instances, there are times when skidded turns are inevitable and the sidecut was a little too hooky for that.

I also hit Snowbird on one of the deepest days of the year and put the Mission’s to the test in the deep pow. The Bird had yet to open Mineral Basin after a 30-inch, 3-day storm cycle and I was itching to hit it with the Missions. Off the tram, the Cirque was a mix of untracked and sloppy seconds. The Missions plowed through the sloppies and hopped through tight rocks with ease.

Heading back to the summit, I was a little late for the opening of Mineral Basin proper, but hit it just in time to bomb huge arcs through the leftover pow. I felt I could let them loose in the cut up pow just like I could on the groomers and the skis stayed stable and nimble.

The ultimate powder test was when I waited for the Bookends Traverse to open with waist-deep untracked lines from top-to-bottom. Dropping into my deepest turns of the year, I felt I could power the Missions and float just enough to maintain the proper speed. The 90mm width was great overall, but I think the Scott P4’s might have been an even better choice in these conditions. But, again, once back into the cut up crud and then to the groomers, the Missions showed their versatility.

Just a couple of comments… To add more float, Scott could do the Missions in a 186cm length instead of 183cm. And, the Missions are a pretty forgiving ski. They will kick you in the backseat if you’re not on top of them–don’t get me wrong. But, if you do get in the backseat, they are still maneuverable and easily allow you to get back on top of it without losing much control.

The Bottom Line on the Scott Mission 183’s

As a do-it-all ski, it’s hard to find any flaws with the Scott Mission 183’s. They arc a perfect turn on the groomers, plow through crud and float in the powder. There’s not much more you could ask for in a “one ski quiver” in my book. I dig the stylie graphics and the overall construction quality is superb. There will be days you’ll want something fatter like the Scott P4, but most days you’ll be stoked you’re bombing the groomers and charging the pow on the do-it-all Missions.

NOTE: For your reference, I’m 5-feet 11-inches and weigh 180 lbs. I am a powder skier first and foremost and I love to bomb groomers. I spend as little time as possible in the terrain park and avoid moguls if at all possible. I grew up skiing Cascade Cement in Washington State, but have been converted to Utah’s mountains and snow and have three years of teaching experience at The Canyons Resort from 1997-2000.