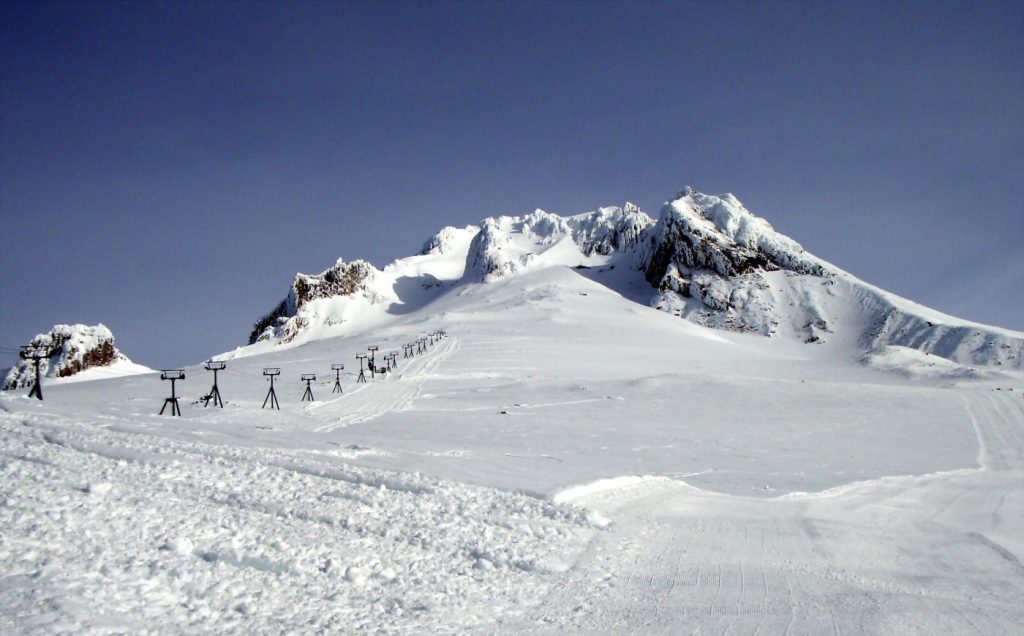 A Youthful Roadtrip to Mt. Hood for Summertime Jibbing

Kyle’s mom didn’t want us taking the Dung Beetle, so we ended up driving my car anyway. After all, the Rodeo was sexier than that old blue mini-van, and Kyle’s stinky feet had gained the van its not-so-sexy nickname. I should have known that Kyle would bring his feet with him on this trip, too.

Kyle Dempster of Cottonwood High, our buddy Chris Headquist(Olympus High grad), and I had decided to skip out on a little school and a little work to launch a long weekend road trip to Mt. Hood, Oregon, to pick up a little October skiing.

Kyle’s a junior and a member of the Snowbird Mogul Team. He’s best known on the team as Butt Boy. It’s not because of his sweet backside, but because he jumped the gap that spans Highway 210 as it winds past the Snowbird parking lot and came up five feet short and slammed his rump into the pavement. Oh joy, Butt boy! On January 16th Kyle took second place at The Canyons Big Air with a switch 360. He stuck his landings clean, though, and thus failed to live up to the Butt Boy title. “I’m not sure I like Butt Boy,” Kyle remarks introspectively as we begin to talk about the trip. “I’d rather win a gold medal someday and be known world-wide as Kyle ‘Big Air’ Butt Boy!”

He can talk about his nickname all he wants, but Chris and I had been watching the ski movie 13 more than we probably should have, and we were jonesing to ski, not talk. With the weather the way it was, though, the mountains in Utah were more suitable for an afternoon picnic than a session in the terrain park. Load up the truck, we’re leaving for the Northwest – stinky feet and all.

Day 2: From Salt Lake to the Blue Mountains to Mt. Hood. We Huck.

I first met Kyle in the parking lot of Timberline Ski Resort at Mt. Hood this last summer. He and cohort Chris had taken a short week-and-a-half hiatus from their usual climbing regime to raid Mt. Hood, the only place within 14 hours of driving that was still prepping four halfpipes and countless tabletops every day in June. In October, however, we were lucky to have two soggy tabletops and a small halfpipe.

We decided, for maximum ski time, to leave on a Thursday evening, pull an all-nighter, and show up at Mt. Hood just in time to buy lift tickets for Friday. I should have known that things were going to take a bad turn when we pulled out of Salt Lake and Kyle said, “Whoa – something’s shaking and it don’t feel good.” “No big deal,” I said confidently. “My car’s been doing that for three weeks now and I haven’t had a problem yet.” Yeah – famous last words. Kyle and Chris believed me, or they pretended to. In any case, we weren’t about to call off the trip now, so we put in a Lagwagon CD and kept going.

Except for a few ridiculously cold pit stops in the Blue Mountains of Oregon, and except for some bad-smelling feet, we made it to Mt. Hood without any trouble on Friday morning. The energy level in the car leaped higher and higher as we approached the resort. Memories from the previous summer and expectations for the days ahead gave us perma-grin like never before. Even though it was thickly overcast, we were confident that as we climbed up in altitude we would end up above the cloud-cover, basking in the sun and able to look down on the clouds like looking onto a woolly carpet. Tough luck, dump truck. As we rode up the lift, we ended up in the middle of the clouds themselves, damp from the mist. Did we really care? No way. It was mid-October and we were skiing.

We beat ourselves up for a few hours over-rotating backflips, under-rotating 720s, and not quite sticking our 540s.

For being warm and wet, the snow there was surprisingly hard – rock hard. We didn’t seem to notice. Hour after hour we hucked ourselves off those tabletops, sometimes sticking it to the landing transition – oftentimes not. We beat ourselves up for a few hours over-rotating backflips, under-rotating 720s, and not quite sticking our 540s. The half cab 180 grabs were clean. Somehow we lasted the rest of the day, riding until the last chair, then retreated to Portland for pizza and some crazy freestyle walking downtown.

Day 3: The Driveshaft, the Rain, and the Oldsmoboat

As we drove away from the Tualatin Pizza Hut, the Rodeo’s little shimmy-shimmy wasn’t so little anymore. I could barely hold the steering wheel, and even yelling at each other wasn’t enough to hear. As I accelerated through a light, the driveshaft blew under the car, clanged around like a dinner bell, then went silent. The car slowed to a stop. “Game over,” Chris said. I felt sick. “We should have taken the Dung Beetle,” I said. Kyle’s first comment: “This is the perfect excuse for us to stay longer!”

We stayed longer. My bro Kendall’s sister lived a short ways away, and she came to the rescue in the pouring rain. That night my parents came down from Seattle and loaned us the Oldsmoboat. It treated us just fine, but Chris’s favorite joke was, “Hey, Brig. This is not your father’s Oldsmobile. Um, is it?” Man, he said that over and over! Though it never really got sunny the rest of that weekend, we had some great rainy sessions in the halfpipe when everything came together. Kyle’s clean mute grabs, cute snowboarder girls, and Puerto Rican tourists pulling out their camcorders to watch us and screaming, “Vaya, pana! Vete de aqui pa’ Hollywood!”

The fact is, skiers and snowboarders are a weird breed. We think about riding way more than we should. Who knows if it’s really healthy for us or not? I believe it is, and you ask any other kid at your school who does it and he or she will probably tell you the same. Sure, you could land on your head and die. Sure, you could hit a tree and die. Or, you could sit on the couch, eat potato chips, and die. Don’t get me wrong – it’s idiotic to blindly huck yourself, flail, and cream into someone else or just cream yourself. But there’s a thick core of skiers and riders who sit next to you every day in class and don’t pay attention to hardly a thing. If you ask them at any given moment what they’re thinking about, if they’re honest they’ll confess, “misty flips,” or “lincoln loops.” Wouldn’t you like to be like that, too? Get a trusty Dung Beetle, some friends, and you can be.

Here’s a few of your bros and sisters and what their doing.

Tanner Hall: Winter School in Park City, 10th grade, Snowbird Mogul Team. Stars in movies such as 13 and Degenerates. Skiing Magazine voted him the best skier too young to get into an R-rated movie. January 9th he beat out the big boys such as Shane McConkie, Mike Douglas, Josh Loubek, and even yours truly at the Whistler Superfly Slopestyle. He rips.

Kyle Dempster: Cottonwood High School, Member of the Snowbird Mogul Team. Drives the Dung Beetle only on special occasions, and can usually be found in his Subaru Wagon, “Colonel Mustard.”

Mitch Lemmons: Indian Hills Middle School, 9th grade, Snowbird Mogul Team. “Mitch is incredible. He’s got talent like I can’t believe. He has a real good presence in the air and helps push the envelope when we’re skiing together.” -Kyle Dempster. “Mitch reminds me of Scrappy-Doo.” –BGG.