With a slew of hot skis in Atomic’s ski lineup, one of the newest members of the line gets a complete makeover for 2008/2009. The Snoop Daddy, when introduced two seasons ago, was considered relatively fat for a do-it-all ski. Since that time, waist widths have expanded considerably, thus leaving the Snoop in the dust.

Add on top of that all the twin-tips in this category and it further limited the draw of the Snoop Daddy. So, for this year, Atomic essentially went back to the drawing board and is releasing an entirely-new Snoop Daddy with more girth, a laminated wood core, traditional sandwich sidewall construction and then added the versatility of a turned-up tail. 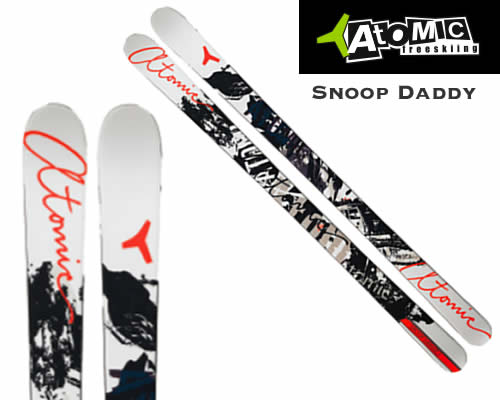 About the 2008 Atomic Snoop Daddy

Ditching the Beta 4 core and pseudo-cap construction, the all-new Atomic Snoop Daddy is now a more traditional ski build with fatter dimensions and a turned-up tail. Last year’s dimensions were 127/88/113 and this year, they have been beefed up to a more versatile 129/94/118. Though still not the fattest ski on the market, these are now a much more versatile for both inbounds and backcountry turns.

In the West–and especially here in Utah–100mm is the new 80mm when it comes to waist widths. The new Snoop Daddy comes pretty close to that mark, so it will float really well and still carve the groomers with it’s solid sidecut and traditional construction.

The new Snoop should be relatively light and snappy and it’s dimensions are skin-friendly, so it could be a solid backcountry ski. Or, if jibbing in the park or off natural features is your thing, the Snoop’s twin-tips should pay you back in spades.

Here’s the word from Atomic:

For 08/09 we completely reworked the Snoop Daddy to make it a true freeride weapon. We beefed up the waist width and changed the construction to wood core sandwich sidewall. We also added a turned up tail giving this ski the ability to go switch. This is the one ski from Atomic that can literally do it all.