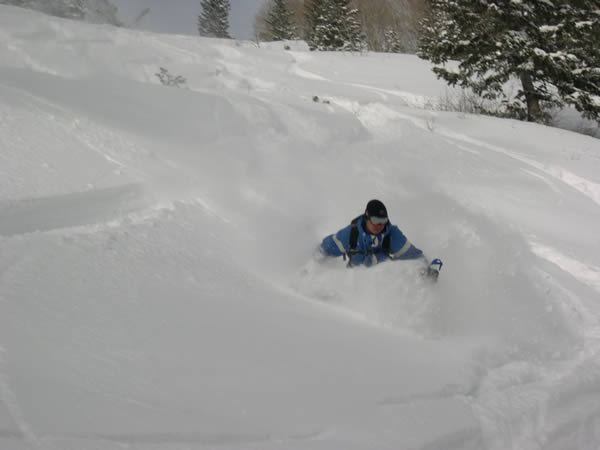 The snowpack this year has been, well, unstable to say the least. Anything that can slide already has at least once, if not twice all on it’s own. Many, typically tantalizing slopes are so sketchy it almost makes me sick to my stomach.

On New Year’s Day, Kendall Card and I ventured into the South Backcountry just outside of The Canyons Resort. What was a routine trip into the backcountry ended up being a lesson in how dangerous the backcountry can be.

9:00 AM: Saddleback and Toombstone Lifts Kendall and I hooked up with The Canyons photographer, Erik Seo to shoot some pics while the 9990 Lift was closed for avie work. We ducked into The Pines off of Saddleback for two laps of freshies, then onto Toombstone. We ducked into the trees just to the skier’s left of Another World for two more laps of untracked, knee-deep pow. We could hardly believe that nobody followed us after our first run, but midway through the second run, a group of snowboarders caught our scent and quickly devoured our stash.

After those runs on Toombstone, we hunkered down in the line for 9990. We ended up waiting for over an hour before we got a chance to ride on the swings.

Once the lift opened, it was sheer pandemonium as everyone pushed and shoved their way in line and everyone just packed onto the lift with whoever was next to them. There are no friends on powder days and my lift ride up was quiet since nobody seemed to know each other.

We made one nonstop lap before returning to the Fantasy Ridge area for a round of photos. Once the pow was all tracked out, it was time for Kendall and I to hit the BC towards Duches Draw. This area consists of the south facing bowl off of 9990 Peak and continuing south to the top of Duches Draw. To access this area, there’s a 300 ft. bootpack from the top of the 9990 Express Lift which accesses the actual summit of 9990 Peak. The backcountry gate allows you to either head north towards Squaretop or south towards Duches Draw.

In recent years, more and more people have been venturing into the backcountry — most of them unprepared for backcountry travel. Sadly, beacons, shovels, probes and common sense are rareities.

After skiing down to the saddle between 9990 and Duches, we load the skis into our packs and begin up the bootpack to the summit. While climbing, we noticed how many people were making that trek and mostly that we were the only ones with proper backcountry gear.

On top of that, everyone seemed to be oblivious to the fact that they were venturing into a very unstable snowpack with many typically dangerous slopes.

I noticed a particular couple who caught my attention as being obviously unprepared. She was a telemarker and he was on alpine equipment straight ouf of 1985. They oozed of stupidity. Kendall and I reached the summit and began pulling our packs off. I immediately noticed that the bootpack went right over a 10 foot cornice, so I diverted the bootpack away from that. “What knuckleheads…” I thought. On top of that, there were two snowboarders parked atop the cornice just hanging out. I said they should not be just sitting on top of the cornice and mentioned they should sit elsewhere… They basically told me to f*** off.

Right after that, Kendall’s cell phone rings, it’s Rich Lambert, a good friend of ours.

He asked if we were ok because the entire southeast face of Duches just released. Kendall looked down and saw the aforementioned man hiking back up to the ridge and his girlfriend narrowly escaping the wrath of the slide. This guy (I’ll call him Dimwit), gets to the top and starts freaking out.

“Holy s***, I’ve never been so scared in my life. I almost got taken out by that avalanche!”

He then approached us and said, “where should I ski?” 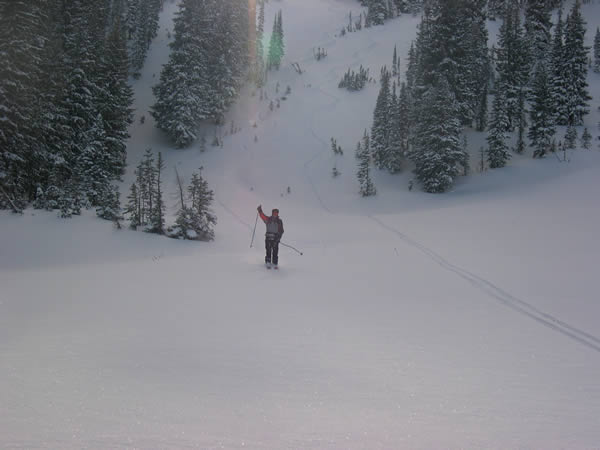 Kendall responded, “you shouldn’t… you should turn right back around and hike out of here. This is no place for you to be risking your life or the lives of others.”

Dimwit then scoffs and says, “I think I’ll ski here (pointing to the line just to skier’s right of the slidepath), what do you think?”

I then tell him, “I wouldn’t if I were you. Don’t tempt fate twice in one day.”

He pretty much gets all huffy, then asks us where we were skiing and Kendall responds, “As far away from you as possible, you’re a danger to everyone around you.”

He then gets pretty upset as I try to explain to him that the last thing we want to do is pull him off this mountain in a bodybag. He didn’t listen to either of us and dropped right in just to the right of the slide path.

Kendall and I continued on the ridge towards Easter Bowl and the safety of trees. We performed two ski cuts, then dug a hasty pit. We found about 18 inches of pow on top of about a foot of granular — perfect little ball-bearing sized pellets. SKETCHY!!!

We skied down near the trees one at a time, spotting each other as we skied. Honestly, I was pretty scared and so was Kendall. We were careful to stop only in safe zones and get the heck out of there. When we got to the bottom of Duches Draw, I snapped some shots of the slide. It ripped HUGE! I was spooked big time. I’ve skied that line only once and it sloughed enough to keep me from wanting to ski it ever again. Now, that was sealed… I won’t be skiing that line ever again.

The rub with this whole experience is that so many of us are entering the backcountry with varying levels of experience. While others are going out there without a clue of the danger ahead. They think it’s Disneyland and all they want to do is ride the Matterhorn.

We all need to work on our backcountry skills: attend seminars, practice searching, reading books and mostly, using our brains. Avalanches are serious stuff and with increasing backcountry travel, more people are putting themselves in danger. Don’t become a victim.