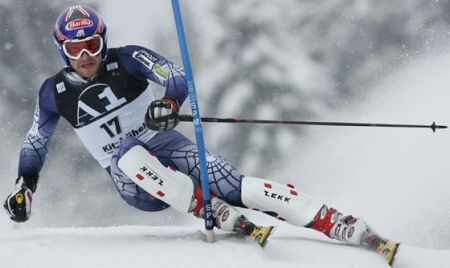 Two-time World Cup overall champion Bode Miller (Franconia, NH) was named Thursday to the U.S. Ski Team and will compete this coming season on the Audi FIS World Cup. Miller has skied independently the last two years, winning his second overall World Cup title in 2007-08. The U.S. Ski Team and Miller made the announcement in a joint press conference at the Staples Center in Los Angeles.

“Bode is committed to the Team and the Team looks forward to helping Bode achieve personal greatness,” Rearick said. “Because Bode is such a great competitor he’s going to challenge everyone on the Team to push their personal limits and strive for greater performances. I look forward to Bode being a positive team member and leader.

“Our men’s Team the last two years has grown into a close-knit family – we help each other be successful. Having proven veterans like Ted [Ligety], Marco [Sullivan], Steven [Nyman], Scott [Macartney] and Bode all training and racing together will help all of us. This is a group of strong leaders that Bode has trained and raced with throughout his career.”

“I am excited to be back with the guys and the Team. We’ve had great success together,” Miller said. “I look forward to taking advantage of the great program we have in place.”

The Team will begin working with Miller immediately. The four-time World Champion Miller did not set a return to competition date. He is not expected to compete in the Oct. 25 Audi FIS World Cup season opener in Soelden, Austria but is hopeful to be at the Visa Birds of Prey World Cup Dec. 2-6 in Beaver Creek, CO.