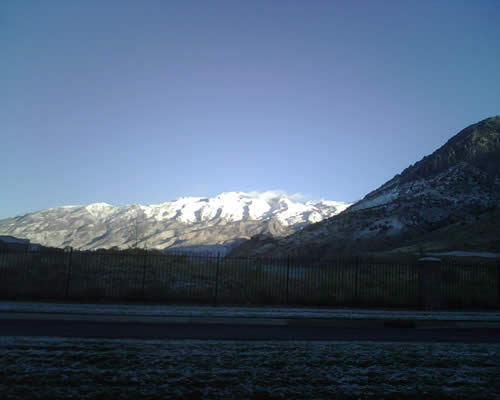 Last night, we received the first measurable snowfall at the mouth of American Fork Canyon. It was coming down hard with flakes the size of dinner plates. Talking with Kendall, he said he was heading up for some turns in the morning–his first of the season. Look for a full trip report soon.

On my way to the office, I snapped this photo of Lone Peak and the rest of the southern ridge line of Little Cottonwood Canyon. We’ve had a few storms so far this season, but this one was the first to truly reach all the way to the valley floor.

Then, when I booted up my laptop, a friend of mine had forwarded me a YouTube video of the sickest powder skiing at Alta and the nearby backcountry I’ve ever seen. The footie is from WPP and looks to be from last season, but it was so deep and bottomless that it seems hard to believe. Apparently, this short film won some awards… maybe for the sickiest powdeah of the year award or something. I don’t know if that award exists, but this vid should get it. Check it out.

It’s definitely time to unpack the skis and be ready for the next dawn patrol. It won’t be to long before we’re skinning up untracked lines at 6:00 am in Little or Big Cottonwood Canyon. I can’t wait…

ShareTweet
Previous ArticleTour of Utah Back for 2008
Next Article Utah Ski Resorts: Updates for This Season