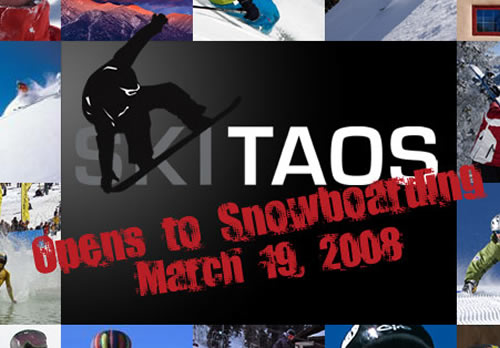 Cold War Over? Taos to Allow Snowboarding in 2008

What do I think about this?

Really, I’m not shocked at this announcement. Taos is the only real ski resort in the desert southwest. They have a limited local draw and their destination skier totals have dwindled recently. However, Taos is one of those cool family-owned organizations with enough grit to tough things out. They will be better off for allowing snowboarders–financially and in overall marketability. Hopefully it helps them grow and become more successful overall–I’m sure it will.

Alta and Deer Valley are the last two major players still holding out, with Mad River Glen being the only Eastern holdout. The likelihood that Deer Valley and Alta open their slopes to one-plankers remains pretty slim. With 8 other killer resorts within 1 hour drive from Salt Lake International Airport that DO embrace the park rat crowd, there’s really no need. Taos, on the other hand, was destined to buckle. So, Utah boarders, don’t get your hopes up because the Cold War with Taos has ended… Alta and Deer Valley will hold on to their no snowboarding policy for years to come.

I will have a personal moment of silence at the top of Alta’s Supreme Chair on March 19, 2008. Anyone else care to join me?

Here’s the official announcement from Taos:

Taos, NM., December 14, 2007 — Burton can take one of five areas off its poaching list—Taos’ management has decided to reverse a long-standing ban on snowboarding, effective March 19.

“While there are many reasons why we have chosen this season to make such a significant change to our company’s policy the foremost factor is we feel simply that it is time,” says Alejandro Blake, who adds that, “For several seasons the debate has been more directed as to “when” rather than “if” snowboarding would be permitted at Taos Ski Valley.”

Resort management adds that, “it has been the opinion of the Blake Family and TSV’s management that the timing was critical. Let us emphasize that this decision is the result of careful planning and consideration. We recognize many challenges that will result from this decision but feel ultimately it will benefit Taos Ski Valley, Inc., its employees and the

ShareTweet
ski resorts taos
Previous ArticleAltimeter Watches 101: Why Should You Have One?
Next Article HippieTech Mountain Bike Suspension Tuning and Repair