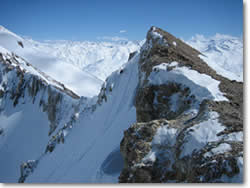 It´s almost an oxymoron to think too much snow. In a place like Las Lenas during a record season such as this, sometimes too much of a good thing can be bad. Luckily for us, our timing was just right. After waiting for a few days to get the Marte chair dug out from the recent storm (two lift towers were completely buried at one point!), we settled for some moderate hiking above the Caris lift. 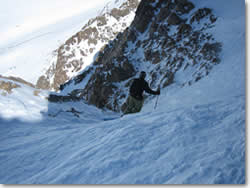 As we rounded the corner, our crew just gasped. ¨Holy Cow.¨ There were no other words that could describe the majestic draw of the Marte chutes. The entire drawl of Frankie´s was enough to elicit the moistest of drool from the Tahoe dudes. ´oh, they just gotta get Marte open!` they sighed. But like a fine aged wine, before they could sample the goods, a taste was in order. Hercules opened up before us with knee deep fresh snow and a simmering ray of light. Ron and Kate hopped in first, and immediately approving cheers resonated through the valley. The previous day`s 36’hours of traveling seemed to vanish in the reiging moment. Joy had been so kind to staple these huge grins upon our faces. 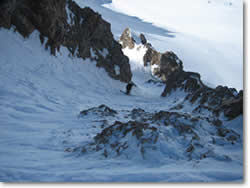 The next day, it was on. Marte had opened for the first time in over three weeks and the gringos were hungry. We feasted on first tracks into Frankie´s, scooped up the wind-blown powder inside Vegas, and laced up the boots for an adventurous trek up Cerro Martin. We continued to exercise caution as the avalanche danger was still rated high. Sluffs were prominent and managing them became key. A few choice descents were aborted, but we managed to claim our share of the top grade Andes powder. The magic was back. It was another day of ´getting infermo´at Leñas Land. 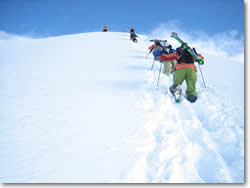 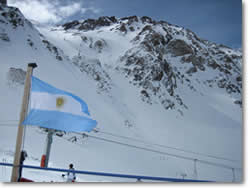 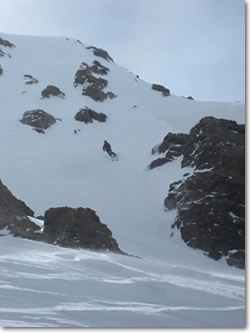 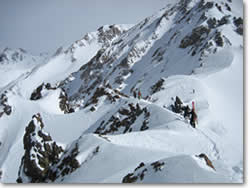