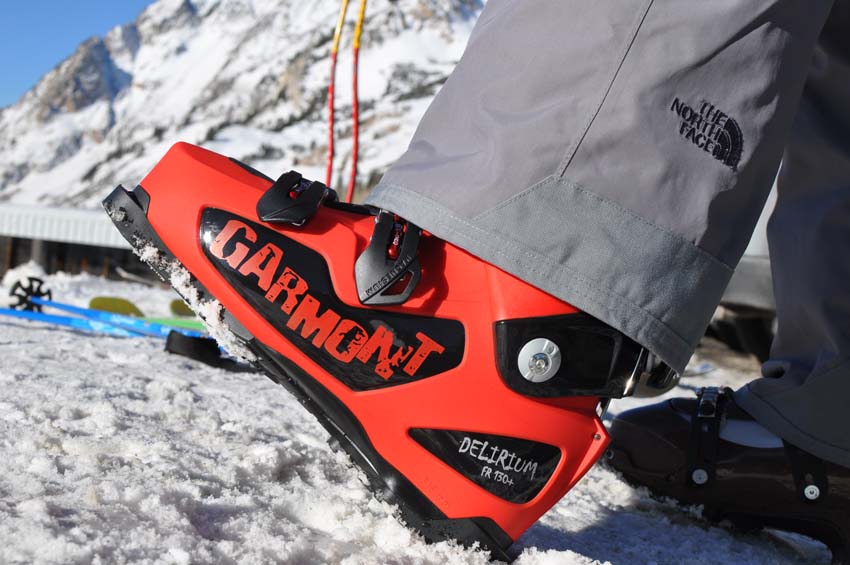 As more and more skiers are venturing into the backcountry, the spectrum of touring-friendly ski boots has expanded. Last year, Garmont launched two new boots on each end of the spectrum: the ultralight Masterlite and the ultra-beefy Delirium. The Delirium is pure modern muscle car with no-holds-barred power combined with a comfortable fit — perfect for sidecountry skiers or for those who don’t mind the extra girth for extra power.

NOTE: Garmont’s ski boots were sold to Scott Sports and this same boot is now the Scott Delirium. It’s a great boot that I still use extensively today. 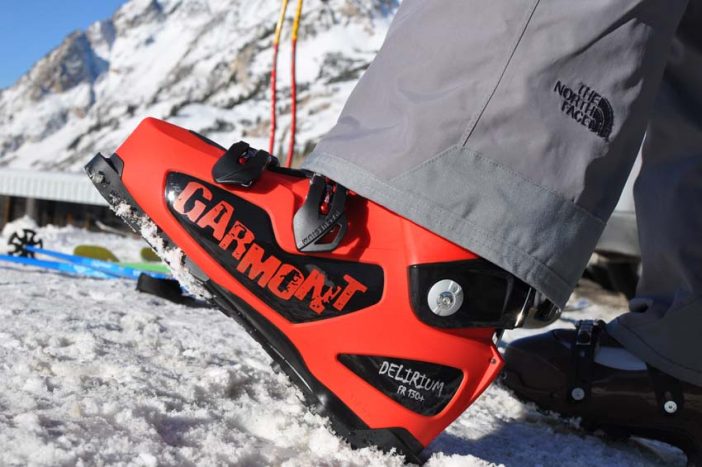 The ever-expanding backcountry market has many segments and the Delirium aims for the no-compromise chargers who don’t want to give up one lick of alpine performance while earning their turns. The resulting package provides serious firepower for steep, technical and variable backcountry terrain. As a byproduct of that, they also ski extremely well on the frontside.

When I tried on the Delirium, my first impression was just how roomy the toe box was. In fact, it ends up looking more like a pair of Frankenstein boots — squared off and wide. The anatomical shell is pre-punched to accomodate most trouble areas and affords the most wiggle room of any boot in its class. Wider feet will appreciate the extra room, but normal feet will have to take up some of that volume with thicker socks.

After trimming a pair of Superfeet Red Hot insoles, I then slipped my feet inside for an extended test run. After about 30 minutes of indoor wear, I had no pressure points and was impressed with the overall comfort — it was time for some turns. 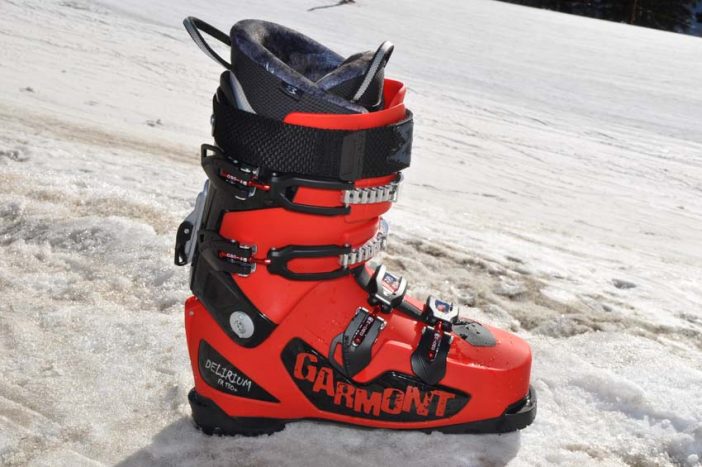 My first turns were frontside carving at Alta. It was early January and the coverage was still poor, so we were limited to bombing the groomers.  With a pair of Surface Walk Free skis and alpine bindings, it took me very little time to get comfortable with the Delirium’s performance. Their lateral stiffness provides instant power transfer and the stiff, progressive flex pattern can easily drive any ski. While my insistence on skiing race boots faded long ago, I still can’t ride a mushy boot. My 5’11”, 175 lb. frame can flex these perfectly. Yes, they are stiff, but they aren’t race-stiff — I’d say they are perfect for mixed frontside/backcountry use. 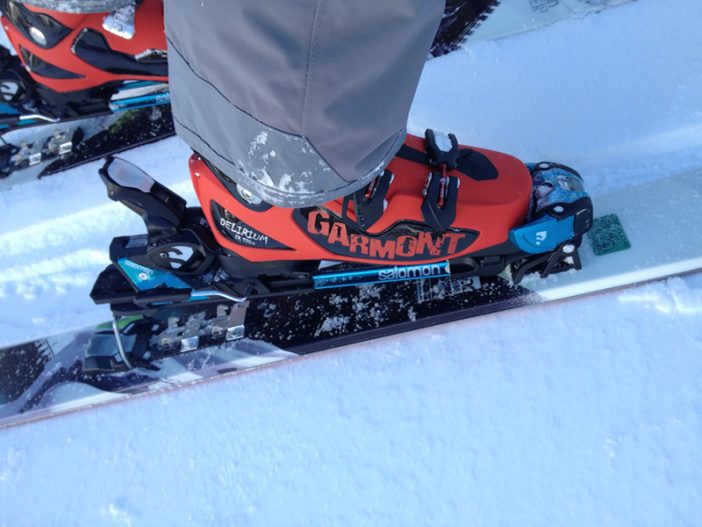 Further displaying the expanded capability of the Delirium, I also used them to test out the new Salomon Guardian 16’s with mounted to the 2013 Salomon Rocker 2 115 skis. With that perfect sidecountry setup, the Delirium’s felt in their element. I was also able to test them on a quick ascent from the Watson Shelter for my first taste of how they will tour — no problems whatsoever.

Rounding out the equipment match-making exercise, I then skied them with Dynafit TLT Radical ST bindings on a pair of Surface Walk Free skis. After the trifecta of ski and binding options under my belt, I can appreciate the power and versatility of this boot both inbounds and in the backcountry and I think you will too.

Focusing now on the ascent, the Delirium’s walk well, but aren’t anything to gush over. Fore-aft flex is about as expected from these boots and is certainly sufficient for all but the longest of approaches. One nice feature of the two upper buckles is the built-in locking mechanism that keeps them in place while being unbuckled. This provides additional walkability when needed and prevents the buckles from dis-engaging. Getting back into ski mode is best done once once locked back into your skis, then leaning backwards. An audible click turns them from soft to burly so you know you’re ready. 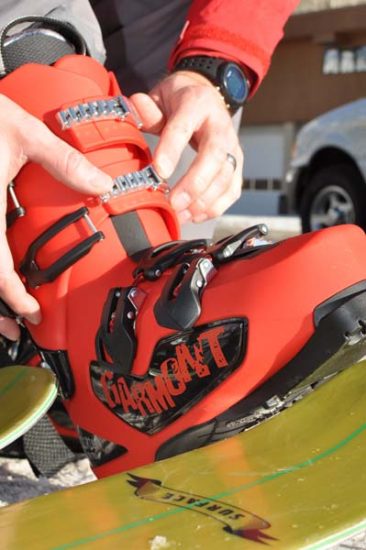 Not all was 100% rosy, so here are a few criticisms. In my opinion, swappable DIN and A/T soles are unnecessary. 9 times out of 10, you’ll choose the one you like and stick with it. I will say, however that changing the soles is the easiest of any swappable-sole boots I’ve ever tried. So, perhaps they have made it so easy that changing soles could be a viable feature.

I also appreciated the extra wiggle room in the toebox, but did have to wear thicker socks than usual. As I’ve worn these boots more and more, I’ve come to appreciate the wider toebox in the same way that I appreciate a little extra wiggle room in my running shoes. The rest of the boot hugs my lower leg and foot perfectly, but having the ability to wiggle and spread out my toes is actually refreshing as compared to most of the race-stock boots I’ve squeezed my piggies into over the years.

As I’ve walked around resorts, I have also noticed that the DIN soles are very, very slippery. Typical DIN soles have rubber on the heel that will provide a little extra grip. These don’t have any of that and can turn wet floors into an ice rink.

The Delirium has become my inbounds and sidecountry boot of  choice in concert with Fritschi Freeride Pro bindings. It’s a great combination for power on the groomers with sufficient walkability and comfort for backcountry tours.

Burly indeed, the  Scott Delirium takes the cake as the burliest touring boots I’ve tested. They are also super-versatile and should be considered as the “one boot to rule them all”. If you insist on stiff, capable boots and can only choose one pair for all your skiing needs, the Delirium is a phenomenal choice that will work with any binding platform on the market.

The Scott Delirium ski boots are burly, yet comfortable boots for frontside and backside performance. Touring in the Delirium's is also great as they walk really well. As a one boot quiver, these are hard to beat.