“Wow… that’s a HUGE bull elk!” we all clamor as we make our first official sighting of the night. “There’s not just one HUGE bull elk, but there’s 5 or 6 of them on either side of Highway 40. Little did we know at the time that the rampant wildlife (deer, elk, foxes and rabbits) would all combine to provide 2 straight hours of white knuckle, “is that a deer?” driving. After a close call with a stubborn cow elk just outside of Craig, we arrived in Steamboat, Colorado, home of Steamboat Powdercats—one of the finest snowcat operations in the USA!

It had been over 10 days since the last storm, so the mood was a bit somber. Just a few weeks prior to this trip, both Utah’s Wasatch and the Colorado Rockies were getting pounded with the white stuff. But, after 10 days, the Wasatch was hurting for freshies—we could only imagine that the terrain around Steamboat would be in the same boat.

Hooking up with the crew at Steamboat Powdercats, we quickly realize that this is a first-class operation. Their offices are in a prime location near the base of the resort in Ski Time Square. Having stayed at the Steamboat Grand Hotel the night before, we just walked across the street.

Greeting us at the office was Kent Vertrees, the man with the plan. His infectious smile and stoke assured us that the newly-opened Level III terrain would deliver the goods in spite of the lack of recent snowfall. We then meet our guides for the day (Eric, Mason and Todd), then hook up with the crew of college buddies from the University of Colorado who would become the 6th Man—our group for the day. 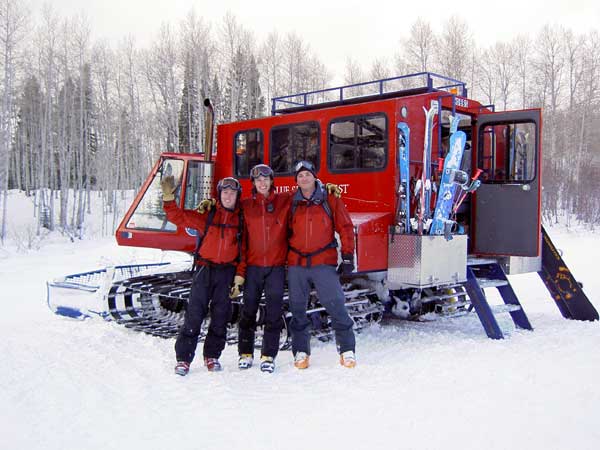 The terrain used by Steamboat Powdercats is located in the Routt – Medicine Bow National Forest and consists of a number of ridgelines filled with relatively short but steep shots. The terrain doesn’t feature many picture-perfect, wide-open bowls, but what it does have is nicely-spaced tree runs that keep the powder fresh weeks after a storm.

Like many operations, they are beginning to rub shoulders with the ever-growing masses of snowmobilers. Steamboat Powdercats lays down the roads and some snowmobilers take advantage of their generosity and treat them like highways in the backcountry. Luckily, we didn’t see too many of our two-stroke buddies. Kent mentioned to me that the National Forest is considering banning snowmobilers from certain parts of their usable terrain. I know that if this happens, the guests will have a better experience and will enjoy safer runs without the threat of snowmobilers “high marking” or otherwise causing safety concerns. Now back to the goods… 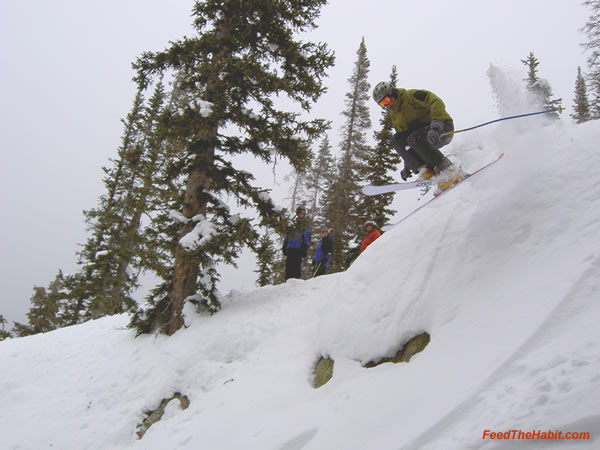 Out of the gate, Kendall and I felt like outsiders as college jokes and conversation turned to topics only they would understand. But, that all quickly changed the second we hit our first run—we were all skiing powder! POWDER… 10 days after a storm? Yes, powder it was, but with a hefty layer of surface hoar. “Loud powder,” as our lead guide, Eric would point out. Loud powder or not, there was powder to be had in these mountains and we were stoked to be there.

The first two “warm up” runs were in South Soda Creek Canyon that’s known locally as “Bitch Creek.” With a name like that, we had to inquire as to how that came about. Well, apparently a crabby old lady used to backcountry ski in the area—maybe she still does. As the snowmobilers crept into her terrain, she would yell at them. I can imagine her saying things like, “you boys get the hell out of my powder stash!” They say on clear mornings, if the wind blows just right, you might hear a few four-letter words from the tops of the trees. Well… back to the real story. 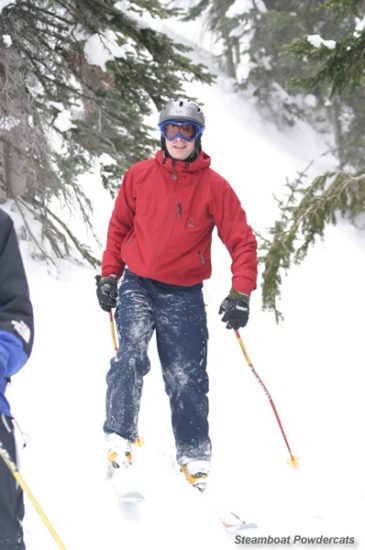 South Soda Creek Canyon is defined by open tree shots with northeast, east and west-facing aspects (primarily north). This area, as well as all areas we skied, is littered with rocks and all sorts of fun terrain features to keep you on your toes. One thing we noticed with Steamboat Powdercats that was different from other operations was their willingness to lead us to rocks and airs. They knew our abilities and allowed us to decide which lines to ski.

Every snowcat operation we’ve visited has featured super-friendly and knowledgeable guides—well, Eric proved to be even more than that, he was so full of stories and jokes that he kept us entertained during every cat ride.

The next few runs were had in the Pepsi area, which was once again gladed with rock drops of 5’ – 25’ everywhere with plentiful powder pockets. We knew we were in for a treat when Eric busted out some common lingo like “goodies.” He was always leading is to the “goodies,” or untracked powder stashes of delight. 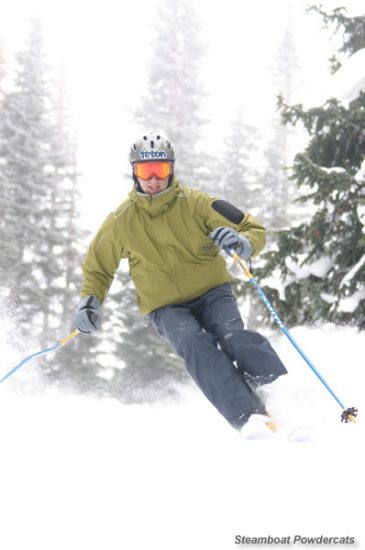 After getting our fill in the Pepsi area, we returned to Lower Bitch Creek where we skied a handful of lines with super-sick, dreamy powder as the sun peaked out from behind the clouds that had kept the day gloomy and overcast. Just as we pulled up to the start zone that had everyone salivating like kids in a candy store, Kendall says, “I’ll ski down a bit and take some photos.” Nice move man!

Kendall parked it for some photos (which never materialized by the way) after skiing some of the best turns of the day. We all busted down Bonsai Face with big, arcing turns and little rock drops galore—totally stoked and grins from ear to ear.

As we approached the cat, we all knew that could’ve been our last run, but the guides pulled out one more treat—the bonus run! YEAH BABY! The final run of the day would consist of untracked powder through aspens and finally down an untracked gulley. What a way to add the final touches to a great day of cat skiing. 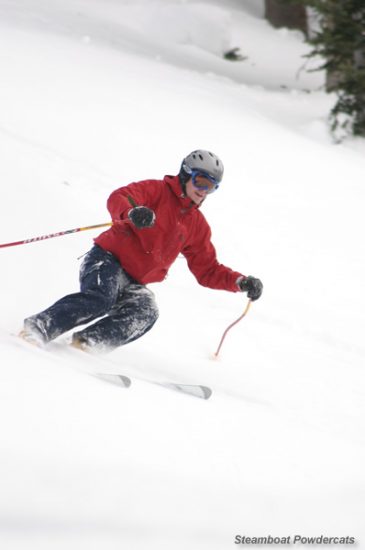 We loaded up the cat and made our way back to the parking lot, the sunset streaked red and orange across the sky. Our guides, Eric, Todd and Mason all said that most groups don’t get the bonus run. It was then that the 6th Man Award went to the CU Buffs for being such a stellar group for the day.

Honestly, the day went much better than expected—with untracked powder to be had all over the place. Considering how long it had been since the last storm, we are confident that Steamboat Powdercats can deliver powder for your next snowcat vacation.