First reason, these seem to be among the most popular POV cameras. Second reason, I’ve already reviewed both the GoPro HD and ContourHD so was familiar with their use and quirks (I’ve included links to my previous reviews below in the section on “Biases”). Third, I thought this review might fill a niche. There are already are a lot of reviews of the GoPro HD and the Contour HD, some good and some bad but most generic. What is lacking are reviews focused on these point of view (POV) cameras for the snowsport enthusiast. Snowsports in the Coastal British Columbia region is a particularly demanding laboratory with our heavy snowfalls, dark gloomy winters, and challenging light conditions.

The Vholdr ContourHD 1080 and GoPro HD are relatively cost-effective, robust POV cameras. There’s little to choose between them in terms of video quality; both are good. Both are subsceptible to producing jerky video, however, jerkiness can be minimized by using the cameras in appropriate conditions and with appropriate mounts. The ContourHD has a slight edge in useability but the GoProHD will be more resistant to inclement weather. As far as costs go, GoPro HD’s MSRP is $299 USD; the ContourHD 1080’s MSRP is $330 (ContourHD is $299).

For snowsports both cameras have well thought-out mounts. Non-helmet wearers skiing deep powder might find the ContourHD’s goggle mount to be preferable as that mount is located high and won’t be coated in pow. Helmet – wearers and those who ski in shallow powder or hardpack will find little to choose between the GoPro and ContourHD in terms of mounts and useability – practically speaking, the ContourHD’s goggle and helmet mounts are at least as good as the GoPro’s helmet and chest mounts. From a pure fashion sense the ContourHD’s form factor is sleeker and less obstrusive then the toaster-like GoPro worn on the head. Using the GoPro chest mount remedies this fashion faux pas.

To summarize, both the ContourHD and GoPro HD are compelling POV offerings. Compact, self-contained, very configurable, excellent quality video and decent sound. There’s very little to choose between them and what you pick will depend in large part on individual user quirks and what kind of use you’ll have for them.

I am relatively new to videos, only having started shooting and editing videos this year. I have no aspirations to produce professional quality videos – my efforts are limited to short snippets uploaded to the web via Vimeo and the Vholdr.com site. I have little interest in video post-processing and limit my efforts to merging raw clips together and sometimes adding text and soundtrack. My videos mainly showcase skiing and biking in the Southwestern British Columbia, Canada area. Although I’ve tried to pay attention to concerns that “prosumer” videographers may have, the comments in this review will reflect my biases.

I have provided many video clips as sample output. PLEASE READ THE COMMENTS ABOUT THE VIDEOS (click the Vimeo links to see them in HD and/or to read the comments) which outlined how I rendered and presented the videos. You can process video output to preserve as much quality as possible (larger files say for file-sharing via DVD) or like I did, you can process the videos to present pretty decent quality while managing file sizes for video-sharing via web.

If you want even more details about POV Camera functionality and more technical information here are some older reviews of the GoPro and ContourHD authored by myself.

There’s a lot of literature about the GoPro HD on the manufacturer’s website and in various articles (see citations above). Suffice it to say that the GoPro is easy to use. There’s a button to turn it on. There’s another button to record. There’s a LCD with cryptic displays but the well-written GoPro manual explains everything in detail. Ideally you should configure all your settings (eg. time, date) when you’ve got the manual in front of you. You would then be well advised to remember how to change the resolutions so you can change resolutions in the field if you like (resolution settings are also printed on the back of the GoPro). Here’s some other observations about the GoPro specific to skiing:

There’s very good product literature for the ContourHD 1080 on the Vholdr site and a nice review in a article by pointofviewcameras comparing the ContourHD 1080 with the older ContourHD. The ContourHD is another paragon of functional simplicity. There’s two buttons on the outside; an on-off button and a slider to turn recording on/off. Once you open a rubber cover, you can also access a Hi/Lo switch which you can set (using the provided EasyEdit software) to record at different resolutions. Here’s a grab-bag of comments about the ContourHD 1080 for skiing.

GoPro informed me that the headband mount wasn’t ideal for skiing. This makes sense as it’s hard to make the headband mount stable. Instead they recommended the chest mount and the helmet mount. Despite GoPro’s advice I thought I would experiment and used the GoPro HD chest, helmet and head-band mount (note that the GoPro Hero mounts and GoPro HD mounts are interchangeable). 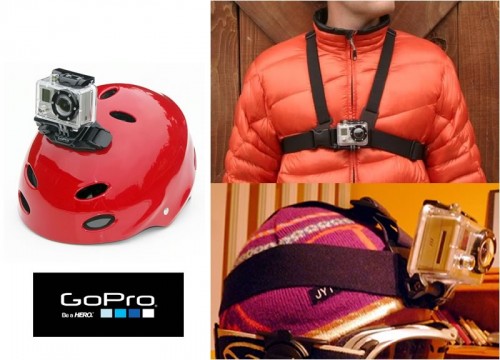 This video showcases the GoPro chest and helmet mounts.

Vholdr Contour HD
Not to belabour a point but GoPro’s mounts were radically superior to the ContourHD’s mounting options for biking. This is not true for skiing where both companies have their mounts dialed. For my personal use as a non-helmet wearer, I would have to give a slight edge to the Vholdr ContourHD’s goggle mount. 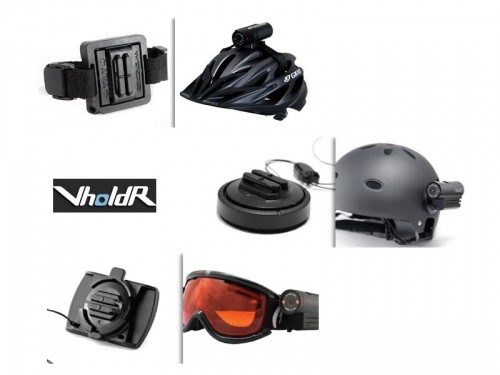 This video was filmed with the ContourHD on the goggle mount.

There’s not much to choose from in this regard. Both the ContourHD 1080 and GoPro HD produce pretty good video. Each camera lets you choose various shooting High-definitions and Standard definition formats (1080p, 960p, 720p @ 60 fps, 720p @ 30 fps and standard definition) with the GoPro having field-configurable settings. Both cameras also have decent microphones although wind-noise is present when skiing at speed.

This is the GoPro HD Camera: Ski Movie from GoPro on Vimeo – sample shows how the video can be presented without being too shaky with tightly worn chest-mount straps and a pole-mount!

This video compares the older ContourHD (goggle mount forwards) with the GoPro HD (chest mount). Sound is presented “as is”.

I’ll look into both these cameras more beyond these initial impressions and will update this article as I resolve questions. Some possible follow-ups might be as follows: