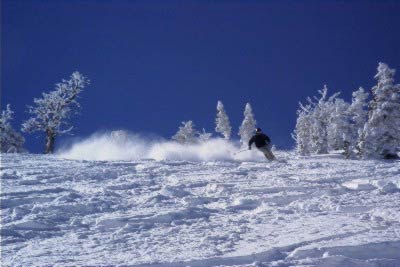 Powder Week and Kendall Skis 40,000 Vertical in One Day

That is a day I’ll remember for a long time. The days leading up to the 7th had been filled with unreal April powder in record book quantities. It had been a bit on the heavy side for Utah, although the Northwest Skier in me was digging every minute of it. Each day that week started with the courtesy appearance at the office and then me slipping out just shy of 9am. The only way I’d be caught was if someone heard the swishing of my ski pants as I disappeared out the office door. The great escape…yea, the week of April 2-7, 2001 was the great escape.

Monday and Tuesday: The Canyons

Monday and Tuesday were spent at The Canyons, my home hill. I was farming stashes in the trees off Peak 5 both days. It appeared that winter had returned, in full force. Locals were coming out of the woodwork. People who had put up thier sticks and boards were quickly repenting and heading for the lifts.

Wednesday was a pilgrimage to Alta, powder capital of the free world. Actually, I think it is powder capital of the whole world. My ski partner Bryan and I did a couple laps each on Wildcat and The Germ and then like homing pigeons, zeroed in on Supreme. Heavy snowing and poor visibility deemed it necessary to seek the trees and rocks of Supreme.

Just prior to heading to Supreme, we stopped at Watson’s so Bryan could de-fog the goggles. I was leaning on my poles outside just watching people come and go. One little girl and her dad skied up to the hut and took off thier skis. It was obvious that the daughter was not having the best day of her life. Frustrated and betwixt by all the new and falling snow, she desperately explained to her dad that she couldn’t turn in “all this powder” and that it was “too hard.” Her dad bent down and in a soft and fatherly voice said, “Honey, I know it’s hard but just keep at it and you’ll get it. You’ll even learn to love it.”

Bryan emerged and we were off to Supreme, but the words of a father would linger with me for the days to come.Lap after lap, we dove down the various chutes off the Supreme traverse. On the lift we’d spy lines and row-sham-bo over which one to take next. It got silly enough that we were planning two, even three runs in advance. With zero lift lines, our runs stacked up faster than I’ve ever had them stack up on Supreme. The knee to thigh deep pow turned me into a cliff seeking missile. I was jumping almost everything in site. Toward the end of our day we were stoked to get a couple runs in with two of Alta’s finest men in red who showed us right where the goods were, which weren’t always this side of the ropes. 20,000+ vert and 19 runs, including a last run down Alf’s, and we had just had “an Alta Day.” You’ll know one when it happens.

Thursday I was back to The Canyons. The day started with an 8am gondola ride for first tracks with some VIP’s. I was fortunate enough to grab 4 of the stronger skiing VIP’s and we dove in to the trees off Peak 5 for our warm up. Then it was up 9990 for an emergence from the clouds to a blue bird morning on some of Utah’s finest, untracked of course. At approx. 11:00 I dropped off the VIP’s at the top of the gondola and headed out to show Susan Riefer, a Skiing Magazine writer, around our mountain. Back up the 90 and out the north side we found what Susan called some of her best turns off the year.

Friday started with the courtesy appearance once again and then off to ski with Susan. She wanted to find some treats, and Peak 5 delivered about 14 inches of new freshies. Susan had the itch to ski Dreamscape, but it had been closed for a week. A couple phone calls later and we met a friendly lift maintenace worker at the base, snowmobile and all. Two runs of untracked and solitary powder were ours. The dream had come true: to ski untracked pow on your own private mountain. It was a phenominal day. One I didn’t expect to top in a long time. That was until Saturday.

It snowed heavy all Friday and into the night. The weather service had issued a storm warning for Saturday and into Sunday. We had received over 5′ of snow in 5 days. What couldn’t get any better did.

We pulled up to the gate on the North side just as a patroller was opening the upper traverse gate. Chase and Brad stopped and yelled up to the patroller asking if they could dive in. He nodded in approval just as I arrived to the gate so I submarined under Mr. Roper and got the first track down North side 90.

Saturday dawned with me making the second gondola car. I had with me my brand new AK Rockets from Salomon. I had been patiently waiting their arrival and right on cue they had made it Friday afternoon. I also had some goggles in my pack for Chase which I had promised him a while back. I had seen the shape his current ones were in so I thought I’d surprise him with some schwag. I knew Chase was in the first gondola car, so I’d catch him on the hill. I didn’t catch him until the top of 9990 where he was stashing his pack.

These goggles were from Version, a new snowboard line which looked like a pair of fighter pilot goggles. He laughed a bit and then donned the gogs. We immediately dove into the lift line and down Fright Face. It was more light pow face. There was at least 24″ new of Utah’s finest on top of the previous days snow. I had a good feeling about the day. Chase and Brad were bombing down lines faster than I was used to. They didn’t wait at the lift which didn’t surpise me. The next run I almost caught them but I was still a bit slow.

On the third pass I caught them and then spent the next couple hours bombing Dutches Draw, 94 Turns, Fantasy Ridge and the South side trees. “Not bad for a marketing guy,” Chase said on the 4th or 5th lift ride. I just smiled and replied, “Not bad for a dirtbag ski bum,” and we all laughed. The pow was the deepest I’d ever skied at The Canyons in five years. I was choking every turn. It was a true snorkle day and I was on some Rockets. I couldn’t imagine what it would have been like on the straight skinny sticks of yester-year. One would’ve looked like a mole burrowing through the landscape.

We pulled up to the gate on the North side just as a patroller was opening the upper traverse gate. Chase and Brad had stopped and yelled up to the patroller if they could dive in. He nodded in approval just as I arrived to the gate so I submarined under Mr. Roper and got the first track, down North side 90. Looking over to see Brad and Chase bombing down the open shots in the trees it looked like two white flashes. The North side was ours and ours alone.

After returning to the 90 I took another 5-6 runs with the Boys. The snow kept building up on our goggles, hats and coats. I had huge ice/snow chunks on my helmet and chin. Chase’s new goggles and gator were so piled up with snow all one could see were two little eye holes and a silly powder grin. He just kept laughing every time we arrived at the base of the lift. It was comical. People looked at us like we were freaks…cause we were. Powder freaks. I kept running into people I hadn’t seen in weeks, more evidence of the repentance that was taking place. Some tried to stop and chat, but there was no time for that.

I hooked up with Scottie for a few runs through the South Side trees. They were deeper than I ever remember those trees being. I then hooked up with Brig for a few hidden tree runs off Peak 5. On our third run at about 2pm, Brig convinced me to lawn dart off a cliff. “It looked awesome, just like a video” he would later assure me. It felt like hospitalization for certain when I landed a little in the back seat and my leg tried to bend at the top of my boot.

After 5 minutes or so I skied down to the lift and hoped back on for another run. It wasn’t pretty, but the pow was too deep and despite what I thought was a broken fibula, I had to keep skiing. We headed back to Red Pine for a bite to eat and a bit of rest for my legs. I had been watching my Suunto’s log book and saw that I was just shy of reaching 40,000 vert. Wet, tired and very much in pain, I went up Saddleback for another thousand vert which combined with the ski to the base would push me over the top. It was hideous pain and about the same visually. I’m not sure I enjoyed many of those turns on that last run. I somehow managed down and then skied on down to the base of the mountain.

I was done. Friends told me that Sunday was better than Saturday cause it kept snowing like mad. I was out for a couple weeks with bruised bones in my lower legs so Sunday was spent dreaming and recovering. I’m not sure when the next day will come that I can match or out do the 40,750′ vertical I skied that Saturday. One thing I do know is that it was undoubtedly the “Best Day of the Year! POWDER!” At least that’s what my day planner says.

Yep, people do go nuts about this stuff. Hope you got a chance to go nuts this past season.