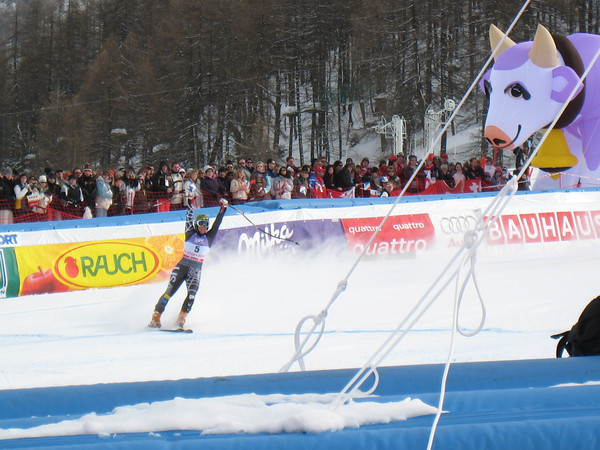 Hot on the heels of her win last week in the Super G, America’s Lindsey Vonn has swept the speed events at the World Championships at Val d’Isere, France. With her success, Vonn is definitely heading into next season as the frontrunner at the Vancouver Winter Olympics. – Editor

VAL d’ISERE, France (Feb. 9) – After collecting gold in the 2009 FIS World Championship super G last week, Lindsey Vonn (Vail, CO) stormed to another win in Monday’s downhill at Val d’Isere and was crowned the official queen of speed. Vonn clocked a 1:30.31 on the steep and technical course, while Swiss youngster Lara Gut was second, .52 seconds behind. It was the first U.S. women’s downhill title since Hilary Lindh won in 1997.

“I was hoping in these World Championships to win one gold medal. To win two is so unbelievable,” Vonn said. “I skied with my heart. It was an incredible day for me. I work so hard and I live for a day like today.”

The World Championship downhill was no exception as fresh snow in Val d’Isere delayed the women’s start, originally scheduled for Sunday. In addition to the overtly challenging technical components of the hill, which Vonn called the most demanding on the women’s circuit, the delay added another mental hurdle for racers to overcome. On Sunday, Women’s Head Coach Jim Tracy said the woman with the toughest mind would win the race.

“It was a tough day for me. I was really nervous. We’ve had two days off and I’ve been thinking about being disqualified in the super combined, but really getting excited about the downhill,” Vonn said. “I was nervous in the start but my husband was there and he got me calmed down and in the right mood for attacking. And that’s what I did.”

Vonn and her husband Thomas, who was also a World Cup racer for the U.S., are a special team in the ski racing world, as he travels along with her to help manage her time, equipment and in cases like Monday, to help Vonn through the mental challenges of racing.

“She was nervous, she specifically asked me to be in the start with her and she’s never done that before. I tried to keep my cool and keep her level, take away the hype of the race,” he said.

Striking the right balance of mental calm and furor, Vonn also held a slightly higher line from start to finish and perfectly executed the big carousel turns at key points in the race to win over Gut, who held the early lead for 15 racers. Prior to the race, Vonn knew she had a good feeling on her skis and was concentrating during training on executing her line to a tee.

“I fought the whole way down and I nailed the bottom section where it was really important to carry speed,” she said. 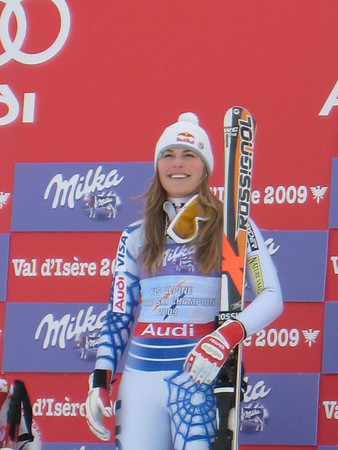 Performing well at marquee races like World Championships, Vonn said, is not only significant and rewarding in her own career, but also in creating excitement about ski racing.

“I don’t know if it’s going to change my life but I really hope that this helps create awareness. Even with the first gold medal here it’s creating a lot of excitement about skiing. And going into the Olympics, more people will be excited about the sport and that’s what I want to do. The more success we have will help people become more aware of the sport. I want people to know my sport is the best in the world,” Vonn said.

Another North American win in the men’s downhill by Canadian John Kucera on Saturday will add to the exposure, Vonn added.

“North Americans have a good heart and we fight really hard. And we’re always skiing for ourselves and have our own goals and motivations and just fight. We want to win as bad, or more, than anyone else,” she said.

With the pressure now totally off Vonn, she’ll turn her focus to upcoming technical events.

Stacey Cook (Mammoth, CA) finished the downhill in ninth place, which she said was a great confidence booster. Running early, she came through the finish nine tenths of a second in the lead.

“It felt good to come down in the lead at the World Champs. That was pretty special,” Cook said. “All I wanted to do at the top was execute my line and ski my plan and I think, considering how bad the year’s been so far, that it was a great achievement for me, to have a little bit of confidence in the start and be able to do what I wanted to do.”

“I came here and I was just having fun, I’ve been freesking a lot more than normal and just enjoying my time with my teammates and everyone and I think it’s transferring into skiing so I’ll just keep that going,” she said.