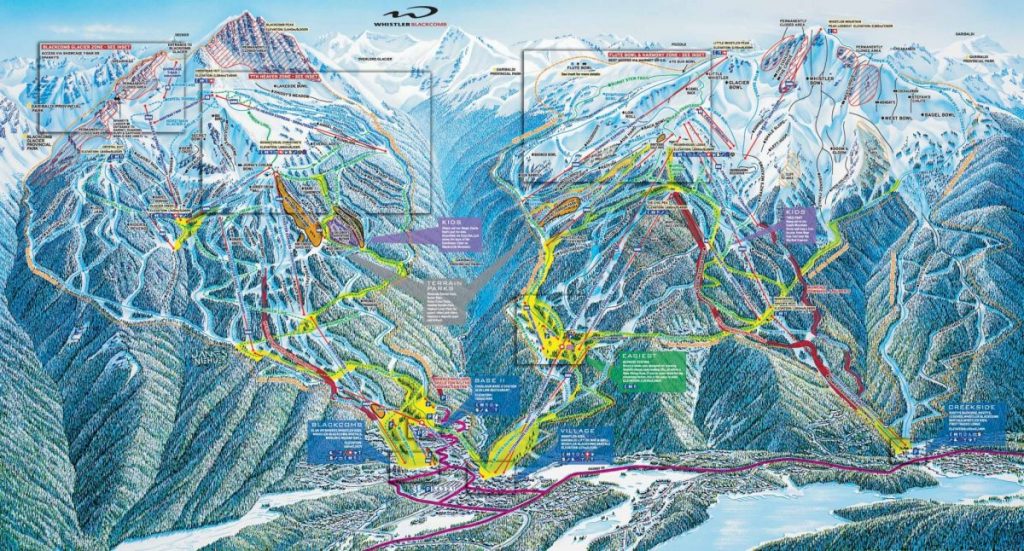 Looking for Mounties in Whistler-Blackcomb

We left our cozy beds in Seattle around 4 am to make it to Whistler in time to ski a full day. We blazed north through the early Saturday morning mist and fog. We kept telling ourselves, “Only two kinds of people wake up this early… fisherman and skiers.” We just so happen to be skiers in the truest sense of the word.

Growing up in the Northwest was a blessing from above. The rain never stops, so that means the snow doesn’t stop either. A core shot doesn’t exist in the Cascades, but they’re a dime a dozen in the fluffy pow pow of the Wasatch. Northwest skiing is a combination of heavy, wet snow, super-steep pitches, above-treeline bowls and hard-core skiers. This is home!

We pull into Whistler, then quickly check in at the pub to find out about the Superfly Slopestlye to be held the next day. They tell us the hits are somewhere in the Nintendo 64 Terrain Park, probably right next to Super Mario and his pal Luigi. But, if they told us where the tables were, they’d have to kill us. We figured they’d be pretty easy to find and opted to live to see another day.

I put myself in charge of filming the Slopestlye and let my lifelong bro, Brigham Graff do his trickery in the air. Brig sessioned while I bombed the fresh pow lying all over the place. All these jibbers overlooked the killer pow right next to the tables. After a few runs, I decided I needed to see the rest of what makes Blackcomb such a killer mountain. I left the jibbers for a little above-treeline ripping on the upper mountain.

With all the new snow, everywhere I went was a winner. From the top of 7th Heaven lift, I began my crusade to find out what makes this mountain so great. It didn’t take me long to realize that this mountain was HUGE, steep and challenging. I think it’s kind of like a Costco-sized Jackson Hole. I found plenty of wind-lips, rocks and steeps to keep me humble.

I caught up with Brig and we made our way over to what was once called Saudan Couloir, but is now called Coulior Extreme. You know, because we are “Extreme” skiers. At the cornice, I look ten feet to my right, to notice freeskiing goddess, Wendy Fisher, eyeing the competition taking place on skier’s left of us. “Hey, Wendy,” I ask–as if she should know me, “Is this section open to the public?”

“Yeah, this side is open to the public,” said Fisher. Then she busted downhill like a banshee.

We made our way down and watched Andrew Sheppard pull the sickest line off a 50+ footer, landing into a broom closet, then bombing huge turns. He then kept on going and pulled a huge mute grab off a rocky knoll.

Brig and I ripped it up the rest of the afternoon, taking a quick carrot cake break at the Horstman Hut before skiing the Saudan once more.

Blackcomb beats Jackson, Snowbird, Crystal and every other mountain I’d skied before.