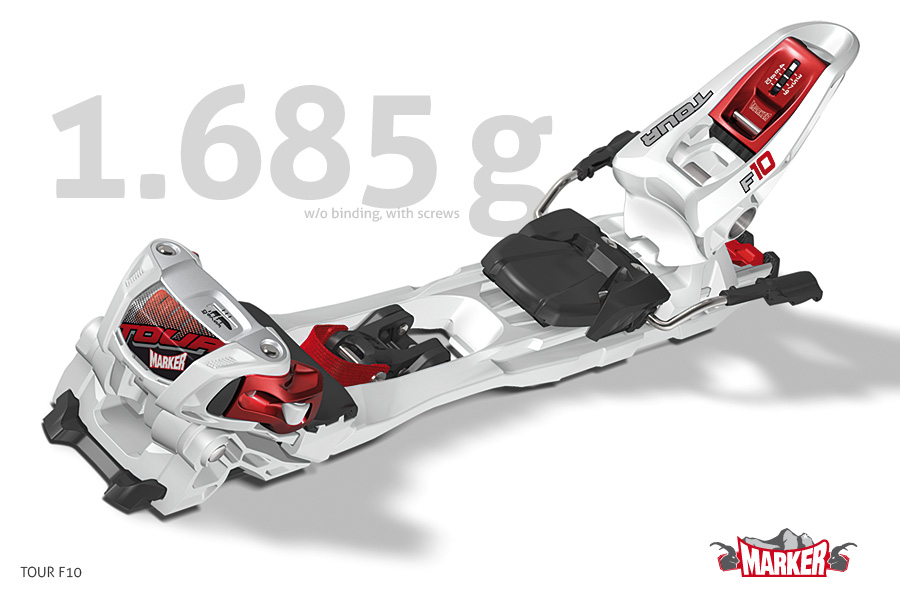 Could the new Marker Tour alpine-touring ski bindings really be the Fritschi-killer? It’s possible, yes indeed, but probable? Well, with Marker’s undeniably-huge market perception and the wild success of the Duke platform, there’s no way anyone at Fritschi can take this one sitting down.

Introducing the new Marker Tour alpine touring ski bindings that will be coming to ski shops near you, Fall 2010. Looking it over, the toepiece looks very similar, but better optimized for touring instead of stomping 50-footers. Other similarities exist between the tour and the Royal Family, but I’m sure materials completely differ, but at least the looks of them appear pretty similar.

I’m seeing some improvements in the heelpiece to reduce weight as well as a more adjustable climbing bar (definitely needed). What remains that is still a bit of a hassle is the requirement to click out of your bindings to switch between ski and tour modes. As well as the climbing bar, which seems difficult to adjust on-the-fly with a pole tip (since I haven’t seen them, this may not be the case, but it looks as such). Fritschi still hs ’em beat there.

But, the respectable fighting weight of 1690 grams (FT10) puts them a few hundred grams less than the Fritschi Freeride bindings. Expect these to hit the stores in the Fall… very impressive, Marker! 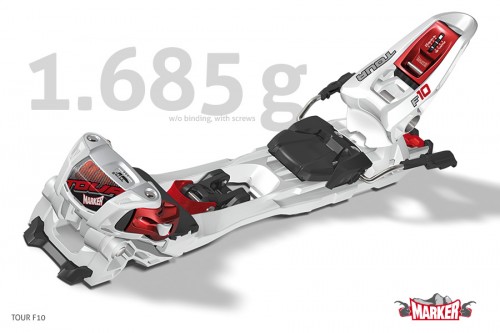 What Marker says about the Tour F10 and F12:

Focusing on producing the right binding for the end use that each skier needs has always been the Marker way. For the new Marker Tour bindings, our engineers set out to offer a binding for the skier who wants an all-day touring rig, but still wants great skiing performance. To date, in order to have light weight for climbing, the skier had to give up downhill skiing performance. Not any more. Built based on a 76mm minimum ski width, the innovative Marker Tour 12 and and Tour 10 bindings feature new, lighter weight Triple Pivot Compact toe, and Hollow Linkage heel components.

The new toe and heel sit atop a smooth-flexing frame design which features a new, glove-friendly release lever that puts the binding in touring mode. The gliding afd in the new toe is height adjustable, and designed specifically for AT boot soles, while also compatible with alpine boots. A weight-saving ‘hollow’ axle forms the pivot point in the heel. Its design is light weight, compact, and easy to step into, while the spring focuses energy directly toward the heel of the boot for optimum skiing performance. Weight for the Tour 10 is approximately 1690 grams/pair. Stand height is 34mm for the Tour 10 and Tour 12.