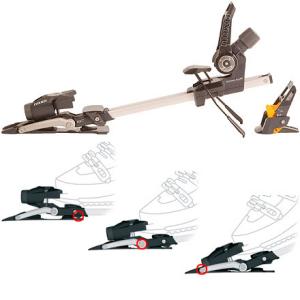 When the folks at Backcountry Access first came out with a hard-charging ski touring binding for big mountain alpine skiers looking to cross-over to earning their turns, I was stoked. I’ve always loved their backcountry gear and was very anxious to get them on the hill. After all – weren’t they the folks who brought us hard-line alpine skiers our first real alternative, the Alpine Trekker? I spouted to everyone who would listen that BCA’s Naxo binding was the binding to ride – and though the binding hit a few bumps its first year, it seems to have delivered on a stronger sophomore effort.

For those of you who don’t know already, the Naxo is the only alpine ski touring binding available with a downhill-style toe piece. It’s also the only touring binding with a triple-pivot point under the toe – created by having two hinges that allow for a “less-locked-in” feel during the stride. The Naxo’s pivot points create a stride that is downright buttery. Rarely have I felt as comfortable touring moderate-angle slopes as I do when using the Naxo. I mean, I know what it’s like to have a grin ear-to-ear after skiing a great downhill lap – but grinning while climbing? I admit – I caught myself more than once. It’s that good. Now, with that smooth gait I felt I had to give up a little on the “stomp up the steeps” factor (because the final pivot is farther out in front of the toe), but those are the trade-offs you make for a comfortable stride overall.

Now for what applies to most of us “cross-over” alpiners – the downhill performance. Can I ride the Naxo and feel confident that it will perform like my Salomons? I guess it depends on what you do on your Salomons, but I would say that for most skiers it will fit the bill solidly. I even took them to the resort this winter and hit some laps through the terrain park, landing several 5’s on them without a pre-release and without a single worry. They were rock-solid and unyielding. Three cheers for BCA! Would they be the binding for a 90-foot gap jump? Probably not. Grab some Alpine Trekkers for your Salomons if that’s your thing. Would they be the binding for aggressive dawn patrol laps in the Cottonwood Canyons to charge knee-deep turns with speed? Absolutely.

The 2006 Naxo nx01 binding has a few great features I’ve got to point out. First of all, it comes with a DIN that goes up to 12. If you need a touring binding that goes up to 13, BCA delivers once again with the even-brawnier Naxo nx21. Another thing – the Naxo’s 3-stage climbing elevator is also the burliest in the industry. This is a particular point of concern for those who have blown out the cheaper, softer plastic elevators on other big mountain touring bindings. There is no worry of that type of failure with the Naxo – it locks down with conviction and also gives a very stable platform while climbing. Third, the Naxo has two stabilizer bars underfoot, which gives an unwavering platform with increased torsional rigidity.

The Naxo also has a great little feature I love: tool-free length adjustment. It’s just a little lock-switch that you open, then slide to adjust, and then lock it back down. Genius! It’s one of those “why in the world didn’t somebody think of this sooner” sort of things. Its DIN setting is also tool-free – just twist to set. But I found it to be a little tough to twist and ended up just using a flat-head screwdriver. One last point – the elevator/lock-down mechanism closes in the upright position, not down against the tail of the ski. This is great news if you’ve ever fully flexed-out your ski and inadvertently unlocked to touring mode when using other bindings. That won’t happen with Naxo’s design. And that’s one of those things that reinforces what an innovative company BCA is: their relentless attention to details.

There’s one item I hope will be tweaked in a future version: the heel piece is not as smooth & easy to step into as most step-in bindings. Yes, it’s solid. Yes, it’s beefy. Don’t worry about that. I just found it to be a little awkward. I ended up setting the length 2mm shorter than my actual boot sole, and that seemed to make it easier for me.

So, hats off to BCA for putting out a great binding alternative for the hard-charging alpiner who earns his turns each morning before work. Like a German-engineered automobile, the Naxo pays attention to the details and you notice it on the mountain. Enjoy the ride.

Naxo bindings have now been discontinued from production. Search below for Fritschi bindings (the best alternative). – Ed.