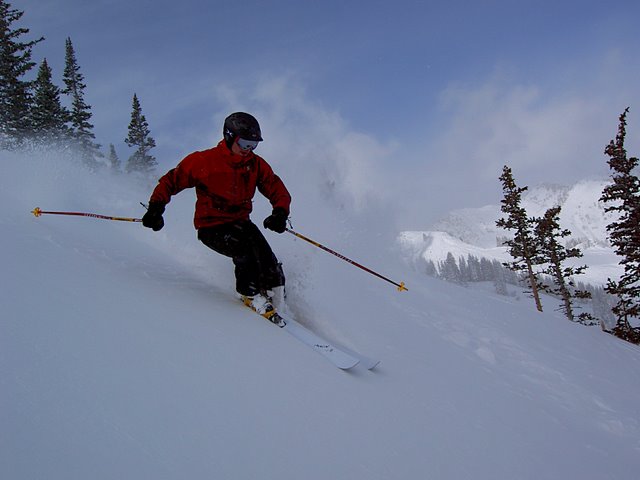 Nothing Better than Christmas Eve Powder at Alta

Since Alta’s opening on November 15, the storms were been hit-and-miss until December 2 when storm-after-storm began pounding the Wasatch Mountains. A quick look at the snowfall history chart at Alta reveals this upward tick in snowfall since the beginning of the month. Skiers are officially rejoicing at Alta by making deep powder turns to forget the November lull.

Gathering for Christmas Eve was myself, Kendall Card and Brig Graff–the old posse. After loading up on egg nog (love that stuff!), muffins and cinnamon rolls, we had our choice of Bluehouse Skis for the day. Brig opted for the Mavens and I was on a 2009 Maven prototype that’s a little narrower at 117mm in the waist, full tip/tail rocker and just a titch of camber.

With new sticks in hand, we made a B-line to Collins and were immediately on the traverse into West Rustler. The traverse is always a hoot with chocolate-chip rocks and barely-covered rocks, but I thought the coverage seemed pretty solid for this early in the season.  Dropping into sloppy seconds, I was stoked to be riding such a killer ski for the conditions.  Intermittent untracked was met with smooth carves and high-speed arcs from top-to-bottom.

After one more lap on West Rustler, it was time to drop into Greely. A short hike to Gunsight revealed nearly-untracked turns from top-to-bottom. One of the most fun runs on the mountain, we were rewarded with grin-inducing knee-deep turns–making us feel like rockstars.

For a little change of scenery, we opted for the Sugarloaf lift to see what we could find. With no lift line whatsoever, we zipped to the top in no time. Near the top, we quickly realized why the thin crowds–the wind was nuking with flesh-freezing fury. Once down from the ridge, winds were calm and we tucked underneath the lift for excellent turns and fun rock drops. Wide skis make for pillow-soft landings and can carve through anything. 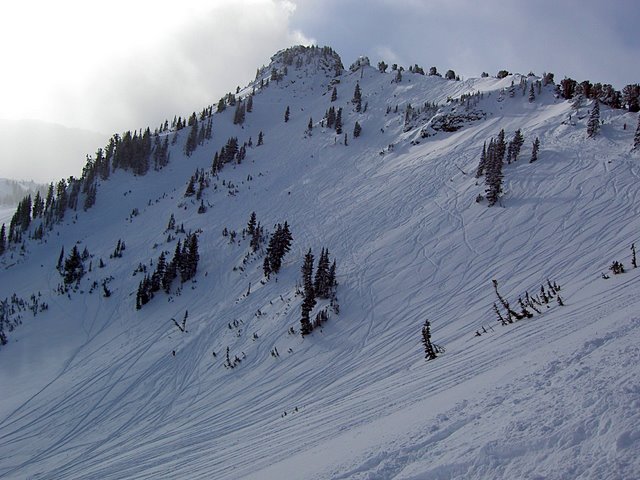 With the sketchy avalanche conditions right now in the Wasatch, Alta has been working extra-hard to ensure the safety of skiers. Some areas weren’t open and will only open once conditions are safe and all precautions are taken. Patient skiers will soon be rewarded to bottomless turns in Catherine’s, Ballroom, Devil’s Castle, but until then, there’s plenty of powder to be had elsewhere… you’ve just got to know your way around, but it’s there.

Here are the rest of the pics from the day: