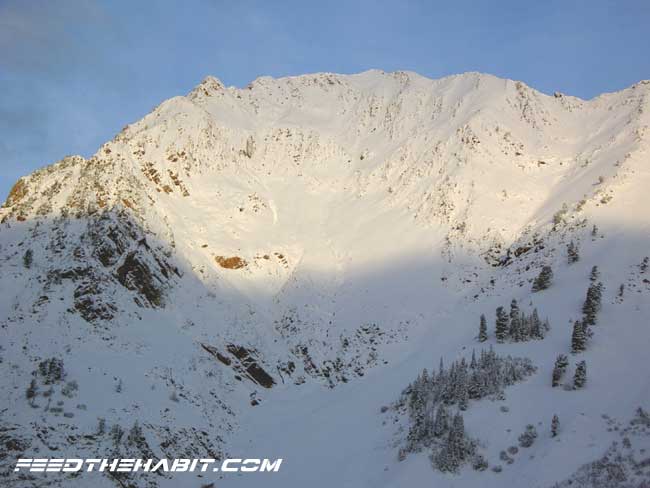 November 2004 Skiing in Utah… A November to Remember

The close of October found kids all over Utah preparing for tricks and treats, but it was Mother Nature who had a treat in store for the “older kids” of the Wasatch, a treat which would last well past the time of giving thanks. Utahans from the north in Logan to the south in Cedar City are indeed giving thanks, thanks that Mother Nature delivered the white treats in such abundance that November is proving to be what more than one skier is dubbing their most productive November ever.

With Southern Utah coming off of the most abundant November in memory where multiple storms deposited double-digit snow totals, Northern Utah is still basking in a solid and deeper than usual snowpack in the upper elevations and storms that have continued to yield fresh turns week after week.

We here at FeedTheHabit have taken advantage of this month to remember and are stoked to bring you a recap. Enjoy.

It all started with a solid storm in late October which caused a number of valley dwelling snow sliders to come out of the summer woodwork and descend upon Snowbird’s upper reaches. Rumors of knee deep powder and nary a core-shot was an infectious burst of hope to those wondering how long it would be until fall once again took hold of the Wasatch. The thing is, Mother Nature had other ideas and fall would be yielding to winter’s grasp. The upper cirque of Snowbird was in full swing, skin tracks on all sides and lines being laid down the middle. Amazingly it was tracked up almost as quickly as it accumulated. Skiers as far away as Seattle were making the trek to taste of the early season treats that Utah was enjoying. Jason was on hand to capture the bounty on film.

On an early dawn patrol during a short break between storms, Toledo Chute became the target. Long a wind loading catcher’s mitt for storms as they howl up Little Cottonwood Canyon, Toledo Chute had been my target for 2 years now. With a stable base and 6-12” of fresh powder, our trio of powder seekers set out for the entrance to Toledo. 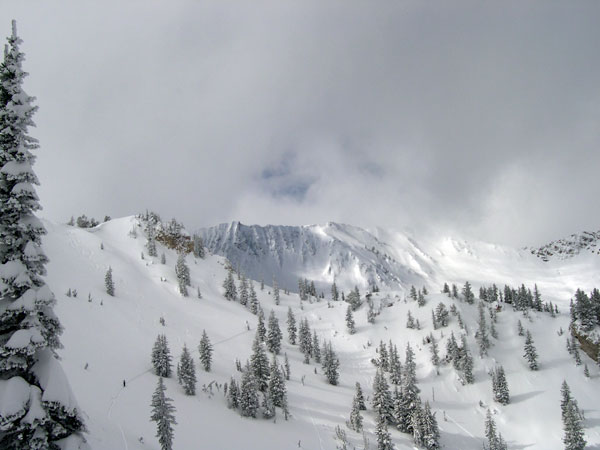 As it would work out, 2 companions and myself had a tremendous day bagging Toledo Chute and Holy Toledo, all the while catching mid-season glimpses of the Wasatch. We found ourselves scooping lines and wishing we had mid-season stamina.

Halloween was a stormy night, with accumulations of 12-18″ at Alta and other resorts. It wasn’t really a matter of if, but where we would earn our turns. With Atla closed to uphill traffic, we had our sights set on Cardiff Pass and possibly Toledo Bowl. Problem was, so did UDOT (Utah Department of Transportation) as they were shooting charges into Cardiff. New target: Flagstaff. 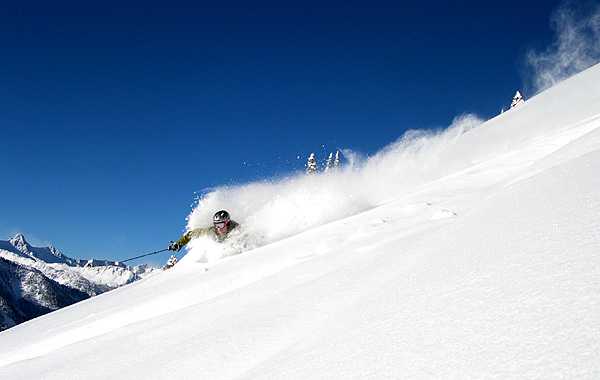 A high pressure had set in, melting out most lower elevation south facing slopes and the hopes and optimism of even the most die hard Utah contingent. But Mother Nature had other plans, arriving with a much needed breath of fresh air, and more fresh pow. Once again finding ourselves at the top of LCC early in the morning, we headed up Grizzly Gulch, being greeted with dust on bulletproof crust. With the gain in elevation the dust quickly turned to 2″, which turned to 4″, which turned to….until we would be turning in nearly 8-10″ of Utah’s finest dry reserve.

As Rich and I skinned along into the upper reaches of Twin Lakes Pass, out of nowhere like a stealth locomotive came Andrew McLean and a side-kick. “Thanks for breaking trail,” commented Andrew as we shared introductions and some skin trail chatter. This “legend” of the Wasatch is as nice as his reputation for skiing gnarly Wasatch chutes is big. We enjoyed a chance meeting in the backcountry, but the silence once again prevailed as Andrew and his friend Bob steamed on ahead into the mist that shrouded the upper summit of Patsy Marley.

Indeed we enjoyed a couple laps of fine powder on those upper slopes, but what I remember most from that day was the renew of getting back into the backcountry, to treasure the silence of the upper reaches of Little Cottonwwod Canyon, and the enjoyment of a chance encounter. Skinning up the final ridge between Wolverine and Patsy Marley, looking out into the valley below, feeling the cold wind and snow brushing accross my face. Ahh the backcountry, there’s nothing like it.

Epic. It’s a adjective by all sense of the word. But then again, it’s a verb when I’m thinking back to Timpanogos Tuesday. It’s certainly a tern that ‘s often used yet rarely understood. It certainly wasn’t what I was thinking when I got an e-mail that simply said – It’s on – Timpanogos, Grunge Coulior. 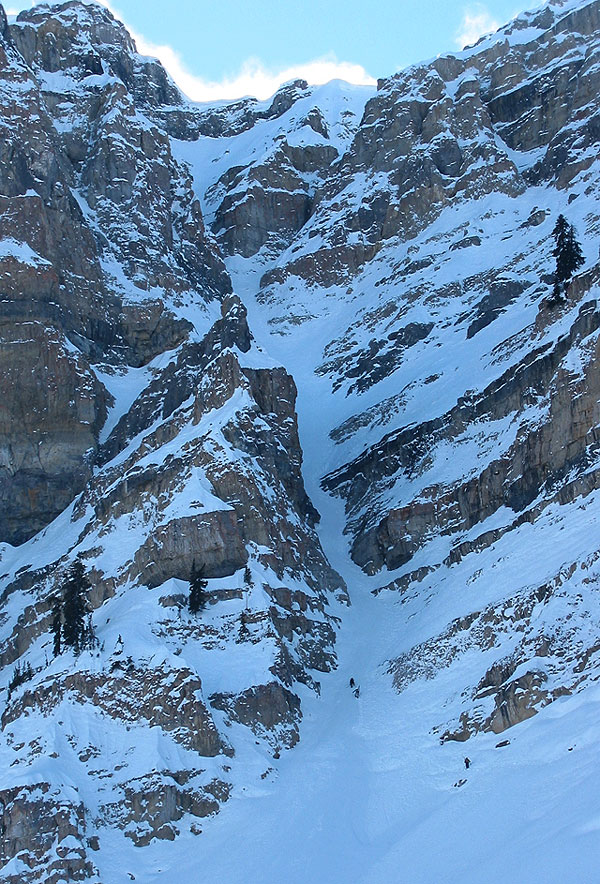 As the logistics came together, Derek and I would convince two others to tackle the Grunge Coulior with us, one of our freinds driving nearly 3 hours. With our companions, a couple of mountainbikes and a lot of enthusiasm we drove up American Fork Canyon on the north side of Timpanogos to reach the start of our epic adventure.

As consistent as carving the turkey on Thanksgiving, a crew of FeedTheHabit faithful and friends found themselves carving turns in 3-4″ of fresh powder in the feast before the feast. We’ve been blessed enough to once again build up our appetite by skinning and skiing in the Wasatch on Thanksgiving morning. 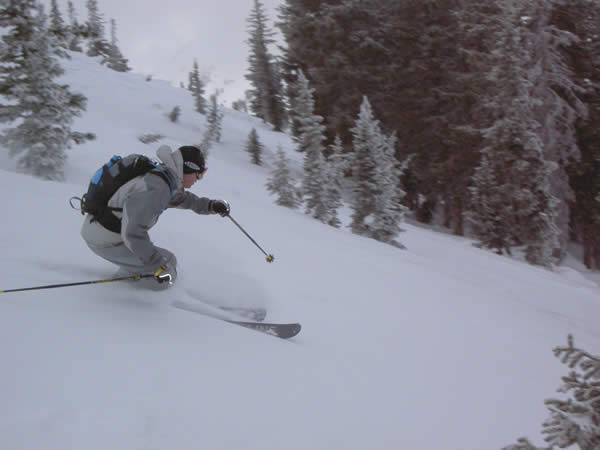 Having missed the annual Thanksgiving feast before the feast, it’s the day after Thanksgiving and I’m driving over Parley’s Summit for another dawn patrol in what looks to be the start of a bigtime winter storm. Indeed, by the time this one would kick-in with full strength, the Wasatch would be blanketed with 2-3 feet of the white goodness from above. Yep, Winter’s Back and Grizzly Gulch is my destination today. 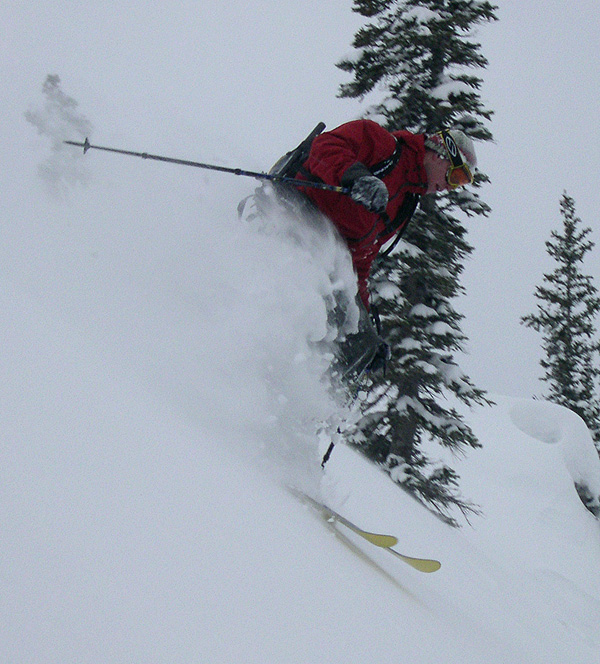