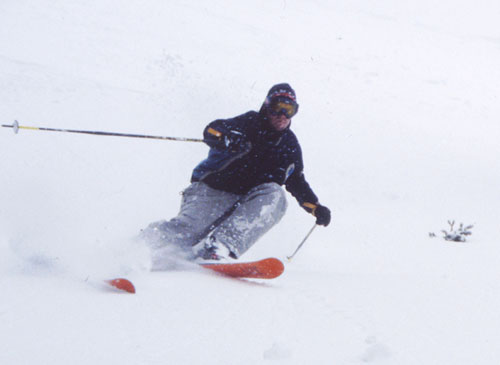 All right – for over 3 years I’ve wanted a ski like these. Ever since I first saw twintips in movies like Sick Sense and Degenerates, then in the pages of FREEZE, I knew that sooner or later all skis except for race and groomer skis would be twinned.

I wanted a twinned fat ski. If you’re living and riding anywhere west of Kansas, you need fat skis. If you’re any good, you want a twin. LINE was the first company to make a step in the right direction with the Ostness Dragon, and I personally don’t think anyone’s quite caught up with the same level of vision, innovation, and guts as LINE.

I took the Motherships up to The Canyons with some new snow and a bounteous backcountry of pow and windlips. I took the PocketRockets up to Snowbird with a few inches of fresh and some cliffs. After riding both of them in nearly ideal conditions, and really enjoying both, once again I’ll stand by LINE and put my money on the Motherships. Both Salomon and LINE finally made what I had dreamed about, but LINE hit it on the head.

Reason One: The Motherships have a better flex for riding in pow – the PocketRockets are way fun, but are better suited to the groomed for a lighter guy like me because they are stiffer. You don’t get the same smooth feeling off-piste as you do with the Motherships.

Reason Two: The Motherships are lighter-weight. It’s way easier to tweak out an air if you don’t feel like the skis are throwing you around.

Reason Three: It seems LINE makes all their twins with equal height in the tip and tail. The PocketRocket is that way, too, but it’s got a lower-profile. Combine that low-pro tip and tail with a stiffer flex, and you have a pow ski that dives a little more than I’d like. With the Motherships I stood tall in the saddle and straightlined a pow bowl SWITCH without a care in the world. And I did it more than once. Just hopped around 180 in the middle of a turn and let ’em run. I didn’t feel like the PocketRockets were quite as comfortable.

If you still don’t ride twins – you’ve gotta start this year. It won’t hurt you one bit (if you’re careful). And even if you never go switch, I doubt you’ll find a ski anywhere that is nearly as smooth in the pow as the LINE Motherships.