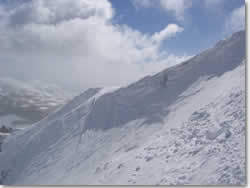 One Man’s Return to Jupiter… Peak That Is

March 1997 was my first time at the top of Jupiter Peak at Park City Mountain Resort. To get the to top of Jupiter Peak requires a ridgeline traverse followed by a good 20-minuted bootpack to the top. Before serious backcountry skiing became a part of me, I enjoyed hikeable terrain within the confines of ski resorts. Alta’s Catherine’s Area, Crystal Mountain’s North and South Backcountry and other hikeable terrain were my way of earning my own turns and getting more snow of the untracked kind.

After the short bootpack, I sat on the top of Jupiter Peak with a couple of good friends. We snapped a couple of pictures and I decided to drop the cornice entrance into what I found out later was a chute named “Machete’s”. I’m not sure if that’s just what the locals call it, but it’s a great name for it. That morning, the wind blew the new snowpack pretty hard… hard enough to create a thick breakable crust–but I didn’t even think about that, I was there to drop that line and ski Jupiter Peak for the first time.

Mid-air, I knew I needed to shed some speed, so I planned an immediate sweeping turn to skier’s left. Upon impact, my right ski plunged beneath the thick crust and before I knew it, that ski stopped dead in its tracks. The softest part of my body to absorb that immediate stop from 30 mph to 0 in a nanosecond was my poor little ACL. It stood no match for that kind of leverage. Kerrrrrrrrrrrrr-thwaaaaack! I felt my ACL wind up and snap in an instant, just like pulling a rubber band back and letting it go. There was no pain… just a wierd feeling in my gut and a warmth in my knee. 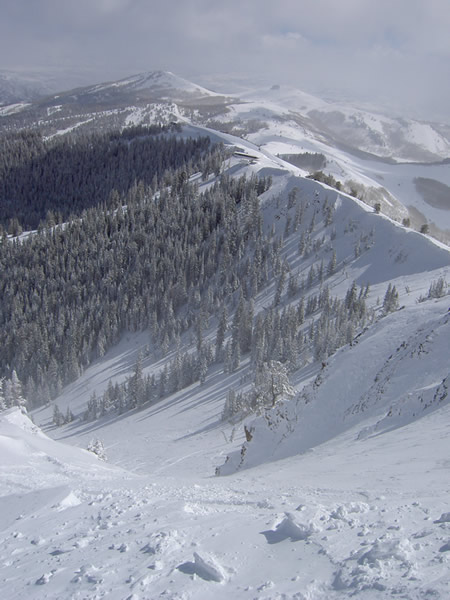 “You OK?” yelled Brigham from the ridgeline.

“Uhh… I think I messed up my knee, but it doesn’t feel too bad, so I’ll try to ski down,” I said. I then put weight on my right leg only to have it buckle like a wet noodle. Then I yelled back up to Brigham, “I can’t ski out, I think I blew out my knee.”

Luckily, just minutes later, a ski patroller showed up, dropped me a rope and I pulled myself back to the ridgeline and into an awaiting toboggan. I would “enjoy” the most vertical in a toboggan at Park City to date. It was one of those things that the patrollers had trained for, but never done for real.

I’m nine years older and nearly nine years into a repaired ACL. There’s a good eight inches of new snow on the ground and it’s a weekday. For some reason, McConkey’s Lift is shut down today, so the only access to Jupiter Peak is via the longer traverse from Jupiter Lift.

My goal… hike and ski Machete’s by myself for the first time since that fateful day in 1997. It’s just me and the mountain. Time to face those feelings and that spilt-second that changed my life.

The wind was howling and the skies were mixed sun and clouds. The traverse to the Peak was pretty lonely and I was one of only a handful of people to hit the bootpack to the top that day. The wind was cold… slapping me in the face just to test my mettle and drive. I would not be stopped, today was my day. 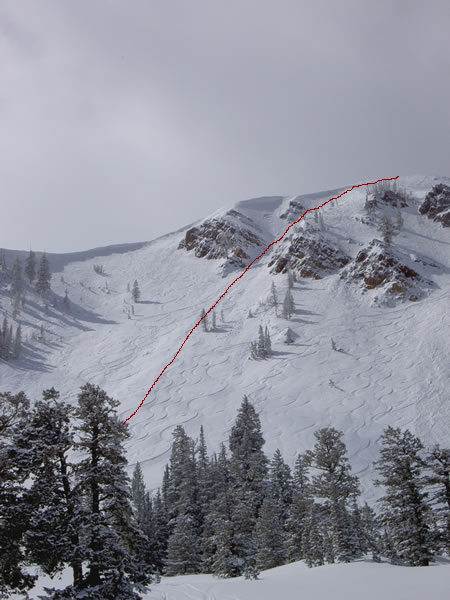 Getting closer and closer to the top, I start re-living that day almost exactly nine years before. At that time, I was in the middle of college and didn’t have a care in the world. Now, I’m well out of college, married and have a beautiful seven-month-old girl named Alta. I think about where my life has taken me these past nine years and am now loving every minute of it. Just then my mind starts wandering… “what if I tear my ACL again,” I think to myself. “Are there patrollers nearby?”

I do my best to turn off these thoughts as I pop into my skis and side-step to the peak. The cornice, rocks and chute all come into view now. “This is where I tore my ACL… this is where I was hauled down from in a toboggan… this is where I kissed one season goodbye and began the long road of ACL rehab,” I thought to myself. “Today, you’re mine!” 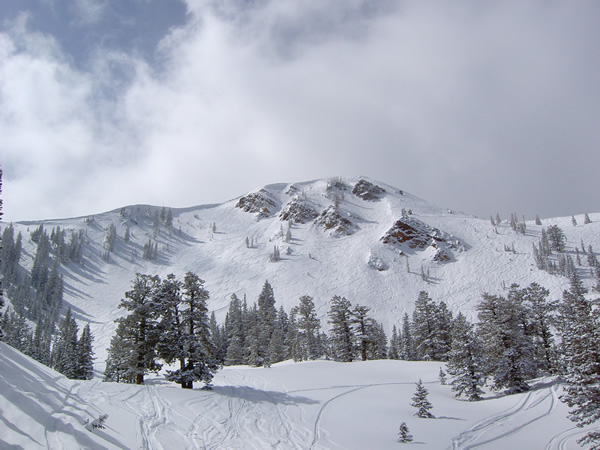 All alone at the top of the peak, I had some slight hesitation, but quickly dropped into Machete’s–stopping just before it fans out to Puma Bowl to take a good look and snap a couple of pictures. I was one of only 2-3 people who had skied Machete’s so far that day, but nobody else had the history with that chute that I did. As I snapped those turns down the windbuffed snow, I felt vindicated and relieved. And, as I cleared the chute and began linking wide turns down the nearly untracked Puma Bowl, nothing could wipe the smile off my face.

I had returned to the scene that changed my life forever. All those months of rehab and over a million vertical feet over the past nine years prepared me for this moment where I would take it to the mountain that took it to me. I returned to Jupiter… I stayed on target… and I spanked it. Some people have never been to Jupiter, but I’ve been there once and failed, only to return once more and tackle it head-on.