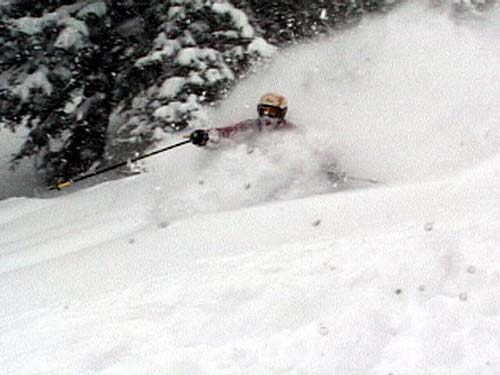 “P” is for April Powder

This ski season has been less than stellar for the Wasatch Mountains of Utah. We’ve seen little snowfall and warm temps be the norm… until now! Yes, it’s April, but winter isn’t done yet.

Those unfamiliar with Utah winters may not know that April is typically the best month for pow along the Wasatch Front. Deep bases and low crowds ensure short lift-lines and deep, untracked pow when Mother Nature decides to dump five feet of the white fluff.

This week was one of those weeks. The sky just kept puking and puking. Day after day, the snow kept piling up. Kendall and Brig feasted on the fluff and want their stories to be heard.

I get the “White Room” call every day, “Dude, wish you were here skiing the TWO FEET OF UNTRACKED with us. Too bad your sick bro!”

This week, Brig, riding for Line Skis and ICE poles logged some turns on the new Line Motherships. They are Line’s version of the super-fat twin-tip. Brig has perma-grin.

And Kendall, waiting patiently for his long-awaited Salomon AK Rocket’s, finally mounted ’em up and took ’em out to carve up the pow. Look for detailed product reviews soon.

I’m jonesing… big-time. I want to enjoy the April pow, but the Doc says no. I’ll be up there soon enough, until then I’ll dream of buffed-out singletrack this summer.

The season is almost over, but don’t tell that to Mother Nature… she’s blessing Utah with the white bounty. Go get some! And while you’re at it, get some Salomon AK Rocket’s to celebrate.