The weather the past couple of weeks here in Utah has been dominated by high pressure and sunshine with the inevitable heavy dose of inversion, our wintry foe. People have been skiing big lines across the Wasatch as the avalanche danger has dropped to “low”. And what of the snow? I’m sure most will agree that the snow quality hasn’t quite been the stuff we’re famous for.

With traveling across the country the past two weeks I haven’t missed out on much but I do have a serious jones for skiing pow. Aside from the regular text message updates and voice messages from friends, I’ve been getting my fix by repeatedly watching The Pact, a telemark film from the Powderwhores.

The Powderwhores, a collection of die hard powder seeking telemark skiers, was born of pure passion and the love of telemark skiing. I think in the beginning it was never about making a big name for themselves or making a bunch of cash. The cool thing is, even after basically establishing themselves as the premier telemark and backcountry skiing film company, they are as down to earth and hard charging as ever.

In the skin track they are as friendly as the next guy and are what I would consider great ambassadors of the pursuit of powder.

Since introducing their first film PW05 their following has grown, often as a result of untold hours of promotion and work. I can respect and understand the amount of work they put into the film tour each fall as they’ve grown it to be nationwide.

After PW05, PW07 and PW08 they went against the grain and came out with The Pact this season. What is the pact?

“The Pact” is born of early mornings, broken trails, frostbite, sunrises, worn meniscus, close calls, and countless face-shots. In the end, it’s about commitment to the endless search for untracked snow and those who have chosen to break that trail.

Although at first I found the format of The Pact to be a bit awkward, the talent of skiing and the ridiculously deep powder shot after powder shot soon had my attention. Mid way through the film after seeing the Japan segment it helped seal the deal that I need to get to Japan to ski.

Another segment that stands out for me is the final segment about EJ Poplawski and his amazing recovery and return to skiing following a spooky crash and the amputation of his leg. Whether you ski or not, this story will have you admiring the determination of the human spirit.

I am usually all about skiing lines in the backcountry but Jonah Howell’s Meadow Skipping segment not only delivered the stoke but it also took a little shot at those that poo-poo the simple pleasure that is meadow skipping. 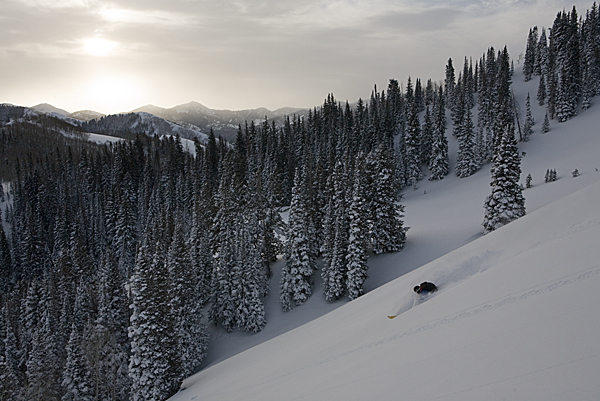 Lastly, the music in the film is worth keeping it playing in the background even if you’re not watching. I’ve had it playing a couple of times on my laptop just to hear the music. One of the bands I liked is Emancipator.

Bottom Line on The Pact from Powderwhores

Irregardless of if you’re a tele skier or not, The Pact is top 3 this season for all ski films and something worth having in your collection. Beyond the continual stoke and enjoyment of watching The Pact is the feel good of supporting guys like you and me who make ski films that are passion driven.