I’ve caught glimpses of this new binding a few times over the past year or so, but finally Salomon and Atomic are ready to make things official and stuff. Yesterday they unveiled the Salomon Guardian 16 and Atomic Tracker 16 alpine touring ski bindings. The differences between the two bindings will be skin deep as both will be identical.

Built as a competitor to the beloved Marker Duke binding, the Guardian/Tracker will make the transition from touring to ski mode something you can do without disengaging. While that sounds like old-hat for all of us backcountry guys, it’s a direct stab at Marker which requires boot removal to change modes (a serious flaw, IMO).

Retail prices have yet to be announced but both the Guardian and Tracker will have the same retail price and won’t hit the shelves until a year from now. Expect to see some of these on the slopes before the 2011-2012 season ends, but don’t count on getting a pair for yourself until this time next year. 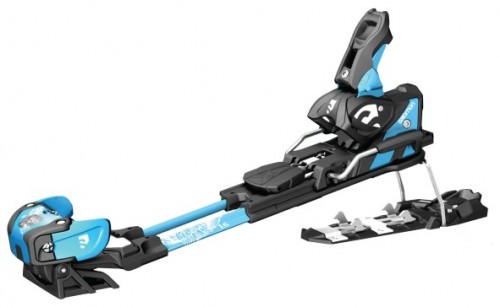 Ogden, UT—October 17, 2011 — With more and more skiers looking for escape in the mountains, seeking untracked snow and an intense way to experience nature, Salomon and Atomic are excited to introduce a new backcountry binding in the fall/winter of 2012, poised to become the benchmark for all snow adventurers.

What happens when the world’s two leading winter sports brands bring together their most creative experts and athletes to develop a backcountry binding? The result is the next generation of freeride performance. The new SALOMON Guardian 16 and ATOMIC Tracker 16 feature unique advantages for every outing into the backcountry.

UNMATCHED SKIING PERFORMANCE
This new premium binding, to be sold as the SALOMON Guardian 16 and the ATOMIC Tracker 16, will change the way skiers approach and enjoy the backcountry. It is designed to provide the highest level of confidence, efficiency, and feel in downhill performance for a heightened skiing experience. The binding’s Low Profile Chassis features a lower stand height for greater stability and enhanced terrain feedback, and the Oversized Platform enables maximum power transmission and responsiveness for quick and more precise turns.

HIKE & RIDE TECHNOLOGY FOR PRACTICAL AND INTUITIVE HANDLING
By offering the most convenient and time-saving transition from hiking to riding, the binding helps enable a better experience in the mountains. Beyond its greater transition efficiency, this design also helps reduce the hazards and inconvenience involved in taking off your skis on difficult terrain. Featuring the Hike & Ride Switch, which is easily engaged with your ski pole, it is no longer necessary to remove your skis when switching between hiking and riding modes. After climbing, simply use your ski pole to flip the climbing bar to skiing position, step down with your heel until the binding locks securely into place, and you are ready for the turns you’ve just earned. Above all, the new Salomon Guardian 16 and Atomic Tracker 16 bindings provide the power, precision and on-snow feel of a high-performance free ride binding, with the benefits of a very convenient hiking system.